An Education in History - Heritage Perth. Our History. Indigenous history. 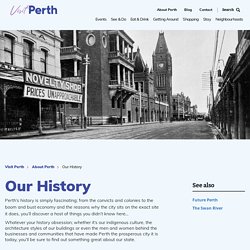 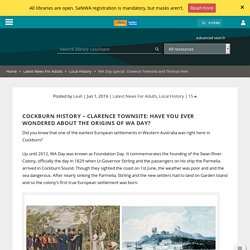 Did you know that one of the earliest European settlements in Western Australia was right here in Cockburn? Up until 2012, WA Day was known as Foundation Day. Peel Thomas. Biography - Thomas Peel - Australian Dictionary of Biography. Thomas Peel (1793-1865), colonial promoter and landowner, was born in Lancashire, England, probably at Peelfold, near Blackburn, the second son of Thomas Peel and his wife Dorothy, née Bolton. 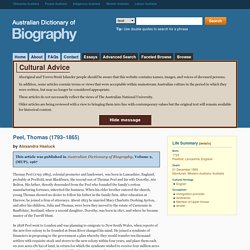 His father, directly descended from the Peel who founded the family's cotton manufacturing fortunes, inherited the business. When his elder brother entered the church, young Thomas showed no desire to follow his father in the family firm. After education at Harrow, he joined a firm of attorneys. About 1823 he married Mary Charlotte Dorking Ayrton, and after his children, Julia and Thomas, were born they moved to the estate of Carnousie in Banffshire, Scotland, where a second daughter, Dorothy, was born in 1827, and where he became master of the Turriff Hunt. In 1828 Peel went to London and was planning to emigrate to New South Wales, when reports of the new free colony to be founded at Swan River changed his mind.

As he grew older and poorer and crustier, and more withdrawn, he became a legend. Charles howe fremantle captain of the hms challenger. Admiral Sir Charles Howe Fremantle - Brompton Cemetery. The city of Fremantle in Western Australia is named after this British naval officer. 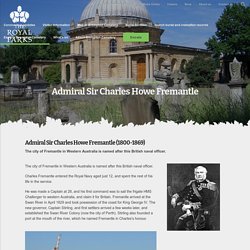 Charles Fremantle entered the Royal Navy aged just 12, and spent the rest of his life in the service. Charles Fremantle Facts for Kids. Early life Career Fremantle left the Swan River Colony on 25 August 1829, for the British Army base of Trincomalee, Ceylon (now Sri Lanka) where he was based the next couple of years. 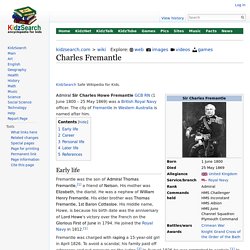 While he was there he visited many places including Kowloon. He told the British government that this would be a good site for a British settlement. They agreed and Hong Kong was settled in 1841. On his way back to England in September 1832, he made his second and final visit to the Swan River Colony. In 1855 he served as Rear-Admiral controlling the naval transport service for the Crimean War from Balaklava (a city in the Ukraine).[1] Australian settler. Sir james stirling western australias first governor. John septimus roe western australias first surveyor general. John Septimus Roe: Remembering the man who mapped out Perth. As the first surveyor general to the fledgling Swan river colony, John Septimus Roe's designs for the streets and parklands of Perth are still shaping the city. 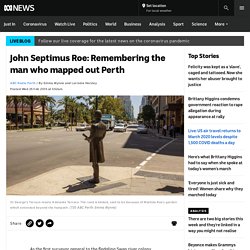 His former home on the corner of Adelaide Terrace and Victoria Avenue is long gone, replaced by an office tower named John Septimus Roe Square, but his memory is preserved in a statue that looks down the terrace he laid out. "He was very significant to the creation of Perth," Richard Offen from Heritage Perth said. John Septimus Roe Facts for Kids. Western Australia - History. Human occupation of the southwestern part of Western Australia dates to at least 40,000 years ago. 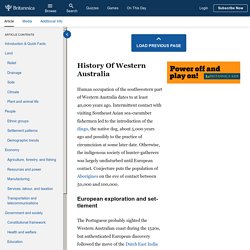 Intermittent contact with visiting Southeast Asian sea-cucumber fishermen led to the introduction of the dingo, the native dog, about 5,000 years ago and possibly to the practice of circumcision at some later date. Otherwise, the indigenous society of hunter-gatherers was largely undisturbed until European contact. Conjecture puts the population of Aborigines on the eve of contact between 50,000 and 100,000. European exploration and settlement. Western Australia - CBHS Year 5 History. The Swan River Colony was a new venture in the colonisation of Australia. 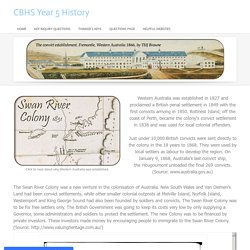 New South Wales and Van Diemen’s Land had been convict settlements, while other smaller colonial outposts at Melville Island, Norfolk Island, Westernport and King George Sound had also been founded by soldiers and convicts. The Swan River Colony was to be for free settlers only. The British Government was going to keep its costs very low by only supplying a Governor, some administrators and soldiers to protect the settlement. The new Colony was to be financed by private investors. These investors made money by encouraging people to immigrate to the Swan River Colony. Download File Source: Click on the below images to access more information Western Australia's Founders.

History of Fremantle, Western Australia from 1829 to WWII (1945) Arrival in Fremantle. 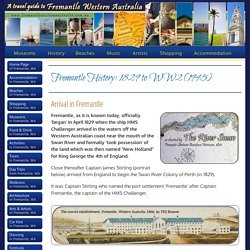 Founding of Perth. Founding of Perth On 2 May 1829 Captain Charles Fremantle, commander of the Challenger, raised the British flag and claimed the west coast of Australia for Britain. 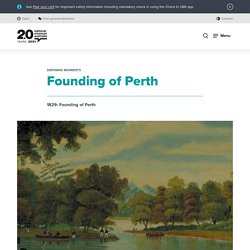 Shortly afterwards, the first Swan River settlers arrived on the Parmelia and the Sulphur. The colonisation of Whadjuk country began with the reading of an official proclamation at Garden Island on 18 June, naming James Stirling as lieutenant governor. Stirling soon realised that the soil on the coast was not suited to agriculture. He decided to establish two towns in the new settlement: a commercial port at Fremantle and a capital — which he named Perth after the Scottish city — about 19 kilometres up the Swan River. On 12 August 1829 a large party travelled through the bush to lay the foundation stone for Perth. Early struggles Intense interest in the Swan River Colony in Britain resulted in a rush of people applying to emigrate. Lieutenant-Governor Stirling to Sir George Murray, Perth, 1830: Frontier conflict Convicts arrive.

Swan River Colony. The first British settlement in western Australia was the Swan River Colony, founded in 1829. It represented a change in Great Britain’s approach toward the settlement of Australia. While the earlier colonies in the southeast were mainly convict settlements, Swan River was established as a colony for free settlers. Two decades of struggle, however, eventually brought an end to the experiment. When the British settled in New South Wales in 1788, western Australia was unoccupied by Europeans.

It remained so for some 40 years. Swan River Colony Facts for Kids.