If you or your loved one has been injured in an accident caused by someone else, N. Craig Richardson can help you develop a comprehensive and aggressive legal strategy to pursue compensation for the losses you have been forced to endure.

Hire a Car Accident Attorney can make a big difference to obtain a fair compensation. Things You Should Know About Medical Lien. Medical liens are not an uncommon thing, rather they are part and parcel of almost every other accident. 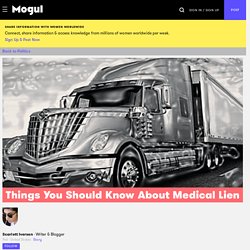 If you got injured and won a jury verdict or settlement regarding your personal injury, you may have to pay back the party who paid for the medical treatment of yours. There are both federal and state laws that determines the claim a health provider can make from your accident case. These laws are usually confusing and complicated. What to Consider When Hiring a Personal Injury Attorney. Have you been in an accident? 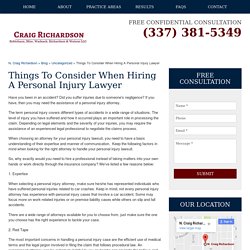 Did you suffer injuries due to someone’s negligence? If you have, then you may need the assistance of a personal injury attorney. The term personal injury covers different types of accidents in a wide range of situations. The level of injury you have suffered and how it occurred plays an important role in processing the claim. Depending on legal elements and the severity of your injuries, you may require the assistance of an experienced legal professional to negotiate the claims process. Things To Consider When Hiring A Personal Injury Lawyer. Things You Should Know About Third Party Insurance Claims. Have you been involved in an accident where you were a passenger in a car and were injured? 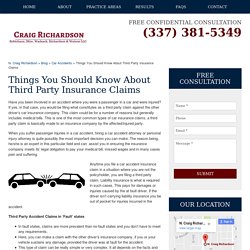 If yes, in that case, you would be filing what constitutes as a third party claim against the other driver’s car insurance company. This claim could be for a number of reasons but generally includes medical bills. This is one of the most common types of car insurance claims, a third party claim is basically made to an insurance company by the affected/injured party. Four Reasons Why You Need A Car Accident Attorney. The moments following a car accident can leave you rattled, you may be unsure of how you feel as you are trying to figure out what just happened. 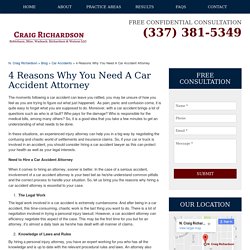 As pain, panic and confusion come, it is quite easy to forget what you are supposed to do. Moreover, with a car accident brings a lot of questions such as who is at fault? Who pays for the damage? Who is responsible for the medical bills, among many others? What You Should Know About Car Accident Claims in Lake Charles. It doesn’t matter if you were involved in an auto accident with a speeding motorist or you were injured by a distracted driver as a pedestrian, your first course of action after getting immediate medical attention is to call speeding accidents Lake Charles attorney as soon as possible. 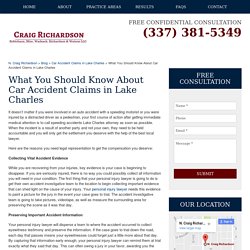 When the incident is a result of another party and not your own, they need to be held accountable and you will only get the settlement you deserve with the help of the best local lawyer. Here are the reasons you need legal representation to get the compensation you deserve: Collecting Vital Accident Evidence While you are recovering from your injuries, key evidence is your case is beginning to disappear. If you are seriously injured, there is no way you could possibly collect all information you will need in your condition. Eight Passengers Taken To The Hospital After Car Wreck Involving An 18-wheeler.

On March 7th Baton Rouge Police reported an accident involving an 18-wheeler and a vehicle carrying 5 children and 3 adults. 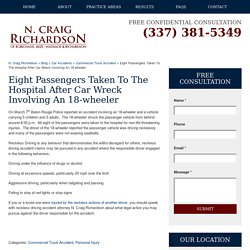 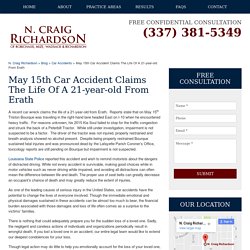 Reports state that on May 15th Triston Bourque was traveling in the right-hand lane headed East on I-10 when he encountered heavy traffic. For reasons unknown, his 2015 Kia Soul failed to stop for the traffic congestion and struck the back of a Peterbilt Tractor. While still under investigation, impairment is not suspected to be a factor. How Adverse can be an Industrial Accident Case in Lake Charles. Industrial Accidents Lake Charles can be crippling to a worker's health, finances and family. 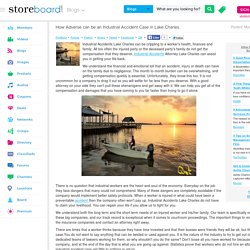 All too often the injured party or the deceased party's family do not get the compensation that they deserve. Industrial Accidents Attorney Lake Charles can assist you in getting your life back. 4 Ways Construction Accidents Can be Devastating and How Lawyers can help. Massive turnover plagues the trucking industry. Labor shortages have plagued the trucking industry since the 1980s as the US began its deregulation and the number of new trucking companies increased. 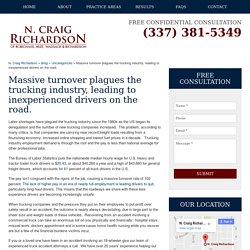 The problem, according to many critics, is that companies are carrying near record freight loads resulting from a flourishing economy, increased online shopping and lowest fuel prices in a decade. Trucking industry employment demand is through the roof and the pay is less than national average for other professional jobs. Lake Charles Maritime Injury Lawyers. Louisiana boasts one of the most successful maritime industries in the nation—one that also provides steady employment to many people in the Lake Charles area. 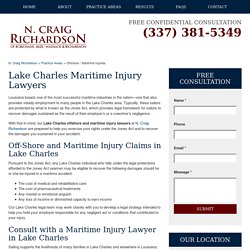 Typically, these sailors are protected by what is known as the Jones Act, which provides legal framework for sailors to recover damages sustained as the result of their employer’s or a coworker’s negligence. With that in mind, our Lake Charles offshore and maritime injury lawyers at N. Craig Richardson are prepared to help you exercise your rights under the Jones Act and to recover the damages you sustained in your accident. Off-Shore and Maritime Injury Claims in Lake Charles. Lake Charles Construction Accidents Lawyers. With so many workers performing so many different functions at any given moment, construction sites must be excellently managed to prevent dangerous conditions from arising. Additionally, specific safety violations put workers at an increased undue risk. Unfortunately, many employers and third-party contractors fail to take reasonable measures to protect workers and, as a result, construction accidents occur with some regularity.

As the Lake Charles construction accident lawyers at N. Craig Richardson know, the injuries sustained in these accidents can be devastating for victims and their families. Construction Accidents: Why You Should Consider Hiring an Attorney. Construction sites are notoriously hazardous, but when you add in pressure to perform under tight schedules on an already fatigued crew, the mental and physical strain can result in avoidable accidents. Heavy equipment, scaffolding , electricity, construction material trip hazards are but a few of the looming dangers. Worker fatigue has been known to escalate an already dangerous situation and while hundreds if not thousands of state and local regulations govern work site safety, when these rules aren’t followed it can result in injury, amputation and even death.

OSHA is still compiling statistics for 2016, but in 2015 they revealed 1,600 deaths in the natural resources, construction, and maintenance occupations. Poor oversight only makes the matter worse; serious injuries can occur because those tasked with ensuring safety fail to do so. Holiday Driving Accidents. Holiday Driving Accidents The holidays are known for being merry and bright, but they’re also known for being the deadliest season when it comes to drunk driving. Every holiday season, lives are lost due to drunk drivers. The odds of getting into a driving accident increase during periods when there are more cars on the road, such as rush hour, or when driving conditions are less than optimal, as during periods of inclement weather. But when the number of alcohol impaired drivers increases, the odds skyrocket. Five Common Causes Of Boating Accidents.

Indian Motorcycle Company recalls several models for potential fuel leak. New drivers are among the most dangerous on the road. New drivers are among the most dangerous on the road, racking up tickets and accidents at rates several times the rate of the average driver. Adding a teenage driver to your car insurance opens a new level of risk window, and will increase your rates; but you have some control over how much they’ll climb. Having teens drive a Camry rather than a Corvette, encouraging them to bring home report cards with straight A’s, and urging them to keep their driving records clean can all have a major impact on rates and their safety. “Putting your teen in a big, boring vehicle is going to be a lot easier on the wallet and offer more protection in an auto accident than giving them the zippy small car they may want,” says Russ Rader, spokesperson for the Insurance Institute for Highway Safety (IIHS).

Motorcycle Accident Claim Lake Charles. As in the rest of the country, drivers in Lake Charles often do not take enough care when sharing the road with motorcyclists. Sadly, motorcycle accidents occur in Lake Charles with concerning regularity, often as the direct result of this lack of caution. Unfortunately, motorcyclists are inherently vulnerable in an accident due to their lack of physical protection, and the results of these accidents can be devastating to victims and their families. The Lake Charles motorcycle accident attorneys at N. Cold Stress and Frostbite are avoidable workplace hazards per OSHA. Lake Charles Truck Accident Lawyers. Many deadly accidents caused by teens involved over speeding. Boating accidents in Louisiana have already claimed 9 lives this year.