Ranked: The 20 Most Populous Cities in the World. More than half of the world’s population currently lives in cities—and as time goes on, it’s clear that more urban dwellers will find themselves living in megacities. 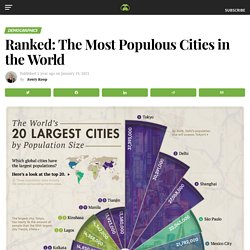 Megacities are defined as urban areas with a population of more than 10 million people. This means that the world’s top 20 most populous cities are all megacities. This visualization, using data from Macrotrends, shows the 20 most populous cities in the world. Rapid Urbanization Today, more than 80% of people in higher income countries find themselves living in urban areas, and in upper-middle income countries the number lies between 50-80%. Rural-to-urban migration is an increasingly relevant trend in the 21st century. New paper with @CJHoole and @stehincks just out "The contours of a new urban world? Megacity population growth and density since 1975. The Spectator Index sur Twitter : "Cities by total wealth. ($ trillion) New York City: 3 London: 2.7 Tokyo: 2.5 San Francisco: 2.3 Beijing: 2.2 Shanghai: 2 Los Angeles: 1.4 Hong Kong: 1.3 Sydney: 1 Singapore: 1 Chicago: 0.98 Mumbai: 0.95 Toronto: 0.94 Fra.

Animated Map: The 20 Most Populous Cities in the World by 2100. In Africa Alone, 13 Cities Will Pass NYC in Size The Chart of the Week is a weekly Visual Capitalist feature on Fridays. 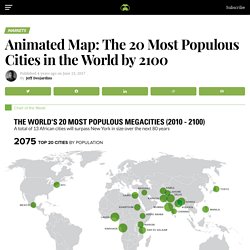 If you look at a modern map of the world’s most populous cities, you’ll notice that they are quite evenly distributed around the globe. Metropolises like Moscow, New York, Tokyo, Cairo, or Rio de Janeiro are spread apart with very different geographic and cultural settings, and practically every continent today can claim at least one of the world’s 20 most populous cities. In the future, things will be very different, according to projections from the Global Cities Institute. In fact, over the next 80 years or so, some cities will literally 10x or 20x in size – turning into giant megacities that have comparable populations to entire countries like modern-day Germany, France, or the United Kingdom.

BBC News - Michael Wolf: The man who found beauty in megacities. The great sprawl of China: timelapse images reveal 30-year growth of cities. Thirty years ago, most of these cities were barely on the map. 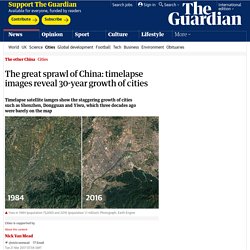 Take the trade hub of Yiwu, pictured above. In 1985 it was home to 73,000 people; 20 years later that had risen to 1.1 million – population growth of 1,380%. Now their staggering growth has been captured by Google’s Earth Engine timelapse interactive of satellite photography from 1984 to 2016. To identify the fastest-growing Chinese cities over that period, we used the latest UN World Urbanisation Prospects population data, and calculated the highest percentage growth from 1985-2015, filtering for cities with current estimated populations above 1 million.

Below are the 10 fastest growers. 10 cities are predicted to gain megacity status by 2030. Think of the biggest cities in the world. 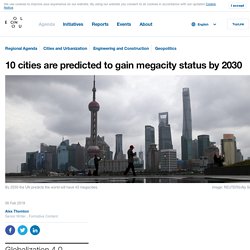 The megacities. True giants with populations of over 10 million people. Tokyo will, of course, be on your list. So too Delhi, Shanghai, Mexico City, New York, Cairo. Possibly Lagos, Jakarta and Chongqing if you pride yourself on keeping your geography general knowledge up to date. But Chengdu? Photographer Carlos Barria spent some time in Shanghai, China, the fastest-growing city in the world in 2013. He took these amazing shots, recreating the same framing &amp; perspective as a photograph taken in 1987 and 26 years later. *****360 Shanghai: Picture taken in China □□ with a 24.9 billion pixel camera □- Pretty awesome stuff! Twitter. Can #Asia turn its megacities into "supercities. James O'Malley sur Twitter : "This is one of the most astonishing things I've ever seen (only mild hyperbole). This is the view from the train between two stops on the metro in outer-Shanghai. If you've ever wondered how China has room for 1.3bn people...

Mapping the World’s New Megacities in 2030 □️ (See full infographic. #Map compares the GDP of Chinese cities with global economies. These cities are huge and attractive markets for consumer products and all types of services. Source. #Map shows the 50 largest city economies in the US (bubble size) and their economic growth between from 2016 to 2017 (bubble colour). Source. The #PearlRiverDelta is the world's largest conurbation. Growth has been unbelievable over the last two decades. Interesting read, gt for students studying global cities @GeogAdvisor… Simon Kuestenmacher sur Twitter : "We hear a lot about the most liveable cities in the world (congratulations #Vienna and #Melbourne) while the least liveable cities aren't often discussed. These cities have massive problems and need structural help. Sour.

*****Millionaire cities: Chinese cities with over one million residents have been growing at breakneck speed over the last 50 years.… World City Populations Interactive Map 1950-2035. The Global Urban Transformation This map visualises the radical transformation that has occurred across the globe in the last 60 years, from a 30% urban world in 1950, to a 54% urban world in 2015 and a predicted 68% urban world in 2050. 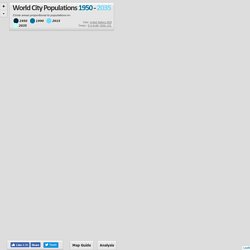 In 1950 there were 740m people living in cities; there are now 4 billion, rising to a predicted 6.6b by 2050. The circles on the map are proportional to city populations in 1950, 1990, 2015 and 2035. Move your mouse over cities to explore their detailed dynamics. Data is from the UN World Urban Propospects 2018. Industrialisation and urban growth in the 19th and early 20th centuries were powered by Western Europe and the North-Eastern USA, but the urban population of these regions has been relatively static since 1950. The pace of recent change at the city level is unprecedented in human history. Small towns like Shenzhen, Xiamen and Dubai have become cities of several million in little over two decades. Overpopulation, overconsumption – in pictures. The 100 million city: is 21st century urbanisation out of control? 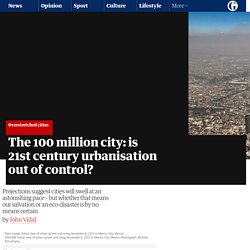 Paved roads quickly turn to dirt, and fields to forest. There are few buildings over six floors high and not many cars. No one foresaw what happened next. In just two generations Lagos grew 100-fold, from under 200,000 people to nearly 20 million. Two kids pose for the camera at Hong Kong's Quarry Bay.… These are Asia's cities to watch. At the heart of every emerging economy are the dynamic cities powering their rapid development. 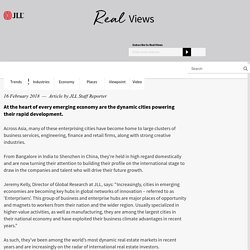 Across Asia, many of these enterprising cities have become home to large clusters of business services, engineering, finance and retail firms, along with strong creative industries. From Bangalore in India to Shenzhen in China, they’re held in high regard domestically and are now turning their attention to building their profile on the international stage to draw in the companies and talent who will drive their future growth.

Jeremy Kelly, Director of Global Research at JLL, says: “Increasingly, cities in emerging economies are becoming key hubs in global networks of innovation – referred to as ‘Enterprisers’. This group of business and enterprise hubs are major places of opportunity and magnets to workers from their nation and the wider region. These are Asia's #cities to watch #enterprise… Striking @Telegraph maps show the rapid growth of 12 African cities, 1950-2025. The story of cities, part 1: how Alexandria laid foundations for the modern world. The secret to Alexandria, if classical historians are to be believed, lies in a golden casket. 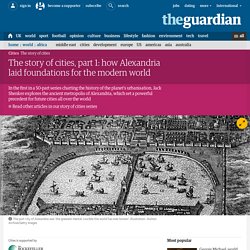 Studded with jewels and small enough to hold in one’s hands, the casket was a war trophy found in the lodgings of vanquished Persian king Darius III more than 2,300 years ago. The man who defeated Darius, Alexander the Great, locked his most treasured possession – the works of Homer – inside it. Soon after conquering Egypt, Alexander had a dream in which Homer visited him and spoke lines from The Odyssey. Among them was a reference to the Egyptian island of Pharos in the Mediterranean, and so the next morning Alexander travelled to Pharos and stood upon its rocks, clutching the golden casket and staring out at a scrappy, forgotten stretch of coastline. After a long silence, he nodded.