GROUND FIRES aka UNDERGROUND or SUBSURFACE FIRES or ZOMBIE FIRES

South Korea wildfire 2019. Nice article and some good data that would be a good practice 6 mark analyse question #Year13 #Hazards #Wildfires. I also created an animated version which helps to emphasize how weather conditions during California's fire season have evolved over time. #CaliforniaFires #ClimateChange… "[Finland] spent a lot of time raking and cleaning and doing things and they don't have any [forest fire] problem. And when they do it's a very small problem. Brian Krassenstein sur Twitter : "Trump believes that not raking leaves is a bigger cause of the California wild fires than climate change. That's like saying the cause of a Tsunami was not from an earthquake, but rather the bird that dove into the ocean. Satellite imagery from before and after the Camp Fire is just horrifying…

Insane footage of the California fires. □ It looks like the mouth of hell, but this guy stays remarkably calm as he drives his child to safety.......#dadoftheyear… #DEVELOPING From a safe distance...just shot this video of a #FireDevil at the #Campfire near #Paradise. #abc7now @LiveDoppler7… 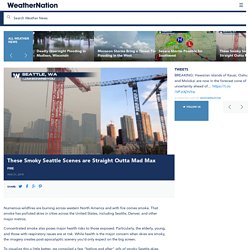 That smoke has polluted skies in cities across the United States, including Seattle, Denver, and other major metros. Concentrated smoke also poses major health risks to those exposed. Particularly, the elderly, young, and those with respiratory issues are at risk. While health is the major concern when skies are smoky, the imagery creates post-apocalyptic scenery you’d only expect on the big screen. To visualize this a little better, we compiled a few “before and after” gifs of smoky Seattle skies.

The Needle. The Skyline. The Puget Sound. Hansville over the Sound. The Olympics. Unfortunately the smoke is looking to stick around for the next day or so as fires continue to burn and stagnant air remains in place. Written by Dakota Smith. Twitter. Great job of #B747 globalsupertank while fighting the fire □ #HolyFire ((video by @ABC7 helicopter))… Extraordinary footage of a massive fire tornado in the #CarrFire back in July, released by Cal Fire yesterday. More photos from the California #wildfires here Jo… There have been 11 wildfires inside the arctic circle this year.

For some perspective this is what it looks like from Seattle to Sacramento at 30k feet. □Yvette Ferreira #CAfires… WEATHER/ METEO WORLD sur Twitter : "With all the #wildfires ongoing across parts of #Europe at the moment, have you ever wondered what it is like to be a little close to a Canadair water bomber? I so here’s something for you! #severeweather #extremeweathe. Severe-weather.EU sur Twitter : "Never forget how quickly a fire can spread! This is particularly valid now that much of Europe is enjoying hot weather and some areas are under intense heat waves. Look at the speed at which this fire spreads! This happene.

A brush fire that broke out near Griffith Park in Los Angeles on July 10, 2018, has sparked the evacuation of more than 2,000 people from Griffith Observatory, @GriffithObserv… Stunning natural color loop of fires burning in Oklahoma yesterday. Just published my first graphics story for @PostGraphics (working with the awesome @Timmeko @emamd & @chrisalcantara)! "The grim scope of 20… Here's What We Know about #Wildfires and Climate Change - Scientific American. Great job getting the message out there, DeMille's Farm Market in Salmon Arm! #BCwildfires. Wildfires are massively raising air pollution and endangering human #health #climate. *****#Vesuvio / Vesuvius surrounded by wildfires (nothing to do with the volcano!) BC Wildfires' light pierces through cloud cover in this polar orbiting satellite image from last night #BCwildfire @weathernetwork.

A New Algorithm to Find Wildfires When It's Cloudy ~ GIS Lounge. Determining where and when wildfires could strike could help save lives and keep precious forestland from burning down. 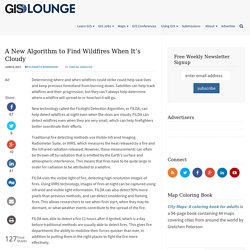 Satellites can help track wildfires and their progression, but they can’t always help determine where a wildfire will spread to or how fast it will go. New technology called the Firelight Detection Algorithm, or FILDA, can help detect wildfires at night even when the skies are cloudy. FILDA can detect wildfires even when they are very small, which can help firefighters better coordinate their efforts. Traditional fire detecting methods use Visible Infrared Imaging Radiometer Suite, or VIIRS, which measures the heat released by a fire and the infrared radiation released.

However, these measurements can often be thrown off by radiation that is emitted by the Earth’s surface and atmospheric interference. FILDA uses the visible light of fire, detecting high resolution images of fires. The technology behind FILDA can be used for a variety of other applications. More: