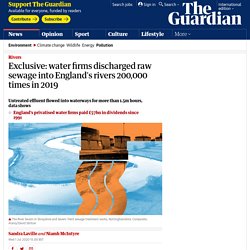 The analysis reveals untreated human waste was released into streams and rivers for more than 1.5m hours in 2019. The figures, obtained via environmental information requests, trace releases of sewage from storm drains in rivers across England by all nine water companies and provide a comprehensive picture of the scale of pollution from what critics say is the routine dumping of untreated sewage. Popular English rivers including the Thames, the Windrush, which runs through the Cotswolds and Oxfordshire, the River Chess, a chalk stream in Buckinghamshire, the Avon in Bristol, the Severn, and the River Wharfe in Ilkley are among the many affected. Humans a more immediate threat to large river systems than climate change. June 19 (UPI) -- Climate change promises to disrupt a variety of natural systems across the globe, but new research suggests human activities pose a more immediate threat to the planet's largest river systems. 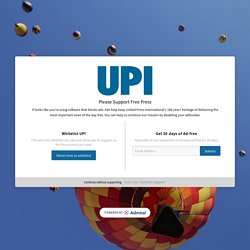 The new survey identified a variety of human activities that hamper the natural resiliency of major river systems, including: damming, dredging, land-use change, pollution, introduction of non-native species, water diversion and subsidence caused by groundwater extraction. "These are in addition to those of climate change -- flooding and droughts -- and greenhouse-gas linked sea-level rise," lead study author Jim Best told UPI in an email. The crux of the paper echoes the warnings issued by a variety of other recent studies -- that the threat of rising temperatures and rising seas has overshadowed other serious ecological problems, from habitat loss and overfishing to invasive species and agricultural runoff. How Does Eutrophication Work? Causes, Process and Examples. Thames CSO Alerts sur Twitter : "Rower notification from Thames Water:  Hammersmith Pumping Station (PS) Following the recent rainfall, Hammersmith Pumping Station has in the last hour discharged untreated sewage into the River Thames, due to lack of capa.

"Toothless watchdog lets water giants set own fines." Research conducted by @jameshbrand &amp; @DrKateSpencer on toxic landfill sites was last night highlighted on @BBCNews - watch the full news item here. A foreshore clean-up in South London earlier this week, saw one of our crews collect nearly 70 SHOPPING TROLLEYS. Read more #thames #london @thameslitter… *****Eutrophication - algal bloom: All 21 of Mississippi's beaches are closed because of toxic algae (HAB) Along the state's Gulf Coast, all 21 of the state's beaches have been shut down for swimming due to a blue-green harmful algal bloom (HAB), according to the Mississippi Department of Environmental Quality (MDEQ). 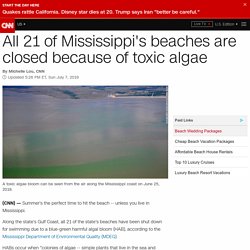 HABs occur when "colonies of algae -- simple plants that live in the sea and freshwater -- grow out of control and produce toxic or harmful effects on people" or wildlife, the National Oceanic and Atmospheric Administration (NOAA) says. The toxic algae can cause rashes, stomach cramps, nausea, diarrhea and vomiting, the state agency warned. Though the state says people can still use the sand portion of the beaches, they should avoid water contact or consumption of anything from the waters "until further notice. " You'll want to read this bit. Well @EnvAgency care to comment? "And yes, the EA did know about the pesticides. I’ve got documents that prove it. Not only did they know, they sanctioned it." *****Soil erosion: Every year run off from urban areas: agriculture in Mississippi catchment result in a hypoxic or dead zone in the Gulf of Mexico where little marine life can survive. This year, due to massive rainfall it’s forecast to be around.

Over a month ago, to protect their chalk streams, the French banned washing cars, watering gardens, sports fields &amp; golf courses, restricted agriculture irrigation, ordered industry to reduce water consumption by 10% and so far we have done what excat. 'Our water pollution is a cancer': Iraq is facing a water crisis - but this man is fighting the threat every day [tap to expand] Feargal Sharkey sur Twitter : "Following @BBCCountryfile's excellent piece on Hert's dying chalk streams it transpires the bromate pollution of the chalk aquifer now stretches all the way from St Albans to the River Lee at Great Amwell 20Km. @tomheapmedia. Geoscience EnvAgency sur Twitter : "The good old days weren’t necessarily always good as this article in ‘Popular Science’’ Jan ‘63 testifies to! Disposing of used engine oil into a hole in ground! Today 56 years later we all have a better understanding o.

Feargal Sharkey sur Twitter : "How to destroy a river in 16 seconds or less. Dollis Brook in Finchley earlier today, what the river should look like and 100 feet later, sewage foam and lots of it. Yep if you live in Finchley do not let your kids anywhere. Windrush WASP sur Twitter : "These images still shock us every time. Definitely not only surface water affected by CSO's. Riverfly Survey recently reported by WASP clearly shows massive decline of the Windrush River the further you test from its source. @

Guilty! □ #TheArchers… Silt/nutrient traps to reduce polluting agricultural runoff to rivers. *****How healthy are our rivers? - The Rivers Trust. Only 14% of rivers in England are considered to be at Good Ecological Status within the Water Framework Directive. 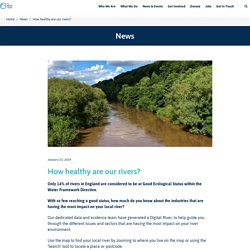 With so few reaching a good status, how much do you know about the industries that are having the most impact on your local river? Our dedicated data and evidence team have generated a Digital River, to help guide you through the different issues and sectors that are having the most impact on your river environment. Use the map to find your local river by zooming to where you live on the map or using the ‘Search’ tool to locate a place or postcode. Click here to view the map or see below: British rivers polluted by powerful insecticides #neonics #pollinators #ecology CC @cnconnollylab. Anne A Madden, Ph.D. sur Twitter : "Iron oxidizing bacteria in puddles. Often mistaken for oil pollution, the tell-tale mark is how the shine acts like broken glass when disturbed. Now you don’t have to be sad if you think your estuary is polluted. It *mi.

To be added to our Year 8 Scheme of Work.... a very up to date example of our impact (if the source is shown to be mineral extraction) #geographyteacher… Twitter. Each boat can collect several tonnes of rubbish a day. Read more. *****Eutrophication - algal bloom: A bloom of cyanobacteria in Lake Erie turned the water greenish. *****Eutrophication - algal bloom: Lake Erie Abloom #NASA. Serious farm pollution breaches rise in UK Many go unprosecuted #slurry #cleanwater #agriculture.

Fertilizer applied to fields today will pollute water for decades #soils #nitrates. *****New sponge could save our oceans from oil spills. These 100 popsicles are made with trash- and sewage-filled water : TreeHugger. *****After beating cancer, @LizzieOutside quit her job and traveled 400 miles on a paddle board to highlight plastic pollution.This is her story. *****Wow! Art students collected + froze polluted water from 100 Taiwan locations to spread awareness.