Hollywood Boulevard, “the walk of fame”, August 1963.… Children of slaves in the American South, 1860-1905.… Bustling Buffalo, New York, circa 1908. ''Erie County Savings Bank, Niagara Street.''… The New Jersey shore, circa 1905.… Detroit, Michigan, c.1906.… John Overholt sur Twitter : "You’re a European prints ntmaker in 1776, and there’s suddenly a hot market for images of American cities. The bad news is, you have no idea what they look like. The good news is, neither do your customers. Drive-in theater, South Bend Indiana, 1950s.… Farmer Street, Detroit, 1910.… We Know What The Country Looks Like Without The EPA: Filthy.

The Hollywood sign originally said 'Hollywoodland' when it was installed in 1923. The @GeorgiaDome in Atlanta was captured by #DEIMOS2 before & after it was brought down with 240 Tons of explosives on Nov. 20… A night shot on Canal Street in New Orleans, Louisiana. *****Atlantic City film: Discovering Kinemacolor – Luke McKernan. Kinemacolor was the world’s first successful natural colour motion picture system. 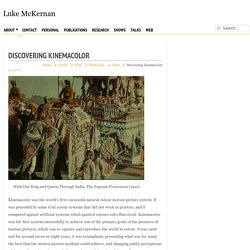 It was preceded by some trial colour systems that did not work in practice, and it competed against artificial systems which painted colours onto film stock. Kinemacolor was the first system successfully to achieve one of the primary goals of the pioneers of motion pictures, which was to capture and reproduce the world in colour. From 1908 and for around seven or eight years, it was triumphant, presenting what was for many the best that the motion picture medium could achieve, and changing public perceptions of that medium along the way. It features in most histories of the medium, as an important milestone in cinema’s development. Yet for the past one hundred years hardly anyone has seen it. Kinemacolor was not entirely lost, however. Then in 1992 came news of a substantial collection of Kinemacolor films, acquired from a private collector by the Archivio Cinematografico Ansaldo in Genoa. Links: An American Odyssey: Stunning Color Photos of the United States from the Late 1800s.

Traffic lights are made in Shreveport, Louisiana, and sent around the U.S. and abroad, December 1947. The gentrification of Washington DC: how my city changed its colours. The last time I returned to Washington DC, I arrived as I usually do, by train into Union Station. 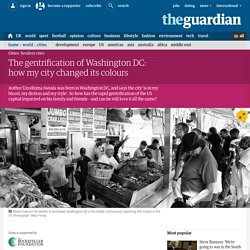 It was the end of March, the day before Easter Sunday, and the platforms teemed with travellers coming into town to see the city’s cherry blossoms, gifted to the city more than a hundred years ago by the mayor of Tokyo. The colonnade of delicately blossomed trees along the Tidal Basin walkway to the Jefferson Memorial is a historical and aesthetic delight for visitors; but for me, as a child, they were a harbinger of Washington’s aggressive hay fever season. When I was in high school, I would do my best to run speed workouts on the track while inhaling my own snot and wheezing through pollen-aggravated wind pipes.

As an adult, I discovered Claritin and my whole world changed. Here are the Smithsonian Museum buildings, many of which I entered as a child on school field trips. Washington DC is not a subtle city. PHOTO OF THE DAY: Mark Twain in his garden (colourised). Baby cages designed for toddlers that lived in apartment buildings to get enough fresh air, 1939. When L.A. Was Empty: Wide-Open SoCal Landscapes. *****USA School playground equipment in the year 1900. St. Louis, Missouri, 1904. The Jersey Shore, 1905. The Jersey Shore circa 1910. Bathers at Atlantic City. American family living in a shanty, circa 1930's. 1936 Young family, penniless, hitchhiking on U.S. Highway 99, California. November, 1936. (Photo by Dorothea Lange) Flippin' Burgers, 1938 (colorized)

Air pollution in Pittsburgh, 1940. 1940 This is what Pittsburgh looked like back in the heyday of coal. *****A wealthy group of yp relax by a pool in California, 1940. Coca-Cola Delivery Truck, 1940's. This picture is from 1942. The photo quality is absolutely amazing. World War 2 Welder, 1945. Coney Island, NYC, 1949. Coney Island in 1949. Playing in the snow in the driveway, Warren, Ohio, 1951. 1951 Tourists explore massive dead tree with tunnel cut out for a road in Sequoia National Forest, May 1951. Drive-in theater, South Bend Indiana, 1950s. Perfectly Preserved 1950s Time Capsule House Is For Sale. If you’re looking for a home that is going to take you back in time, this is one that you certainly have to take a look at it. 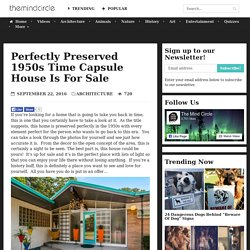 As the title suggests, this home is preserved perfectly in the 1950s with every element perfect for the person who wants to go back to this era. You can take a look through the photos for yourself and see just how accurate it is. From the decor to the open concept of the area, this is certainly a sight to be seen. The best part is, this house could be yours! It’s up for sale and it’s in the perfect place with lots of light so that you can enjoy your life there without losing anything. Carlos Cardoza: Behance via [Mental Floss] All images via Virginia Cook Realtors. Main Street, Deadwood, South Dakota, 1952. Daytona Beach, Florida, late-1950s.