*****Spatial structure of LIDC cities. Living on the edge: São Paulo’s inequality mapped. Less than 10 miles of concrete sprawl separates the São Paulo neighbourhoods of Jardim Paulista and Jardim Ângela, but that gap grows to almost 24 years in the life expectancy of people living there. 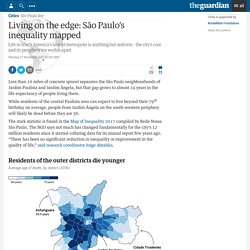 While residents of the central Paulista area can expect to live beyond their 79th birthday on average, people from Jardim Ângela on the south-western periphery will likely be dead before they are 56. *****Time-lapses show just how crowded Chinese cities have become. Approximately 1.4 billion people — roughly 20% of the world's population — live in China. 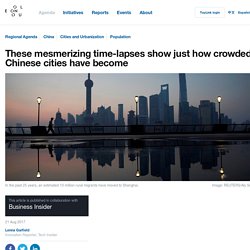 By 2020, China aims to move 100 million of those people from rural areas into cities — a goal the government unveiled in 2013 in its 23-year plan for urbanization. By 2026, China hopes to move 250 million into cities. The country hopes that relocating people into urban environments will give the economy a big boost. The plan is relatively new, but China has been urbanizing for the last 40 years. As The Guardian notes, China now has over 600 cities, many of which were small towns and farms just a few decades ago. The country's exponential population growth is evident in the time-lapse images, captured by Google satellites. In the past 25 years, an estimated 10 million rural migrants have moved to Shanghai. Image: The Guardian A new megacity, called Xiongan, is set to be built near Beijing in an attempt to take pressure off the larger metropolis. Image: Next City Image: CityLab Share. Sierra Leone mudslides: Urgent plea for help as death toll rises.

Media playback is unsupported on your device Sierra Leone needs "urgent support" for thousands of people hit by mudslides and massive flooding in the capital, the country's president says. 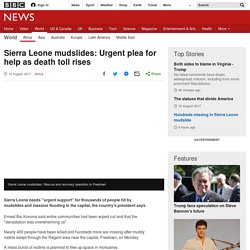 Ernest Bai Koroma said entire communities had been wiped out and that the "devastation was overwhelming us". Nearly 400 people have been killed and hundreds more are missing after muddy rubble swept through the Regent area near the capital, Freetown, on Monday. A mass burial of victims is planned to free up space in mortuaries. *****Informal sector: How the circular economy is working towards doing away with the concept of waste altogether. *****Informal sector: Everything including the kitchen sink - it's amazing what you can buy at the informal @ZaatariCamp shops. #WithRefugees.

These are the most fragile cities in the world – and this is what we’ve learned from them. We are an urban species. 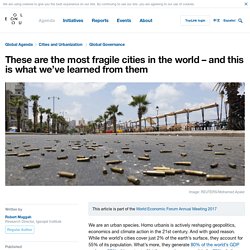 Homo urbanis is actively reshaping geopolitics, economics and climate action in the 21st century. And with good reason. While the world’s cities cover just 2% of the earth’s surface, they account for 55% of its population. What’s more, they generate 80% of the world’s GDP and over 90% of its patents. Yet they are also responsible for 75% of all energy consumption and 80% of CO2 emissions. Ours is an urban century and cities are growing in size and number. China, India and Nigeria alone will account for 40% of all future city growth. Breakneck urbanization is giving rise to radically new types of cities that defy traditional patterns of urban geography. Unequal Scenes.

India will have 7 mega cities by 2030. India is a key topic at the World Economic Forum's Annual Meeting 2017. 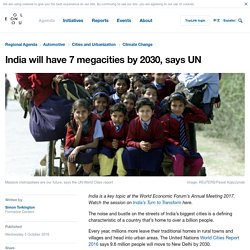 Watch the session on India’s Turn to Transform here. The noise and bustle on the streets of India’s biggest cities is a defining characteristic of a country that’s home to over a billion people. Every year, millions more leave their traditional homes in rural towns and villages and head into urban areas. The United Nations World Cities Report 2016 says 9.6 million people will move to New Delhi by 2030. To qualify as a megacity under the UN definition, an urban area must have a population of 10 million people. 1. Other urban areas in India are growing rapidly as people look to cities for jobs and financial security, as well as the chance of a better education for their children. 1. 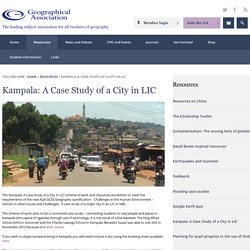 The scheme of work aims to be a connected case study – connecting students to real people and places in Kampala (the capital of Uganda) through use of technology. it is the result of a link between The King Alfred School (KAS) in Somerset and the Charles Lwanga School in Kampala. Benedict Ssaazi was able to visit KAS in November 2015 because of a GAIIF award. If you wish to skype someone living in Kampala you will need to book a slot using the booking sheet available here.