Аn image of a 1950's British dream holiday… Tourists per capita in European countries.by... How the FT does royal weddings.... nice work @federicacocco. Until 1857, all British passports were signed by the Foreign Secretary. UK attracting record number of tourists. *****Tourists (measured in visitor nights) across #EU. Alpine region very popular. Source. *****1963: Meeting Point looked at holidays. BBC Archive is of a mind to wash Mr Wilton's mouth out with soap! Plus, that was only three... *****SKIERS: Forget millennial backpackers – globe-trotting baby boomers are transforming travel.

Ready for a holiday? These are the most tourist-friendly places. Read more. How good could an 18 quid package holiday really be? Holiday '71 went in search of some cheap winter sun #onthisday in, erm, 1971. #OTD 1971: Nationwide visited the first smokeless pub in the UK. Smokeless pub?! For goodness sake, what next? Smokeless buses? City tourism stats. From robot jockeys to the world’s busiest international airport, here are some remarkable facts about Dubai, host city of the The Annual Meeting of the Global Future Councils on 13-14 November. 90% of the population is non-Emirati Data from the Government of Dubai suggests that more than 90% of the population in 2015 was from outside the Emirates. 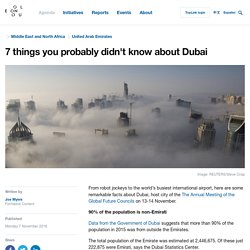 The total population of the Emirate was estimated at 2,446,675. Of these just 222,875 were Emirati, says the Dubai Statistics Center. Image: Roman Logov/Stocksnap.io This year Dubai is set to have more than six visitors for every resident Dubai is set to have over 15 million visitors this year, according to the Mastercard Global Destination Cities Index 2016. In terms of overall visitors though, it’s still got some way to go to beat Bangkok, which tops the Mastercard Index. What will travel look like in 2030? The travel and tourism industry has grown dramatically in the past decades, reaching nearly 1.2 billion international arrivals in 2015, compared to 25 million in 1950. 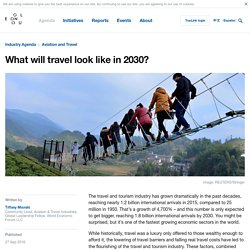 That’s a growth of 4,700% – and this number is only expected to get bigger, reaching 1.8 billion international arrivals by 2030. You might be surprised, but it’s one of the fastest growing economic sectors in the world. While historically, travel was a luxury only offered to those wealthy enough to afford it, the lowering of travel barriers and falling real travel costs have led to the flourishing of the travel and tourism industry. These factors, combined with the growth of disposal income, the growth of the middle class in many growth markets, and changing attitudes of people towards travel, have enabled the surge of international travel. But as we look ahead, who will be travelling in 2030? Image: UNWTO Data Image: Skift 2016 State of Travel Report using WTTC Data. Today’s Seaside Tourism: latest trends and research. Pleasure periphery: Building the path to Key West! Nocookies.

You have cookies turned off To use this website, cookies must be enabled in your browser. To enable cookies, follow the instructions for your browser below. Facebook App: Open links in External Browser There is a specific issue with the Facebook in-app browser intermittently making requests to websites without cookies that had previously been set. This appears to be a defect in the browser which should be addressed soon. Open the settings menu by clicking the hamburger menu in the top rightChoose “App Settings” from the menuTurn on the option “Links Open Externally” (This will use the device’s default browser) Windows Enabling Cookies in Internet Explorer 9 Open the Internet BrowserClick Tools (or “gear” icon at top right hand corner) > Internet Options > Privacy > AdvancedCheck Override automatic cookie handlingFor First-party Cookies and Third-party Cookies click AcceptClick OK and OK Enabling Cookies in Internet Explorer 10, 11.

Most visited museum in each European country. Which countries get the most tourists? International tourist arrivals hit a record 1.1 billion worldwide in 2014, up from 1 billion the year before. 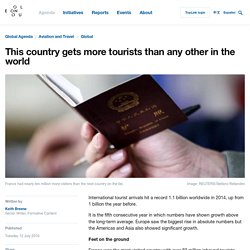 It is the fifth consecutive year in which numbers have shown growth above the long-term average. Europe saw the biggest rise in absolute numbers but the Americas and Asia also showed significant growth. France was the most visited country with over 83 million inbound tourists. That figure was nearly 10 million ahead of the next country on the list, the United States. Image: UNWTO Tourism Highlights, 2015 While France’s visitor numbers remained stable, the United States and Spain, number three on the list, attracted more than four million more tourists than the year before.