Various TNCs. Starbucks. Low taxes for TNCs. Internet giants. Apple. Japan's largest companies by yearly revenue. ($ billion) 1. Toyota: 254 2. Honda: 129 3. Japan Post: 122 4. Nissan: 108 5. Nippon: 105 6. Hitachi: 84 7. Softbank: 82 8. AEON: 75 9. Sony: 70 10. Panasonic: 67. Awesome animation shows the largest tech companies by market cap (stock value multiplied by number of stocks) in world from 1995 until today. Source. Simon Kuestenmacher sur Twitter : "The world of General Motors as of 1935. GM had 110 plants all over the globe at this stage. The bubble size indicates the number of workers. The numbers on the bubbles indicate what was built in each plant (see legend). 'Which is the greater problem: state-owned enterprises or enterprise-owned states?' nice soundbite in my current seminar (Chatham House Rule, sorry) #Infographic shows what companies make up the Unilever brand. Source. Simon Kuestenmacher sur Twitter : "Apple is a gigantic company! It is however tiny compared to a few historic giants like the Dutch East India Company. This chart is a few years old now and you just have to imagine Apple to be at exactly 1 trillion USD. S. 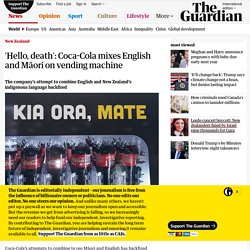 Te reo Māori, the language of New Zealand’s indigenous people has been undergoing a revival and big business has taken note. Google has launched a Māori version of its website, Google Maps is recording more accurate Māori pronunciations, and Disney has released a Māori version of the hit Polynesian film Moana. “There’s an increasing sense that te reo is good for identifying your business as committed to New Zealand,” said Ngahiwi Apanui, chief executive of the Māori Language Commission. But Coca-Cola’s attempts to use the native tongue, which is an official language of New Zealand, has fallen flat. A Coke vending machine emblazoned with the words “Kia ora, Mate”, translates into te reo as “Hello, Death”. “The coca cola company gains self awareness?” Coca-Cola New Zealand was contacted for comment. These are the 8 major forces shaping the future of the global economy #economics… Say what you want about silicon valley but the ability of the US to create a new global business virtually every year is astonishing.…

Apple v Amazon: Battle of the titans. In early September, Amazon's market value briefly went over $1tn (£779bn), just over a month after Apple became the first public company in the world to achieve such a feat. 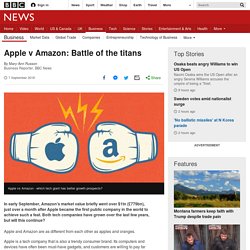 Both tech companies have grown over the last few years, but will this continue? Apple and Amazon are as different from each other as apples and oranges. Apple is a tech company that is also a trendy consumer brand. Its computers and devices have often been must-have gadgets, and customers are willing to pay far more for their products than cheaper alternatives. On the other hand, Amazon is where people go when they want to get a product more cheaply, more easily, or more quickly. Since the iPhone first went on sale in 2007, Apple shares have soared by 1,100% and have jumped almost a third in the past year. As for Amazon, the internet retail giant has seen a steady, yet speedy rise in its share price, with its market value jumping from $600bn to $700bn in just 16 days. Twitter. Apple, on the Verge of a $1 Trillion Valuation, Dominates the World of Public Companies. Apple is easily the most valuable company in the world. 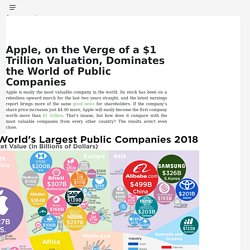 Its stock has been on a relentless upward march for the last two years straight, and the latest earnings report brings more of the same good news for shareholders. If the company’s share price increases just $4.00 more, Apple will easily become the first company worth more than $1 trillion. That’s insane, but how does it compare with the most valuable companies from every other country?

The results aren’t even close. We gathered the data for our visualization from Forbes, which we used to identify the largest company headquartered in each country. Remember, our data only include one company from each country, which is why household names like Walmart and Google are missing. Top 10 Most Valuable Public Companies 1. Www.forbes.

The world’s most valuable brands in 2017.