Public opposition to aerials. College Chums (1907) found a very creative way of depicting a phone conversation. Arthur C Clarke's predictions. David Hay sur Twitter : "#OTD 1901 the Tunbridge Wells municipal telephone service was officially launched. It had over 500 subscribers by the end of August, but like most other local council run systems it quickly folded. Sold to The National Telephone C. First public payphones in Los Angeles, California, 1899… Cyber warfare. This is new. Advert in gents at motorway services. My sceptical antennae are twitching.… #OnThisDay 1956: The inaugural phonecall was made on TAT-1, the first transatlantic telephone cable system, and what a call it was.… Carphone 1959 - UK Mobile Phone History. It was replaced in 1973 (by System 3) , by 1979 the 1959 system was being called SYSTEM 1 Transmitters at Winter Hill and Liverpool, additional receivers at telephone house Manchester Radio Spec Channel Spacing 50 Khz FM deviation +- 15 Khz Land Station 35w, mobile Station upto 25w Using the Car Phone - Receiving a call 1)Turn on the receiver and adjust the squelch control so that you hear the operators calls to radio phone users and not the static. 2)Listen to the calls put out by the radiophone operator, you will hear every incoming call for any radiophone user in the Manchester and Liverpool areas, you only need respond when your number is announced. 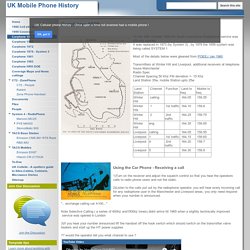 ".. exchange calling car A100... " Check out a cool new use for your old cassette cases #TechHack… Carphone 1959 - UK Mobile Phone History. Mark Ovenden sur Twitter : "Slightly different topic for #ManchesterPride2018 (and #liverpoolpride) now: did you know the region had the UK's first #Mobilephone service? Launched: guess when? 1959! Really! Details here and below. Ordnance Survey sur Twitter : "In terms of #5G mmwave signal, a busy road may cause interference□️As a result, it would likely have to be treated as if it were a permanent obstruction like a building. Find out more here.

Mr Chris sur Twitter : "#OTD 1990 In the first of several changes to London’s telephone dialling codes over the course of a decade, London’s old ‘01’ code is replaced by ‘071’ for inner London exchanges and ‘081’ for those in outer London.… Great news that @goonhillyorg will have upgrade to enable deep space communications. A continuation of Cornwall's role in comms via telegraph, radio & cable. #OTD 1951: Television came to Margate, and how! BBC Archive loves that "four programme" set.… #OTD 1974: Teenagers never change - even in 1974 you couldn't get them away from their phones… 7 March 1876. Alexander Graham Bell received a patent (US No.174465) for his telephone. Here's the prototype drawing…

The British science-fiction film High Treason (1929) envisioned people using video phones in the 1940s… News today: we’ve signed an Accord with the Church of England to get more signal to rural areas. Combining the best of the old & the best of the new... #Infographic shows that landline phones are a dying breed. When was the last year you lived in a house with a landline? I had landline phone… Some further (1972) Ladybird guidance on how to use the telephone. You’re very welcome. Broadband over 'wet string' tested for fun. Image copyright Andrews and Arnold Engineers at a small British internet service provider have successfully made a broadband connection work over 2m (6ft 7in) of wet string. 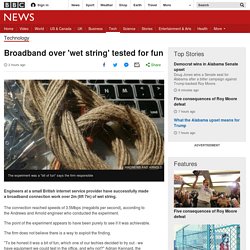 The connection reached speeds of 3.5Mbps (megabits per second), according to the Andrews and Arnold engineer who conducted the experiment. The point of the experiment appears to have been purely to see if it was achievable. The firm does not believe there is a way to exploit the finding. "To be honest it was a bit of fun, which one of our techies decided to try out - we have equipment we could test in the office, and why not? " "There is no commercial potential that we are aware of. " "What it does show, though, is how adaptive ADSL really is. High tech radio equipped cruiser, Columbus, Ohio, 1932. A few years later the answer appears to be “yes”. #OnThisDay 1976: Blue Peter showed off a phone with no cable that you could even take outside. It'll never catch on.

*****1957: In Nation to Nation, Richard Dimbleby recalled the first ever live television broadcast from mainland Europe to Britain, in 1950. The modern world in old Ladybird books. The "videophone" (1972) which "enables the speaker to actually see the person he or she is talking… #OnThisDay 1948: Exciting times for outside broadcast fans as the news unveiled a new television mast! #OTD 1959 The first trunk dialling system from a public call-box is launched during a ceremonial phone call from Bristol to London. In 1902 a group of ranchers in Montana connected the barbed wire across ranches to form a free telephone network. Some still exist today. And you may find yourself behind the wheel of a large British Telecom mobile. *****How cell phones have changed over the past 40 years. #OTD 1959: Norwich became the first place in the UK to get a new six-digit postcode. Jealous, Ipswich?

#OTD 1959: Norwich became the first place in the UK to get a new six-digit postcode. Jealous, Ipswich? 1925: Daventry Transmitter opened, allowing UK-wide radio access. Read more, on the History of the BBC site. The smartphone is going to die - and these tech companies are leading the race to kill it. Top 10 #telcom companies in the world! @howmuch_net (#mobilephone #mobile #socialmedia #iot #iiot #digital) *****1956: Cricket fans seeking the latest score in the ashes made nearly half a million calls to a new special telephone service. Atari Video Computer System, 1978. *****Cross-section of undersea power cables (connectivity) Bell Telephone Acoustics Lab, 1947. *****Rare Autochrome: A young woman mails a letter in Oxford. 1928. Photo: Clifton R. Adams Via @mashable. Mobile #internet speed across the globe #Singapore wins #Hungary surprises #USA and #Germany disappoint source. *****1963: Looking at Television showed how BBC news was made (ft Michael Aspel, Peter Woods), back in the days before we became just a mouthpiece for the left/right...

#OTD 1984: Laser beams offered the means for perfectly private communication, providing a paper pigeon didn't get in the way, of course. #OnThisDay in 1934 the first British rocket mail was fired on the Sussex Downs, carrying thousands of letters. The experiment failed... *****1971: In the seventies, you hadn't really made it until you could receive faxes and order helicopters from your car (incl Dartford College of Education) Longest sub-sea electricity cable in North America now links Newfoundland and Labrador and Nova Scotia. Every day was a busy day for #Radio & #Telephone workers at the General #PostOffice in 1939. #WorldTelecommunicationsDay. *****Air Mail early days: Let's travel back in time to International Air Post Exhibition in London where #GPO was exhibiting in 1934. Who's behind the counter?

Female Indian telephone switchboard operator, Helen of Many Glacier Hotel, June 1925. *****Mapping 5G: How to plan for high frequency spectrum. The future high frequency mmW bands that promise to deliver massive data throughput for 5G, especially in urban environments, are extremely difficult to manage, as they are subject to interference from walls, buildings, people and even the weather. 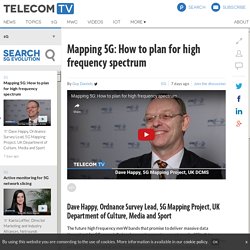 Key to making all this work is network planning, with a degree of precision never yet seen in the industry. In other words, we need maps, and damn fine ones at that. The UK government's Department of Culture, Media & Sport (DCMS) has commissioned a consortium of organisations including the world-renowned mapping experts Ordnance Survey to develop a brand new planning and mapping tool that will be instrumental for the national rollout of 5G. They are building a “digital twin” of the real world, which will be used to determine the prime locations to place the radio antennae access points. #Onthisday 1927: The BBC first broadcast the Oxford vs Cambridge Boat Race. Pictured are audio engineers preparing for the 1930 contest.

#DidYouKnow in 1909-10 there were around 14,000 #BoyMessengers delivering #telegrams. Many of them started their career at the age of 14. The Telephone Wires of Manhattan, 1887. A warning from one of the internet's founding fathers. Read more. #OTD 1984: Tomorrow's World tried a totally terrific tech trend - typing text via touch telephone.

Thinking about it, all my communications are in the hands of five companies. @Microsoft @Facebook @Google @Twitter @Telstra. #OTD 1950: To celebrate 50 years of marine radio, Newsreel visited an exhibition on the progress of marine wireless at the Baltic Exchange. "5G’ is everywhere and yet nowhere…" Andy Revel's Review of MWC17 on @LinkedIn. Interesting and engaging video introducing #circulareconomy A great teaching aid @FieldStudiesC @amackay14. #Onthisday 1965: Here's one for fans of retro grumbling, as people moan about the telephone service. 25 years of mobile phone revolution #CES2017 □ A portable TV prototype created in 1967. Global Internet Usage Based on Time of Day. Moving data across the ocean.

A Native American sends smoke signals in Montana, June 1909. Exploring the world of Connectography. Twitter: predicted in the Soviet Union? Excerpt from an article on the future of media, 1957 issue of Soviet 'Young Technician' magazine. Is the party over for free wifi in cafes? Today in Ladybird 16 Sep 1968 the Post Office introduces 2-tier postal system: 1st & 2nd class stamps.