Twitter. Resource. Twitter. Twitter. Before and after illegal deforestation near Uraricoera river located at Yanomami indigenous land. Note dates: 2016 and 2019. #Amazonrainforest. *****The Amazon is more than just #Brazil. Conservation needs to extend beyond borders. #ESRI #ArcGISPro was a great help in making this GIF showing protected areas in the Amazon Basin over time. The world's forest area is decreasing, but the rate of loss has slowed. More than half of theforests are in only 5 countries See which @UNEP. *****Video: GCSE Geography AQA 9-1. Tropical Rainforests. Impacts of Deforestation. Year 7s whiteboard for today on the values and threats of the tropical rainforest @MEACentral □❌ #workhard. Year 6 Fireflies sur Twitter : "Y6 have created some stunning rainforests in a bottle (inspiration from @MissStanleyYr6), linking to our work on The Explorer by Katherine Rundell @leighcentralps @MissMcDonaldLCP @MrHoughtonLCP #biomesinabottle #theamazon.

Neil Kaye sur Twitter : "I posted a real time speed of Amazon deforestation back in July. I am having to post a new animation as the rate of deforestation has increased by ~30% in the last year It was going at about 14 trees a second it is now about 18 ht. What if we turned back time? #EarthFromSpace in reverse @BBCEarth @IPBES @UNEnvironment #Forests #Deforestation… Steven Bernard sur Twitter : "Deforestation is reducing the land's ability to absorb carbon. Read @lesliehook's article on the landmark IPCC report on land. Also a huge shout out to @jburnmurdoch for his silky R skills #ddj #datavi. Isolated Tribes and Forests Threatened by Peru's New Amazon Road.

A new road could soon slice through a large portion of the otherwise impenetrable rainforests blanketing Peru’s eastern border. 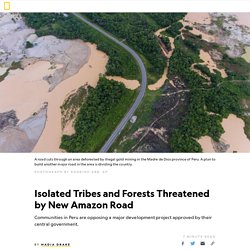 Long a contentious proposition, the road was publicly declared “a national priority” and “in the national interest” by the country’s congress in January. Perhaps ironically, the measure passed almost immediately after Pope Francis visited the Peruvian Amazon and spoke strongly against the dangers of development, telling indigenous leaders that they have "never been so threatened in their territories as they are now.” Now, environmental and local activists are marshaling support to defeat the proposed project before any trees are cleared or pavement laid. Opponents worry the road will bring unregulated development to protected areas, threaten the lives of indigenous groups living in voluntary isolation, trample the rights of native communities, and invite drug and timber traffickers to the area.

Purús Road For now, though, Purús is an isolated province. *****Oil palm plantations in the rainforest @edenproject… The elite soldiers protecting the Amazon rainforest. French Guiana, a small French overseas territory on the north-eastern coast of South America, is one of the most forested nations on the planet, but its precious ecosystem is under threat from illegal gold mining. 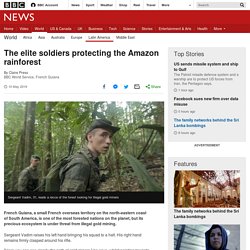 Sergeant Vadim raises his left hand bringing his squad to a halt. His right hand remains firmly clasped around his rifle. "Here you can see clearly the path of gold miners," he says, whilst pointing towards a faint track covered in leaves. "They were here three or four days ago carrying heavy goods. " Sgt Vadim is part of the French Foreign Legion - an elite infantry unit of the French army made up of mostly international recruits tasked with patrolling the dense rainforest.

After further surveying the jungle, Sgt Vadim gives a short sharp whistle. Manoeuvring in a pincer movement, the two units hope to flush out anyone attempting to plunder the forest for its riches. "But here in French Guiana we have a unique treasure, the jungle. Image copyright Getty Images. Mark Walters sur Twitter : "Pretty horrifying how much soil is still being washed off the deforested uplands of Madagascar into the rivers and ultimately the sea. 90% of the tropical forest has been removed, more than 40% since the 1950's. Sentinel 2B sat.

*****Do you think saving the rainforest is a lost cause? Evidence shows that the best way to protect the planet is to protect tribal territories. #EarthDay #EarthDay2019 #ForTribesForNature… Amazon standoff. *****The Goodies (esp Bill Oddie) on rainforest destruction 1975: The Goodies cycled onto Blue Peter to talk gibbons - both the funky and not-funky kind.… Iceland’s Banned TV Christmas Advert... Say hello to Rang-tan. #NoPalmOilChristmas. Molly Scott Cato MEP sur Twitter : "Iceland's Christmas TV about rainforest destruction banned for being too political This is a disgrace. How can protecting life on Earth be ‘too political’? More likely it challenges vested interests that are too powerfu. Survival sur Twitter : "BREAKING NEWS: exclusive footage and images received by Survival International show members of an Amazon tribe have seized illegal loggers and burned their truck to protect an uncontacted tribe in the most threatened region of the. 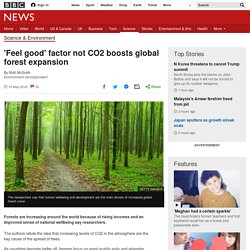 Found this in section 5.2. *****Aerial image animation: This patch of forest in the Amazon had just one road in 1984 and over the next 30 years the area almost completely converted to farmland. #environment #deforestation… Impacts of deforestation on indigenous tribes. Superb piece of work from Mathilda in G8! #geographyteacher…