Energy Production in Canada. Pan and zoom around the map to locate the three oceans surrounding Canada, the five great lakes, some major rivers, and other large bodies of water. 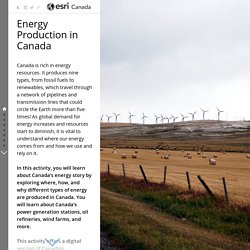 Use the search bar to locate your school, town, or city. Note that no matter where you are in Canada, there is water nearby. Canada has 20% of the world’s fresh water resources. Water also plays an important role in the production and transmission of energy in Canada. Q: Discuss the role that fresh water plays in Canada. *****(6) Canada's Tar Sands: The most destructive project on Earth? - Truthloader. *****(6) Canada's tar sands - a sustainable future? Stephen Leahy┃Live interview.

One of the world’s leading climate scientists has launched a scathing attack on the government’s fracking programme, accusing ministers of aping Donald Trump and ignoring scientific evidence. 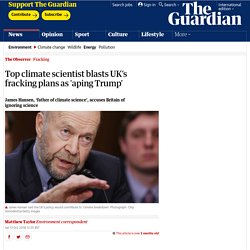 James Hansen, who is known as the father of climate science, warned that future generations would judge the decision to back a UK fracking industry harshly. “So the UK joins Trump, ignores science… full throttle ahead with the worst fossil fuels,” Hansen told the Observer. Paul Dawson on Climate Change sur Twitter : "“The science is crystal clear, we need to phase out fossil fuels starting with the most damaging, the ‘unconventional’ fossil fuels such as tar sands and ‘fracking’.” #climatechange #science #ActOnClimate https. 'Extreme' fossil fuel investments have surged under Donald Trump, report reveals. Bank holdings in “extreme” fossil fuels skyrocketed globally to $115bn during Donald Trump’s first year as US president, with holdings in tar sands oil more than doubling, a new report has found. 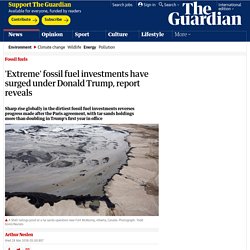 A sharp flight from fossil fuels investments after the Paris agreement was reversed last year with a return to energy sources dubbed “extreme” because of their contribution to global emissions. This included an 11% hike in funding for carbon-heavy tar sands, as well as Arctic and ultra-deepwater oil and coal.