Prof. Katharine Hayhoe sur Twitter : "People worry about how much land we'd need to supply the US with clean energy. Well, @elonmusk and I have independently calculated it and we both come up with something roughly comparable to the area we currently use. Time to stop #fossilfuels and rely on renewable energies. There is no plan B. #climatechange #GreenNewDeal #MondayMotivation #XR #FFF #WWF #environment #SchoolStrike4Climate #mondaythoughts… *****Solar, wind, and batteries are about to enter their third, most disruptive phase yet. There's reason to believe their growth will accelerate, not slow. & that we'll phase out fossil fuel electricity at an incredible pace. A threi.

Ken Caldeira sur Twitter : "Increased deployment of renewables has not kept up with coal, oil and gas, so CO2 emissions per unit energy is worse than it was in 2000. In contrast, efficiency improvements have made a big difference over that time period. ht. Britain's renewables capacity has surpassed fossil fuels #energy… ScottishPower sur Twitter : "We have become the first integrated energy company in the UK to shift completely from fossil fuel generation to wind power, after completing the sale of our traditional generation business to Drax #BetterFutureQuicker #Utility.

*****Electric plane takes to the skies as Norway bids to combat climate change. Learn more about the global energy transition and the countries that are best prepared for it, with the map of the week. Renewables will be equal or cheaper than fossil fuels by 2020, according to #research #energy. The world’s first 'negative emissions' plant has begun operation #climatechange #environment. European Utilities Commit To 100% Carbon-Neutral Electricity “Well Before” 2050 … Because It’s Cheaper #Eurelectric… The All-Electric House: Back to the Future. By Rick Reynolds It’s been 112 years since the first all-electric bungalow style house at 1155 Avon Road in Schenectady, NY, made its debut. 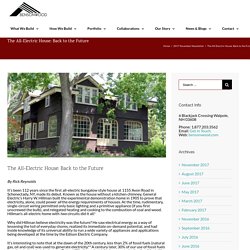 Known as the house without a kitchen chimney, General Electric’s Harry W. Hillman built the experimental demonstration home in 1905 to prove that electricity, alone, could power all the energy requirements of houses. At the time, rudimentary, single-circuit wiring permitted only basic lighting and a primitive appliance (if you first unscrewed the bulb), and relegated heating and cooking to the combustion of coal and wood. Hillman’s all-electric home with two circuits did it all Why did Hillman believe electricity was the future? It’s interesting to note that at the dawn of the 20th century, less than 2% of fossil fuels (natural gas, oil and coal) was used to generate electricity.** A century later, 30% of our use of fossil fuels was devoted to electrical power. *****These 3 maps show what's powering the world. There are many types of maps out there, but one of the most telling ones is a simple satellite image of the Earth at night. 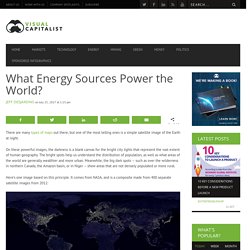 On these powerful images, the darkness is a blank canvas for the bright city lights that represent the vast extent of human geography. The bright spots help us understand the distribution of population, as well as what areas of the world are generally wealthier and more urban. Meanwhile, the big dark spots – such as over the wilderness in northern Canada, the Amazon basin, or in Niger – show areas that are not densely populated or more rural. Here’s one image based on this principle. It comes from NASA, and is a composite made from 400 separate satellite images from 2012: *****Share of renewables in #energy mix of European countries. Is there any ranking not dominated by #Sweden? :) Source. Hydro remains main source of renewable electricity within OECD- at over half of all renewable electricity generation. *****#Map shows average household carbon footprint across #Europe. I was surprised just how high the brits are.

France is now leading the way in the battle against climate change. It is not among the world’s biggest producers of oil and gas, nor the biggest consumers, but France is hoping to become an environmental pioneer with its decision not to issue any more oil and gas exploration licences. 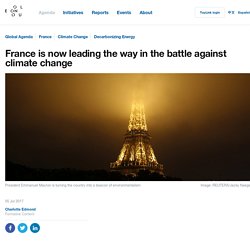 The government, under newly elected President Emmanuel Macron, has vowed to take the step as part of a transition towards more environment-friendly energy sources. Nicolas Hulot, an activist and "environmental transition" minister under the new government, says that the country is set to introduce new legislation in the autumn that will prevent further licences being granted for oil and gas exploitation in France and its overseas territories. France leans heavily on nuclear for its energy sources, and neither it nor its overseas territories are major oil and gas producers. Total, its largest oil and gas company - in fact its largest company altogether - doesn’t operate any fields in its home territory. Image: REUTERS/Pascal Rossignol Macron’s environmental hit list is long. Not the headline, or article, you might expect to see in the Sunday Telegraph.