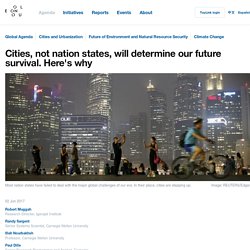 Some of them are outright belligerent, and threatening catastrophic war. While some nation states are exhibiting neo-imperial tendencies, most are waning in power and influence. The 369 year experiment in nation-building is coming unstuck with most nation states failing to deal with the major global challenges of our era, including climate change, forced migration, terrorism, pandemics and more. Cities, not nation states, will determine our future survival. Why? The good news is that many cities are stepping up at precisely the moment when nation states are falling behind. *****Subnational governance: Covenant of Mayors World’s biggest urban climate & energy initiative HT @DrDCWahl. *****Subnational governance: Covenant of Mayors. *****What makes a good city? Criteria / good governance / subnational (theconversation) This is one of a series of articles to coincide with the 2017 Ecocity World Summit, which begins today in Melbourne. 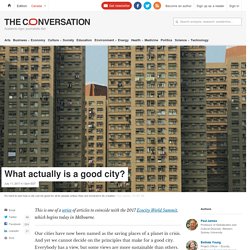 Our cities have now been named as the saving places of a planet in crisis. And yet we cannot decide on the principles that make for a good city. Everybody has a view, but some views are more sustainable than others. What we desperately need is a big and general public dialogue about the principles that make for a good city. This is the basis of our project, Principles for Better Cities, led by the City of Berlin. Broader vision is needed We need to get beyond the current tendency to become fixated on spruiking different high-level concepts. 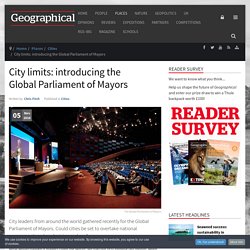 Could cities be set to overtake national governments as key decision makers? What would happen if mayors ruled the world? We had our first glimpse last month, when mayors from over 60 cities around the world convened in The Hague, Netherlands, for the inaugural Global Parliament of Mayors (GPM), to discuss how our urban hubs can work together to solve the world’s challenges. If Mayors Ruled the World: Dysfunctional Nations, Rising Cities, the inspiration for the GPM, is a 2013 book by political theorist Benjamin Barber.

He argues that the days of nation-states being able to significantly influence the world are numbered, and that networks between cities have taken over as the most effective way to create effective global change. *****City region / Subnational governance: Did you know if Lagos were a country, it would have one of the largest economies in Africa? #CNNLagosWeek #Lagosat50. *****Subnational governance: Over the last century the share of tax revenue in #USA from local government declined. Loss of local power? *****Subnational governance: Much to commend this. Let the fools & backsliders go so serious ppl can focus.Then welcome them back when they find senses. EU Brexit stance.

*****Subnational gov + paradiplomacy - Forget the nation-state: cities will transform the way we conduct foreign affairs. In 1814, Ivan Krylov, one of Russia’s best known authors, wrote a fable describing a man who goes to a museum and scrutinizes all sorts of tiny things, but fails to notice a bulky elephant. 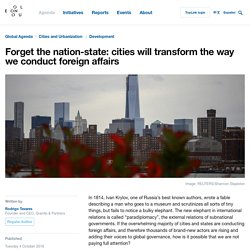 The new elephant in international relations is called “paradiplomacy”, the external relations of subnational governments. If the overwhelming majority of cities and states are conducting foreign affairs, and therefore thousands of brand-new actors are rising and adding their voices to global governance, how is it possible that we are not paying full attention? Aware of their economic potential and faced with gridlock in national capitals, mayors and governors have gone a long way towards exercising political and economic power globally. The international activism of cities and states is rapidly growing across the world, discreetly transforming diplomatic practices and the delivery of public services. Cities are economic and political powerhouses. *****Subnational governance: Sydney, Vancouver mayors vow to fight climate change despite...

"Denial doesn't stop climate change accelerating so it's even more important for cities to do their bit" MEXICO CITY, Nov 30 (Reuters) - Cities around the world can combat climate change without national government support, the mayors of Sydney and Vancouver said on Wednesday, amid fears that a Donald Trump U.S. presidency could undermine efforts to limit global warming. 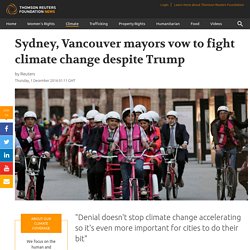 The two were in Mexico City for the C40 Mayors' Summit, where nearly 50 mayors and deputies from around the globe will discuss environmental issues such as air pollution. Since his election victory, President-elect Trump has said he was keeping an "open mind" on whether to pull out of the landmark 2015 Paris Agreement to tackle climate change. Trump had previously called man-made global warming a hoax perpetrated by the Chinese.

*****Subnational gov: Hundreds of US mayors endorse switch to 100% renewable energy by 2035. *****Subnational governance (mashable) California Governor Jerry Brown is not about to take a back seat to President Donald Trump when it comes to summit meetings, or for that matter, anything else. 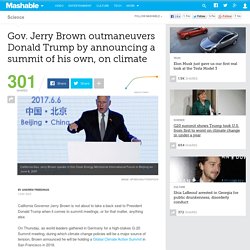 On Thursday, as world leaders gathered in Germany for a high-stakes G-20 Summit meeting, during which climate change policies will be a major source of tension, Brown announced he will be holding a Global Climate Action Summit in San Francisco in 2018. Since President Trump declared that the U.S. intends to withdraw from the Paris Climate Agreement, Brown has been using his status as the governor of the most populous state — and world's sixth-largest economy — to negotiate directly with foreign governments, including China and Canada, on climate policies. "President Trump is trying to get out of the Paris Agreement, but he doesn't speak for the rest of America. Coalition members aim to, among other actions, reduce their greenhouse gas emissions to 80 to 95 percent below 1990 levels.