Mass trespass. Conservation controversies. UNESCO's new heritage sites – in pictures. Fix the Fells. Will Bath dare to become the first UK city with a ‘tourist tax’? The “tourist tax” is one of those ideas that everyone agrees is great – and then quietly drops. 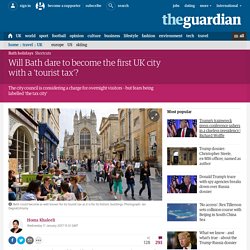 But now the historic city of Bath might take the plunge and become the first place in the UK to implement one. With the city’s council facing £37m of cuts in the next five years, it is considering an extra charge for overnight visitors to Bath, a local councillor has told the BBC. Outside the UK, such tourist taxes flourish – from the Balearic Islands to Rome, Amsterdam and Paris. But while cities such as Edinburgh, Birmingham, Brighton and London – as well as Cornwall – have all toyed with the idea of cashing in on the tourists who flock to them, none has seen it through.

This is despite the fact that a 2007 commission into local government funding recommended a tourist tax, while a 2012 commission set up by Boris Johnson when he was London Mayor said there was a “powerful argument for a levy”. One reason local authorities are reluctant is that no one wants to be the first. Extinct animals: Vintage tourist posters. You can still visit Costa Rica, but you'll never find a golden toad there. 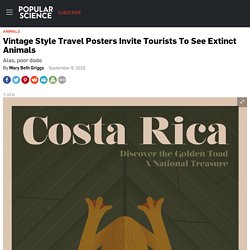 At least not any more. That's because unfortunately, travel does not include time travel. In a series called Unknown Tourism from Expedia UK, you can see vintage-style travel posters that depict things that you can't see if you jet off to lovely locales around the globe. "It all began when we started thinking about the things you can't see anymore when you go traveling," Matt Lindley, a spokesperson for the project told Popular Science. "Information about a country's extinct wildlife can't always be found in the guidebook--yet it still forms part of a country's cultural heritage and is something you may want to know about when you travel. The vintage-style posters hark back to an earlier time, specifically, the travel posters of the 1930's through 1950's. Many animals today are currently endangered, including the gorilla and some newly identified species of giraffe.

The destruction of a social media 'rock star' Image copyright Laura Lawson Visconti The quest for a perfect photo to share online - many have valiantly embarked on that journey. 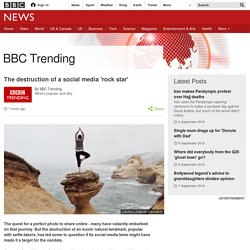 But the destruction of an iconic natural landmark, popular with selfie-takers, has led some to question if its social media fame might have made it a target for the vandals. Oregon's Cape Kiwanda State Natural Area is particularly striking part of the scenic US Pacific Northwest. And teetering over the edge of a cliff facing the Oregon coast, a sandstone rock formation dubbed the "Duckbill" (as some say its profile resembles the beak, or "bill" of a duck), had attracted many an intrepid photographer over the years. Image copyright Lisa Johnson The rock, a narrow column topped by a huge pedestal, had stood on the cliff's edge for hundreds of years. When parks officials found the structure smashed to thousands of pieces, they concluded that it had succumbed to the elements. 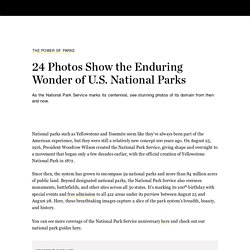 National parks such as Yellowstone and Yosemite seem like they’ve always been part of the American experience, but they were still a relatively new concept 100 years ago. On August 25, 1916, President Woodrow Wilson created the National Park Service, giving shape and oversight to a movement that began only a few decades earlier, with the official creation of Yellowstone National Park in 1872. Since then, the system has grown to encompass 59 national parks and more than 84 million acres of public land. Beyond designated national parks, the National Park Service also oversees monuments, battlefields, and other sites across all 50 states. It’s marking its 100th birthday with special events and free admission to all 412 areas under its purview between August 25 and August 28.