Twitter. High speed #internet for everyone. Thank you @elonmusk. Can't, your bloody satellites are in the way.… Stunning Starlink Mission shot Credit: Official SpaceX Photos… Starlink space display 'set to continue all week' Image copyright EPA/Peter Komka Hungary Out The spectacle of satellites passing over the UK in what looks like a chain of lights should be visible for the rest of the week, space experts say. 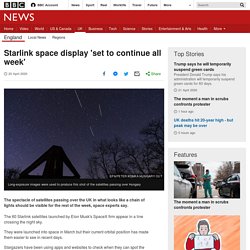 The 60 Starlink satellites launched by Elon Musk's SpaceX firm appear in a line crossing the night sky. They were launched into space in March but their current orbital position has made them easier to see in recent days. Stargazers have been using apps and websites to check when they can spot the display. SpaceX has sent 300 satellites into space so far towards a planned network of 12,000, with the aim of improving global internet coverage. They have been taken up in batches of 60, with the most recent launch in mid-March. Media playback is unsupported on your device The most recent line of satellites has been spotted in Derbyshire, Manchester, London, Leeds and across Europe, with many people sharing their excitement on social media. She said she expected this to continue for at least another five days.

That Starlink Problem Astronomers Were Worried About Is Totally Happening. For the modern astronomer, satellites are just a part of life. 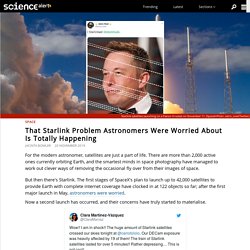 There are more than 2,000 active ones currently orbiting Earth, and the smartest minds in space photography have managed to work out clever ways of removing the occasional fly over from their images of space. But then there's Starlink. The first stages of SpaceX's plan to launch up to 42,000 satellites to provide Earth with complete internet coverage have clocked in at 122 objects so far; after the first major launch in May, astronomers were worried.

Now a second launch has occurred, and their concerns have truly started to materialise. Fancy seeing something really cool? (some saw it last night) ⬇️This is the #Starlink satellite train from the @SpaceX program and will be visible tonight □. □ Look SW to E at around 10pm for 6mins. Plenty of clear skies for it too! □ And here’s some of them - nine long exposure images stacked, and I still missed a lot of them!… Six minute overpass of @SpaceXStarlink satellites on Mar 7, 2020 from 4:27am - 4:33am MST at Tres Piedras, New Mexico, USA… Starlink is a crime against humanity; it robs us of the skies of our ancestors to every corner of the earth. ASAS-SN sur Twitter : "More #Starlink garbage, this time in images taken last night from Chile. (no, we don't point our telescopes at where they would be, we scan the whole sky every night, and space garbage shows up). (images flagged by @ZachWay96) https.

The FCC's Approval of SpaceX's Starlink Mega Constellation May Have Been Unlawful. A battle for the sky is raging, and the heavens are losing. 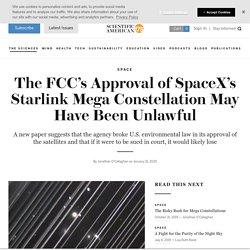 Diana Umpierre sur Twitter : "No words to describe the anger I feel at what I witnessed today. Tonight I saw a long #Starlink satellite train crossed the #Everglades, as bright as the 5th brightest celestial object in the night sky, with my own eyes, abou. SpaceX Starlink mega-constellation: 'Limited time' to fix brightness issue. Media playback is unsupported on your device. 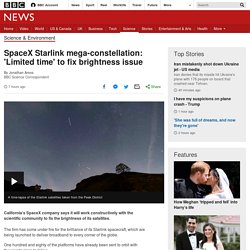 Raul C Lima sur Twitter : "The transmission of these deployments (for mega-constellations) should be seen the same way as one would watch the disposal of junk or the deforestation of an immaculate landscape. The transformation of the night sky is becoming. The Starlink satellites are brighter than 99% of the existing satellites in orbit. #AAS235… "When there are 50,000 satellites in the sky, 'you’ll see the sky crawling,' says Tony Tyson, a @ucdavis astronomer and physicist. 'Every square degree will have something crawling in it.'

*****#Starlink satellites are still quite close to each other, and it is possible to see them as a row of 60 satellites moving together in the sky. The satellites are quite small but can be easily observed with the naked eye. What d. Due to darksky concerns, SpaceX is testing a black 2.0 or Vantablack paint to avoid this.… So sad.. #Starlink will ruin the visibility of the thing that it is named after: stars :( This is in Ireland.. and this just a few of the many thousands being planned. SpaceX sends 60 more Starlink satellites into orbit. Image copyright SPACEX California's SpaceX company has launched another 60 satellites in its Starlink network. 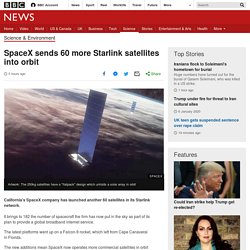 It brings to 182 the number of spacecraft the firm has now put in the sky as part of its plan to provide a global broadband internet service. The latest platforms went up on a Falcon-9 rocket, which left from Cape Canaveral in Florida. The new additions mean SpaceX now operates more commercial satellites in orbit than any other company. Planet Labs, also of California, has the next biggest working constellation at just under 150. SpaceX has permission from regulators to launch up to 12,000 platforms but has talked of an eventual 40,000, depending on how the project develops. Two more batches of 60 could go up before the month is out, as the firm endeavours to start offering some regional broadband links later this year. SpaceX believes the concerns are overstated, however. Whether the scientists will be satisfied remains to be seen. Media playback is unsupported on your device. Patrick Barkham sur Twitter : "Happy New Year everyone. I spent New Year's Eve on the beach, under amazing stars. Looked up at 5.30pm and saw 2 satellites chasing each other and then a line of 12 following the same trajectory. The night sky as a motorway.

Update: now 113 pics with total 7m32s exposure time (most Starlink sats). @IDADarkSky: This evening I could observe #Starlink satellites. A composite of 188s exposure time of the Cassiopeia constellation showing the negativ #lightpollution effect they will have...… This one is a composite of several different photos (hence the star trailing), each of 30s exposure, showing multiple Starlink trails ...… Astronomers issue URGENT warning about Elon Musk's Starlink satellite constellation. Astronomers have issued an urgent warning about Elon Musk's Starlink satellites, claiming that they could eventually outnumber the stars visible in our night sky. 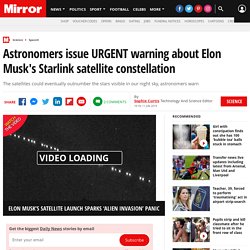 Last month, Elon Musk's company SpaceX launched 60 Starlink communication satellites aboard a single rocket, in the first stage of its mission to provide cheap and reliable internet access worldwide . The Starlink network will eventually consist of a "super-constellation" of close to 12,000 satellites, providing internet coverage across the globe, according to Musk.

Within days of the launch, skywatchers worldwide spotted the satellites flying in formation as they orbited Earth and reflected sunlight from their shiny metal surfaces. Some people, unaware that artificial satellites can be seen moving against the night sky, reported UFO sightings . SpaceX isn't the only organisation planning to launch a low-Earth-orbit constellation to beam internet back to the Earth. These impacts could include: Spacelink, the Sky, and Colonialist Attitudes – Skepchick. Rebecca already posted an excellent video critique of Elon Musk’s Starlink concept, but as Skepchick’s resident astronomer, I thought I’d expand upon it a bit. 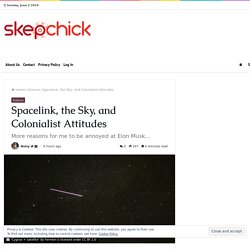 You all might know that I’m a radio astronomer, but I have at least a little bit of experience with visual observing as well. As an astronomy professor at a small college, I also run our tiny observatory, and I have plans to expand it. But will it be worth setting up a small research telescope if the night sky is about to become a lot more crowded?

Today, you can go out and see a satellite just about any night the sky is clear if you know where to look. Many satellites have solar panels that, when the angle is just right, cause them to reflect that light back to Earth, usually during the few hours after sundown and few hours before sun-up. Catherine Q. sur Twitter : "Actually very concerning for astronomers, astrophotographers - current plans are for *12000* of these Starlink satellites, many of which will (almost certainly) be highly visible at night in many locations despite Musk’s “reass. Doug Ellison sur Twitter : "Ok. Starlink's kind of blown up over the past 48 hours. Let's get some things straight. Despite their creator insisting otherwise they WILL be naked eye visible, for at least an hour, more like two, after dark and before dawn.