Here's the bit we didn't see in full before. A bloody rocket, landing itself, on a moving ship in the middle of the bloody ocean! Insane.

Safety approaches. Careers at Space X. A rocket launch from SpaceX putting on a show over downtown Los Angeles, with rocket exhaust gasses and RCS pulses illuminated by the recently set Sun. Full video. Jamie Bernstein sur Twitter : "Great piece by @NoisyAstronomer on why Elon Musk’s plan to launch 12,000 satellites into orbit to provide global internet not only would make most of our telescopes obsolete but also is a form of colonialism. Matt Gray sur Twitter : "These highlights of the @SpaceX Falcon Heavy launch are worth a watch! I’ve even fast forwarded the boring bits for you. 1. Launch. 2. Boosters detach. 3. Main engine detaches. 4. Side boosters land simultaneously side-by-side. 5. #FalconHeavy booster landing from CCAFS. Car alarms and all! #SpaceX #Arabsat6A…

Brian Cox sur Twitter : "A fascinating look at how tricky docking is - also makes me think about the skill of the astronauts who did this in the 1960s and 70s with very little help from software - in particular in lunar orbit after Apollo moon landings !… 2001 has finally arrived :-) That's better!… □ Science Fiction becoming reality. Earth floats gently in zero gravity… Recent fairing recovery test with Mr. Steven. So close!… This you have to see for 2 reasons. One, it is incredible, and 2, the commentary is typically understated American exuberance. Brilliant. SpaceX Saocom 1A mission full launch as seen in Downtown LA in 4k. You can see the pulse of the gas thrusters on @SpaceX's Falcon 9, as the rocket's boost stage guides itself back to Earth last night.…

David Gerdes sur Twitter : "Proof that red sports cars don't look like rocks! The @SpaceX Roadster imaged by @theDESurvey has colors completely unlike Main Belt asteroids. It will stand out to observers millions of years from now as a possibly artificial. Virtual Telescope sur Twitter : "We imaged again Elon Musk's #Tesla #Roadster, which is now VERY faint, but here it is! At the imaging time, it was 40 millions times fainter than the Polaris star! @Tesla @SpaceX @elonmusk @TeslaMotorsClub @planet4589 more. *****Where is Elon's Roadster now? Showing simulated views. We’ve trashed the oceans; now we are turning space into a junkyard for billionaires. David Attenborough’s Blue Planet series raised our awareness of rubbish tips traversing our oceans and choking some of our most beloved marine species. 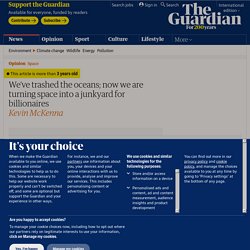 This has led to a global debate about how we manufacture and dispose of plastics. The Scottish government announced that it is to host an international conference in 2019 to discuss action on marine litter. It’s ideal territory for any government seeking to be regarded as edgy and cool on this year’s fashionable cause.

No one could disagree with its aims and purpose and, more importantly, nothing that emerges from it will commit anyone to spending money or risking the growth of emerging industries. Perhaps soon our marine technology will have advanced to the stage where we can actually interpret what whales and dolphins are saying and begin to solicit their views on the subject. You might be tempted to dismiss this as an expensive publicity stunt by a billionaire playboy with too much time on his hands. Mind how you go. JJ Hermes sur Twitter : "Early this morning we measured the brightness changes of a car tumbling in space! Credit to Erik Dennihy (@UNC), we can report that Tesla Roadster (Starman, 2018-017A) is rotating with a period of 4.7589 +/- 0.0060 minutes.… https.

Goodbye, Earth!… Scratching head trying to work out which subject discipline owns this: Art, Engineering, Geography, Physics, Drama, History, Dance .... ?… I'm floating in a most peculiar way #SpaceX @PeterGWeather @dallascampbell… Uninterrupted Footage of the Falcon Heavy Launch and Booster Landing! 2-6-18. New Video (Wear Headphones!): The Incredible Sounds of the Falcon Heavy Launch (BINAURAL AUDIO IMMERSION) - Smarter Every Day 189. Deceleration can be noisy - great video #SpaceX boosters @PeterGWeather @dallascampbell… … It’s not every day you see this! Congrats @SpaceX !!! That was sweet! #FalconHeavy #Starman must be enjoying the view… How amazing is this? Watch @SpaceX nail the landing with the #FalconHeavy boosters! That Tesla will be hard to beat □… The descent and landing of the @SpaceX #Falcon9 stage 1 after Friday's launch of the #CRS13 mission to the @Space_Station. Nice - @SpaceX Irridum 4 launch creating a Christmas star :) #SpaceX.