Spacecraft armour. Let me just clarify for everyone that while cool and informative, these types of visualizations are IN NO WAY representative of the sheer amount of space between earth-orbiting satellites. Interesting thread coming out from @esaoperations - “...The [collision avoidance] manoeuvre took place about 1/2 an orbit before the potential collision...” #KesslerSyndrome. Not too difficult to read between the lines of this thread. Can you believe 12,359 of the 16,634 satellites are space junk? Cool @ArcGISJSAPI app made by the Esri Prototype Lab -> #esrijs #javascript #geodev… Space harpoon skewers 'orbital debris' Media playback is unsupported on your device The British-led mission to test techniques to clear up space junk has demonstrated a harpoon in orbit. 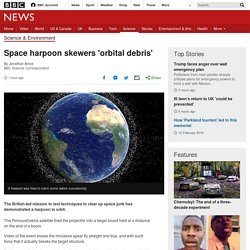 The RemoveDebris satellite fired the projectile into a target board held at a distance on the end of a boom. Video of the event shows the miniature spear fly straight and true, and with such force that it actually breaks the target structure. But, importantly, the harpoon's barbs deploy and hold on to the board, preventing it from floating away. Prof Guglielmo Aglietti, from the University of Surrey, is the principal investigator on the mission. "You see the harpoon hit the target in the centre, as expected, and get embedded.

The £13m RemoveDebris project was launched last year to showcase ways of tackling the growing litter problem in orbit. Image copyright AIRBUS More than 60 years of space activity have left something like 8,000 tonnes of material wandering aimlessly around the planet. It has also run the rule over a novel tracking system. This is a picture of 1 of 96 bags of Apollo astronaut poo/urine/vomit that are still up there! China's #ChangE4 landed successfully on the Moon - but as well as probes, golf balls and bags of vomit - what other manmade items are there? Net successfully snares space debris #RemoveDEBRIS @SurreySat @SurreyResearch @ArianeGroup @AirbusintheUK… *****Kessler syndrome: Map of all known space debris [3543x2308] : MapPorn. Nicolas CHAMUSSY sur Twitter : "RemoveDEBRIS is on its way to @Space_Station for space debris removal demonstrations. Space debris is a major threat to space assets and @AirbusSpace and @SurreySat are proud to be partners in this mission. 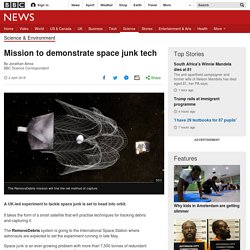 It takes the form of a small satellite that will practise techniques for tracking debris and capturing it. The RemoveDebris system is going to the International Space Station where astronauts are expected to set the experiment running in late May. Space junk is an ever-growing problem with more than 7,500 tonnes of redundant hardware now thought to be circling the Earth. Ranging from old rocket bodies and defunct spacecraft through to screws and even flecks of paint - this material poses a collision hazard to operational missions. RemoveDebris will showcase technologies that could be used to clean up some of this techno-garbage. The 100kg-class demonstrator is due to ride to orbit on Monday aboard a SpaceX Falcon 9 rocket.

Media playback is unsupported on your device Image copyright SSTL/Max Alexander RemoveDebris carries its own "junk" - two small cubesats that it will eject and then track. To boldly clean...... BBC News : Space junk mission prepares for launch. Why the new space race must focus on sustainability. There are roughly 1,500 satellites orbiting Earth right now, providing a wide array of data and services that are critical to human societies. 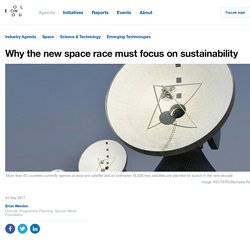 They contribute information that’s vital for the environment, education, food security, public health, water resource management, human rights, disaster relief and nuclear security. The Global Position System, for example, is estimated to have benefited the US economy by more than $55 billion in 2013 alone. Space-derived services not only improve the efficiency and effectiveness of many terrestrial activities but also provide much of the information and understanding needed to prevent and mitigate a variety of risks. At the same time, the field of space is experiencing rapid changes. There are a growing number of governments, companies, and other entities starting to get involved in space, and some are exploring new types of activities and capabilities that could in the future bring massive and new benefits. Image: Reuters Share Written by. Why the new space race must focus on sustainability.