Meanwhile 20mm of rain over south #herefordshire has caused this. #soilpatrol has been out today and this farmer will be receiving a visit. Twitter. Why soil is one of the most amazing things on Earth - BBC Ideas. Growth of fungal mycelium. If you teased apart the mycelium found in a teaspoon of soil and laid it end to end, it could stretch between 100m to 10km. Soil would be sluiced off by rain were it not for the dense mesh of fungal tissue that holds it together. Soils of Africa (WRB classification) now in GIF form! Is #geoGIF / #geograGIF a thing? We treat our soil like dirt This cannot be sustainable #farming Permanent pasture up and down the road had no such runoff @theriverstrust #StormDennis…

Simon Evans sur Twitter : "When the 'white' water is brown you know their is more than 100mg/l of #soil in the water column! There are many bare sloping #maize fields in this catchment, that despite harvest 2 months ago still have no mitigation. This is # Tim Wallace sur Twitter : "While pulling imagery for some of these Amazon warehouses we found a few oddities. Like, er, is bulldozing soil into a nearby lake par for the course with large-scale construction? □‍♂️□‍♀️□□‍♂️□‍♀️ http. Joe O'Brien sur Twitter : "A farmer just sent me this from near Warren in NSW. It’s from earlier in the season but she says they get dust storms every couple of days now and it’s drier. “People don’t realise what it’s like out here.” #Drought…

Ben Goldsmith sur Twitter : "Every single civilisational collapse that has ever occurred came about because they abused and ruined their soil. Easter Island, Iceland, the Mayans. It’s coming to us next unless we change how we farm. And we’ll deserve it.… Dr Ben King □UN-accredited Climate Change Teacher sur Twitter : "Some farmers are still leaving their fields uncovered over winter, despite decades of experiencing serious soil erosion. In combination with the relief of our #Devon farmland, our rivers are.

*****Soil erosion: Every year run off from urban areas: agriculture in Mississippi catchment result in a hypoxic or dead zone in the Gulf of Mexico where little marine life can survive. This year, due to massive rainfall it’s forecast to be around. 'Despite all our accomplishments, we owe our existence to a six inch layer of topsoil and the fact it rains' - Possibly the best soil quote! *****A rare sight captured last summer during my Horizons mission: Great Britain and #Ireland without clouds. / Ein seltener Anblick: Großbritannien und Irland ohne Wolken! Aufgenommen während meiner #Horizons Mission. #archive… River Frome at Bromyard today. Vast amounts of one of #herefordshire ‘s greatest resources disappearing to the sea Still plenty to do #soilpatrol…

Forest soil time lapse Bioturbation is the technical term for mixing the leaf litter with the soil, which was new to me, which helps the detritivors (or 'decomposers' in the CCEA A Level Specification) do their thing. This, remember, is the entire basis of our subsistence. Lose the soil and human life goes with it. Twitter. Love this sentiment at the Lost Gardens of Heligan… EU EnvironmentAgency sur Twitter : "#Soil is the second largest #carbonsink, after the oceans. Restoring key ecosystems on land, and a sustainable use of the land in urban and rural areas, can help us mitigate and adapt to #ClimateChange. #WorldSoilDay ht.

*****Soil is the very stuff of life (ecosystem services). How many harvests are there left? Powerful and pretty scary short film. #soil #WilderFuture… 'Send in the drones' to protect soil. Image copyright PA Squadrons of drones should be deployed to locate and penalise farmers who let soil run off their fields, a report will say. 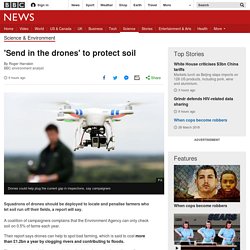 A coalition of campaigners complains that the Environment Agency can only check soil on 0.5% of farms each year. Their report says drones can help to spot bad farming, which is said to cost more than £1.2bn a year by clogging rivers and contributing to floods. The government said it was considering the ideas for combating soil run-off The proposals come from the Angling Trust, WWF and the Rivers Trust - with support from the RSPB. The groups say poor farming is the chief cause of the UK's decline in the health of rivers, and a major contributor to flooding. @aphs_geography Came across this wonderful chocolate coloured snowdrift in my village today,just had to share! Henry Townshend… Soil erosion in action. These snow drifts were white yesterday, wind picked up overnight, soil blown off adjacent field, snow drifts brown this morning! #colkirk… More of the soil contaminated snowdrifts. @DaveThroupEA @severnrivers…

Exacerbated I suspect by the strong drying winds before the snow arrived… Another of their #snoil images. Almost beautiful - until you remember that soil is the substrate on which all human life depends, and we're losing it at shocking rates… Dave Throup sur Twitter : "#herefordshire high risk field identified with satellite data. Sloping maize stubble adjacent to watercourse. Little buffering resulting in runoff to stream. Full regulatory visit will now be carried on farm. #soilpatrol… https:

Worth remembering...… Over 20 #LivingAtlas ready-to-use soil layers available in @ArcGISPro! The Ladybird book on climate change advent DAY 20: Soils – especially those with a high proportion of organic matter – are important natural… Natural Environment Research Council. Latest version released 01 February 2017 You can now: join us in using the new myLandcover to help us validate the CEH's land cover map of the UK view an interactive tour that takes you step-by-step through how to explore the soil environment where you live share the maps you create showing any of our 100+ soil layers for your area of interest add any additional map layers via WMS to add further context to the 100+ soil layers provided What does the viewer do? 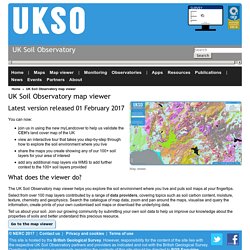 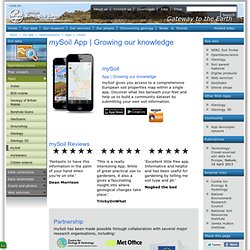 Discover what lies beneath your feet and help us to build a community dataset by submitting your own soil information. mySoil Reviews ‘Fantastic to have this information in the palm of your hand when you're on site.’ Dean Morrison ‘This is a really interesting App. TrickyOnWhat ‘Excellent little free app. Nogbad the bad Partnership mySoil has been made possible through collaboration with several major research organisations, including: European coverage Discover the latest soil mapping data from across Europe. More detailed data is available for UK. United Kingdom Soil Observatory. The UK Soil Observatory (UKSO) map viewer helps you explore the soil environment around where you live and puts soil maps at your fingertips. 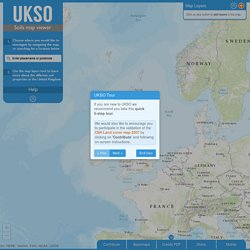 Select from over 100 map layers contributed by a range of data providers covering topics such as soil carbon content, moisture, texture, chemistry and geophysics. Search the catalogue of map data, zoom and pan around the maps, visualise and query the information, create prints of your own customised soil maps, download the underlying data, contribute information about your soil. If you are new to UKSO we recommend you take this quick 5-step tour: