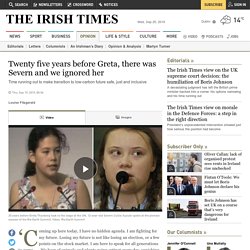 I am fighting for my future. Losing my future is not like losing an election, or a few points on the stock market. I am here to speak for all generations to come . . . We hear of animals and plants going extinct every day, vanishing forever . . . Did you have to worry of these things when you were my age? Reading this you could think it was from any one of the youth climate strikers. She became known as “the girl who silenced the world for five minutes”. We would have had a relatively easy and achievable chance of addressing global warming and the ecological crisis. ‘War-like mobilisation’ Instead, as David Wallace-Wells’s Uninhabitable Earth notes, more carbon dioxide was pumped into the atmosphere in the years since the Rio Summit than in all the years prior to it.

Emissions instead are increasing. Against this backdrop, the UN Climate Action Summit will take place in New York on September 23rd. Sustainable transition. Where it began: The first Tweet of Swedish climate activist @GretaThunberg was a link to this article: "Top Climate Scientist: Humans Will Go Extinct if We Don’t Fix Climate Change by 2023. When your troll president gets out-trolled Cc: @realDonaldTrump… "The UN climate action summit was an example of progress - dull, grinding, messy, imperfect progress. Geography made easy sur Twitter : "The entire speech made by @GretaThunberg from the UN ... powerful not sure how it fits into lessons yet but I’m working on updating climate change as things are moving fast #geography #geographyteacher.

Laura Tobin sur Twitter : "Today the World focuses on the #climatecrisis □Earth’s never warmed so dramatically. It’s directly linked to mankind & our dramatic rise in Greenhouse gass emissions #climateChange is undeniable -What impacts has it already caus. The Problem With Greta Thunberg’s Climate Activism. Kids her age have not seen much of life. 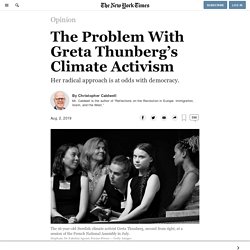 Her worldview might be unrealistic, her priorities out of balance. But in our time, and in her cause, that seems to be a plus. People have had enough of balance and perspective. They want single-minded devotion to the task at hand. This Ms. Alliances between institutional authorities and activists like Ms. It is also hard to say what a real, non-utopian low-carbon politics would look like, once the public got involved in legislating and regulating.

And that is before we even broach the question of what kind of civilization we want, and at what level of technological complexity. Increasingly, climate agitators want action, not distraction. Behind the new boldness of climate activists is the assumption that ordinary Europeans’ good intentions are sincere and their inaction is hypocritical. António Guterres sur Twitter : "Political leaders are not acting quickly enough to win the race against the climate emergency. I trust young people like @GretaThunberg to push my generation, to push their parents, to push societies to save our planet & ou. Watch my interview on @SkyNews yesterday, talking about @ExtinctionR and #ClimateCatastrophe! Just got home after 3 days protesting in London (PhD work awaits unfortunately). Spent most of that time with placard full of graphs explaining to public why I t. Wow... The Times - yes, *The Times* - comes out in favour of #Youth4ClimateJustice in today's editorial:

I think the word that this science school teacher is struggling to find is 'Geography' James Theobald sur Twitter : "By the way, school strikes aren't a new thing. Here's a thread about one that took place in 1972, which gives you an insight into various attitudes from students: some were genuinely politically engaged; some saw it as an opp. Richard Osman sur Twitter : "Huge support, respect and thanks for everyone taking part in #schoolstrike4climate. While my generation just yell at each other in ever decreasing circles, the planet is dying around us. I hope this incredible new generation k. □□ #ClimateStrike Cartoon from @theipaper □ #education #climatechange #climateaction #schoolstrike #youth… Twitter. FOR GOD’S SAKE WON’T SOMEONE THINK OF THE LAWN! □… And if you think young people should have protested at the weekend or during school holidays then you’ve pretty much missed the point of the protests...…

It’s called engaging, taking part, trying to affect positive change for the future. How about we applaud that or are you if the “ seen and not heard” school. I see hope and you see..... nothing.… Thousands of students across the UK walked out of school to demand the government take action against climate change… James Murray sur Twitter : "It has come to my attention that not everyone has the time or inclination to read 5,000 word think pieces on theories of change and why #schoolstrike4climate and what it heralds could be of epoch-shaping importance, so THREAD..

Today's Tory strategy for dealing with people who will be able to vote in 2022 has been an absolute masterclass… So many good images doing the rounds of the #YouthStrike4Climate. But I particularly like this one taken by a Getty photographer... The sight of a fifty-something man - who claims to be an educationalist - trolling and bullying a 16-year-old girl, who simply wants nations of the world to have an urgent debate about climate change, is very disturbing.