Storm surge scale idea (Kuykendall scale or K scale) #Hurricane Dorian with sustained winds of 185mph and gusts at over 220mph may force us to consider should the Saffir-Simpson scale expand to category 6? Great article from Scientific American Blog Network #geography #geographyteacher #weather #storms. Should there be a Category 6 hurricane classification? I say no. But, scales are subjective and you can change them to reflect new thinking. Also, you'd need a Category 7, too. □ Article from @ailworth at WSJ has an illustrative infographic.

What do Category 5 hurricane winds do? Here’s an @NHC_Atlantic animation showing their impact (and keep in mind Dorian is an *extreme* Category 5 storm) *****Damage data / correlation: Why We’re Stuck With An Inadequate Hurricane Rating System. Update (Oct. 10, 2018, 2:15 p.m.): Hurricane Michael strengthened into a Category 4 storm before making landfall around 1:30 p.m. 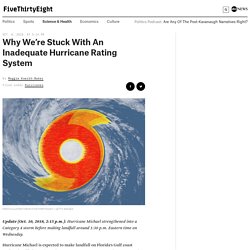 Eastern time on Wednesday. Hurricane Michael is expected to make landfall on Florida’s Gulf coast Wednesday, likely coming ashore as a Category 3 storm — the strongest the panhandle region has seen in 13 years. But knowing the category rating of a hurricane is not the same as knowing how dangerous the storm is. Hurricanes also bring flooding, caused by both rainfall and the storm surge, and water accounts for more deaths than wind in these storms. Yet we still categorize hurricanes by wind speed alone. Sometimes, the Saffir-Simpson hurricane rating system — the scale that assigns a number to a hurricane based on its sustained wind speeds — does a decent job of conveying how concerned people in the path of a storm should be, experts said. 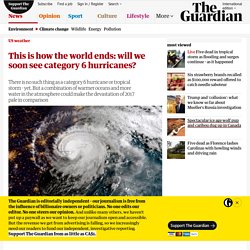 The highest level – the top of the scale for the most powerful, most devastating hurricane or tropical storm capable of destroying entire cities like New Orleans or New York – is a category 5 storm. Meteorologists and scientists never imagined that there would be a need for a category 6 storm, with winds that exceed 200 miles per hour on a sustained basis, sweeping away everything in its path.

Until now, such a storm wasn’t possible, so there was no need for a new category above category 5. Right now, however, there is anywhere from 5 to 8% more water vapor circulating throughout the atmosphere than there was a generation ago. This, combined with warmer temperatures that are driving water up from the deep ocean in places where hurricanes typically form, has created the potential for superstorms that we haven’t seen before – and aren’t really prepared for.

When it does, it will come as quite a shock. How are tropical cyclones categorised? One way is to use the Saffir-Simpson Hurricane Wind Scale - which is a 1 to 5 rating based on wind speed. #TyphoonMangkhut #HurricaneFlorence… SS scale video: Why Hurricane Categories Make a Difference. *****Saffir-Simpson Scale video explainer. This was sent to me and I had to share it. #HurricaneIrma #IRMA. Hurricane Lane is currently a cat 5. Ever wondered how this is measured?… Hurricane Size Comparison. The sizes and power of hurricanes and typhoons, compared [full video. How much damage do Category 5 winds do compared to Category 1 winds? There's a visualization for that (and it's not pretty) *****WOW! This is really well done!□Learn the difference btwn "Category 1-5" hurricanes. #HurricaneHarvey. Beautiful starter image for Year 10 next week #geographyteacher. Storm Surge Fast Draw. Storm surge. A storm surge is possibly one of the most dramatic weather events in the UK resulting from low pressure, high winds and tidal conditions. 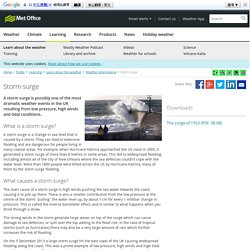 What is a storm surge? A storm surge is a change in sea level that is caused by a storm. They can lead to extensive flooding and are dangerous for people living in many coastal areas. For example, when Hurricane Katrina approached the US coast in 2005, it generated a storm surge of more than 8 metres in some areas. This led to widespread flooding, including almost all of the city of New Orleans where the sea defences couldn't cope with the water level. What causes a storm surge? The main cause of a storm surge is high winds pushing the sea water towards the coast, causing it to pile up there.