Good article on ‘living in the shadow of Etna’ #geographyteacher. Doesn't stop local rugby practice, #SixNationsRugby season after all. Credit □ Rugby Line from 2 March. (19) Parossismo al Cratere di Sud-Est dell'Etna, 4 marzo 2021. Mount Etna illuminates night sky with 1,500-metre lava fountain. Mount Etna’s spectacular eruptions reached a peak on Monday when the volcano’s lava fountains soared to 1,500 metres – a display described by one expert as “one of the most striking in the last few decades”. 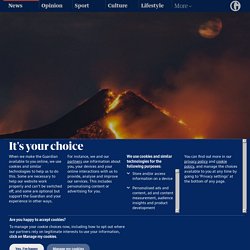 Europe’s most active volcano has been on explosive form in recent weeks, spewing incandescent magma and a copious shower of ash, reaching as far as Catania. According to experts, the fireworks show is part of a Strombolian eruption that is among the normal activities of the more than 3,300-metre-high volcano. “Etna is putting on a show these days,” said Marco Neri, an expert in volcanology and a member of INGV, the Italian national institute for geophysics and volcanology. “This is certainly the strongest explosion in the southern crater that was discovered in 1971. We have not seen such high explosions for years but at the moment there is no risk to the population, apart from the smoke that can create breathing problems for a few hours, and the ash that covers buildings and streets.”

Incredible scenes in Sicily, captured by Pietros, an organic blood orange farmer. Mount Etna is very important to Sicilians, who say that Etna's mood is their mood □

Scientists have established that the whole edifice on the Italian island of Sicily is edging in the direction of the Mediterranean at a rate of 14mm per year. The UK-led team says the situation will need careful monitoring because it may lead to increased hazards at Etna in the future. The group has published its findings in the Bulletin of Volcanology. "I would say there is currently no cause for alarm, but it is something we need to keep an eye on, especially to see if there is an acceleration in this motion," lead author Dr John Murray told BBC News.

Space project to monitor all volcanoes The Open University geologist has spent almost half a century studying Europe's premier volcano. In that time, he has placed a network of high-precision GPS stations around the mountain to monitor its behaviour. Essentially, Etna is sliding down a very gentle slope of 1-3 degrees. Vulcano in all its magnificence, looking towards Lipari and Salina. @EarthSciPlymUni. Breadcrust bomb on Vulcano. In the shadow of Italy's volcanoes. Living in the shadow of Italy's volcanoes Menu The aim of this video is to consider the variety of volcanic landforms and the eruptive hazards in southern Italy. In visiting locations in the Bay of Naples, Sicily and the Aeolian Islands, this video interweaves narrative with interviews of local people affected by recent eruptions, expert guides and scientists tasked with monitoring Italy’s active volcanoes. The film considers the threats from future eruptions as well as the considerable benefits afforded to local people living in the shadow of some of Europe’s most iconic volcanoes.

In this video, we cover: This video is suitable for all ages. Watch the full video here > Watch the trailer below > Download additional resources To make the most of this video we have also created some additional teaching resources to use in the classroom - click on the resources below to view and download. Shops under a volcano? The dangerous lure of Mount Etna. The best view of Mount Etna is from the gods of the ancient Greek amphitheatre in Taormina. 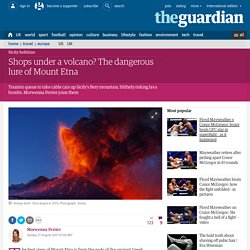 From here it looms over this coastal town, famous for its pistachios and hosting the G7 summit, swallowing up the landscape. The snow stripes the sides, even in early summer. Smoke plumes rise up. It looks almost fake. At nearby Fanaberia Gelateria, though, they say that to them the volcano is always alive. No kidding. Etna erupting - Sicily, Italy. Ice and fire. Mt. Etna (Sicily) yesterday evening, Feb 28. Photo: Saro Barbagallo. Mt. Etna smoke rings!! Keep an eye out on Mt. Etna as it smolders - it likes to be produced these amazing smoke rings! Video: Geoff Mackley.