China One Child Policy infographic homework task - - I don't know how 14 year old students find such amazing ways of representing data! I couldn't do that. #geographyteacher #gcsegeog. 'It's national preservation': Greece offers baby bonus to boost birthrate. As the new year dawned, Maria Pardalakis was in the throes of labour. 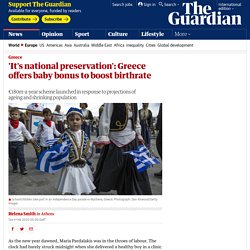 The clock had barely struck midnight when she delivered a healthy boy in a clinic on Crete. With her son’s birth – the first in Greece this year – Pardalakis and her husband, Christos, became the first people eligible for a €2,000 (£1,700) government baby bonus. “It’s been a new year like no other, the best gift my wife could give me,” Christos enthused. “And, sure, the benefit will help – not just us, a lot of families.” Athens’ centre-right government has been galvanised into action on the back of projections that Greece’s population of 10.7 million could shrink by a third in the next three decades unless declining birthrates are reversed.

“People might think this is an issue of national pride but it’s actually one of national preservation,” said Domna Michailidou, a former Cambridge University academic and the deputy minister of labour and social affairs, who has pushed for the bonus and other benefits for parents. China's birthrate falls to lowest level despite push for more babies. China’s birthrate has fallen to the lowest level since the Communist country was founded in 1949, in a sign that efforts to head off a demographic crisis have so far failed. 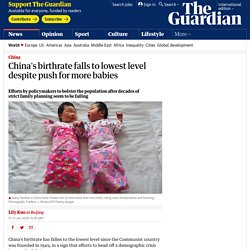 There were 14.6 million births in China in 2019, a drop of about 500,000 from the year before and the third year in a row that the number of births fallen, according to a report from the National Bureau of Statistics published on Friday. It was the lowest number in seven decades, with the exception of 1961, the last year of a famine that left tens of millions dead. This is a great idea!… Viktor Orbán: no tax for Hungarian women with four or more children. Hungary’s populist prime minister, Viktor Orbán, has promised that women who have four or more children will never pay income tax again, in a move aimed at boosting the country’s population. 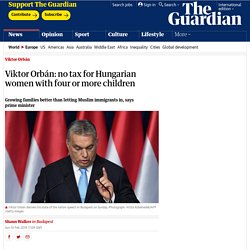 Orbán, who has emerged as Europe’s loudest rightwing, anti-immigration voice in recent years, said getting Hungarian families to have more children was preferable to allowing immigrants from Muslim countries to enter. “In all of Europe there are fewer and fewer children, and the answer of the west to this is migration,” said Orbán in his annual state of the nation address on Sunday.

“They want as many migrants to enter as there are missing kids, so that the numbers will add up. We Hungarians have a different way of thinking. Instead of just numbers, we want Hungarian children. “The people of Europe have come to a historic crossroads,” Orbán said on Sunday, criticising the “mixed population countries” that result from allowing migration. 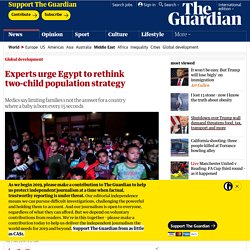 There are eight condoms for one Egyptian pound, about 4p, or ampoules of injectable birth control, for just under 9p. A contraceptive implant lasting three years costs 22p, while copper IUDs – the most popular form of birth control on offer according to Dr Hosny – cost 17p. The low prices, far less than in any Egyptian pharmacy, are due to subsidies provided by Egypt’s health ministry, as clinics like Dr Hosny’s are on the frontline of Egypt’s battle against an exploding birthrate.

A government programme called “two is enough” has been launched to encourage people to limit family size. From this month, the prime minister, Mostafa Madbouly recently announced, the government will cease to provide financial support to a family after their second child. Hosny says the clinic is happy to serve unmarried women. Let's face it, there's nothing good on TV over Christmas - so instead here's a truly amazing story of one daughter, two families a world apart, and a reunion 20 years in the making. ❤️□❤️… 29 October 2015. Ths Chinese government announced the end of One-child policy after 35 years.… China could scrap two-child policy, ending nearly 40 years of limits. China is mulling scrapping its controversial birth restrictions, reversing nearly four decades of family planning policies as birth rates fall. 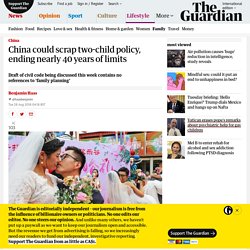 Chinese couples are limited to two children at present, after rules were relaxed from the infamous one-child policy that was in force from 1979 to 2016. Now officials are poised to enact a wide-ranging civil code that would end a policy that has been enforced through fines but was also notorious for cases of forced abortions and sterilisation in the world’s most populous country.

The Procuratorate Daily, a newspaper affiliated with the country’s prosecutor’s office, said the draft code omitted any reference to “family planning” – the current policy which limits couples to having no more than two children. The report did not indicate whether the new policy would raise the limit or allow an unlimited number of children. The Communist party began enforcing a one-child policy in 1979 to slow population growth.