Thermokarst landscapes. Twitter. Twitter. Siberia's enormous hole in the ground is getting bigger - BBC Reel. Places around the world that exist at the extreme end of the spectrum. 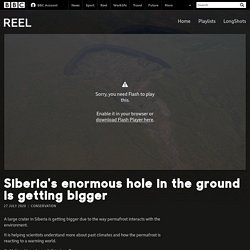 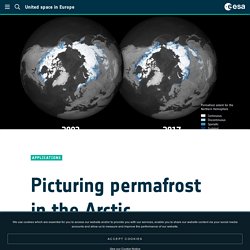 Maps, produced by ESA’s Climate Change Initiative, are providing new insights into thawing permafrost in the Arctic. According to the latest Intergovernmental Panel on Climate Change Special Report, permafrost temperatures have increased to record high levels from the 1980s to present. As a consequence, concern is growing that significant amounts of greenhouse gases could be mobilised over the coming decades as it thaws, and potentially amplify climate change. Flights Detect Millions of Arctic Methane Hotspots. Knowing where emissions are happening and what's causing them brings us a step closer to being able to forecast the region's impact on global climate. 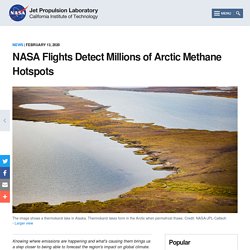 The Arctic is one of the fastest warming places on the planet. As temperatures rise, the perpetually frozen layer of soil, called permafrost, begins to thaw, releasing methane and other greenhouse gases into the atmosphere. These methane emissions can accelerate future warming - but to understand to what extent, we need to know how much methane may be emitted, when and what environmental factors may influence its release.

That's a tricky feat. The Arctic spans thousands of miles, many of them inaccessible to humans. In a new study, scientists with NASA's Arctic Boreal Vulnerability Experiment (ABoVE), found a way to bridge that gap. The paper, titled "Airborne Mapping Reveals Emergent Power Law of Arctic Methane Emissions," was published Feb. 10 in Geophysical Research Letters. Elder says the study is also a technological breakthrough. Christopher Cartwright sur Twitter : "Every day, the same scary litany .BRUTAL data on Methane..plain SCARY over the arctic (surface, mid atmosphere) And get a global view too Please RT #methane #permafrost #arctic #antarctica #ClimateCrisis #ClimateActio. 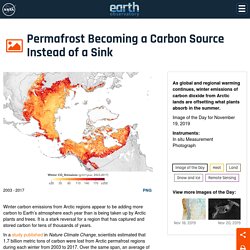 It is a stark reversal for a region that has captured and stored carbon for tens of thousands of years. In a study published in Nature Climate Change, scientists estimated that 1.7 billion metric tons of carbon were lost from Arctic permafrost regions during each winter from 2003 to 2017. Over the same span, an average of 1 billion metric tons of carbon were taken up by vegetation during summer growing seasons. This changes the region from being a net “sink” of carbon dioxide—where it is captured from the atmosphere and stored—into being a net source of emissions. Permafrost is the carbon-rich frozen soil that covers about one quarter of Northern Hemisphere land area; it encompasses vast stretches of Alaska, Canada, Siberia, and Greenland. NASA Earth Observatory image by Joshua Stevens, using data from Natali, S.M., et al. (2019).

Greenland airport becomes latest victim of climate change. Greenland's main airport is set to end civilian flights within five years due to climate change, as the melting of permafrost is cracking the runway. 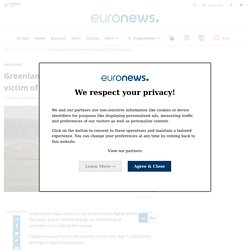 Kangerlussuaq Airport, the country's main hub, had 11,000 planes landing or departing last year. Permafrost, the layer of soil usually frozen solid, is shrinking as temperatures rise. Arctic-tundra-permafrost-thaw-shrub-1. New research finds areas in the Arctic with dwarf birch are experiencing longer periods with no snow, resulting in deeper thawing of the ground, and that may lead to faster thawing of the permafrost. 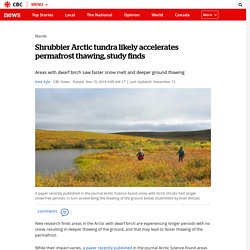 While their impact varies, a paper recently published in the journal Arctic Science found areas with birch shrubs had longer snow-free periods, in turn accelerating the thawing of the ground below. "We discovered that the date at which the snow melts is a key driver in how deep the ground will thaw in the summer," said Evan Wilcox, a geography PhD candidate at Wilfrid Laurier University and the paper's lead author. "Areas where the shrubs protrude through [the snow], the snow melts on average a week earlier," he said. Taller shrubs paired with warmer air temperatures will likely result in more permafrost thawing, he said.

Earth - There are diseases hidden in ice, and they are waking up. Throughout history, humans have existed side-by-side with bacteria and viruses. 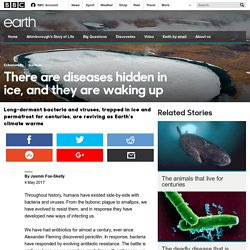 From the bubonic plague to smallpox, we have evolved to resist them, and in response they have developed new ways of infecting us. We have had antibiotics for almost a century, ever since Alexander Fleming discovered penicillin. In response, bacteria have responded by evolving antibiotic resistance. The battle is endless: because we spend so much time with pathogens, we sometimes develop a kind of natural stalemate.

However, what would happen if we were suddenly exposed to deadly bacteria and viruses that have been absent for thousands of years, or that we have never met before? We may be about to find out. In August 2016, in a remote corner of Siberian tundra called the Yamal Peninsula in the Arctic Circle, a 12-year-old boy died and at least twenty people were hospitalised after being infected by anthrax.