Join us @HackneyMuseum today 4.30-6 pm. For the Launch of Child Migrant Stories Resources for Teachers #ChildMigrantsWelcome @QMULGeography. *****Welcome to Italy: this is what a real immigration crisis looks like. Let us suppose that along the coast of Normandy up to one million non-EU migrants are waiting to be packed like sardines in small unseaworthy vessels and to cross the English Channel. 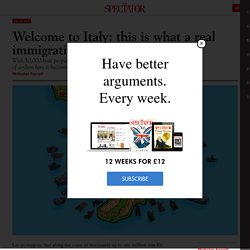 Let us suppose that first the Royal Navy, then the navies of a dozen other EU countries, start to search for all such vessels in the Channel right up to the French coast, out into the North Sea and the Atlantic even, and then ferry all the passengers on board to Dover, Folkestone, Hastings, Eastbourne and Brighton in a surreal modern-day never-ending version of the Dunkirk evacuation of 1940. Would the British government agree to take them all?

What of the British people? And if they did agree, what would the British government and people do with all the migrants? How would they cope? Well, Italy has been invaded in just this way, by migrants from many nations all coming over here from Libya. Here’s how it works. *****Museum shows migration is 'everyone's' story. Image copyright Sir Stephen Sedley From this week London gets a new Migration Museum. 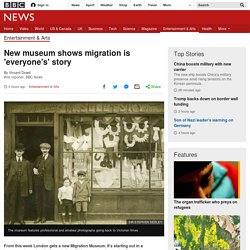 It's starting out in a temporary home but the hope is that within a couple of years it will move to a permanent base. The director is a former immigration judge, who says almost all of us have a migration story somewhere in our family background. Estate agents have declared that Vauxhall, just south of the Thames, is London's emerging new cultural quarter. A Map A Day on Instagram: “People in the Contiguous United States Who Don't Speak English As Their First Language. Made by Reddit user CuriousCityYT. ➖ Source thread:…” *****Impact of immigration on the US working-age population. ******A map of the world according to second languages. Language remains an inescapable leftover of conquest and empire. 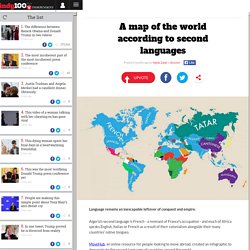 Algeria's second language is French - a remnant of France's occupation - and much of Africa speaks English, Italian or French as a result of their colonialism alongside their many countries' native tongues. MoveHub, an online resource for people looking to move abroad, created an infographic to demonstrate the second languages of countries around the world. Europe The countries which once belonged to the former Soviet Union – Estonia, Latvia, Lithuania and Ukraine – still hold Russian as their second language.

Romania, Serbia and Slovakia’s collective second language is Hungarian, from their membership in the Austro-Hungarian Empire. North America Canada's second official language is French, whereas both Alaska and the US's second language is Spanish. South America Central America Africa Italian is spoken in Libya, and English is the second language of both Egypt and Sudan. Asia and the Middle East. Imagine the desperation. Top 10 sender and host nations of #migrants. #Migration tends to be skilled and benefit the host country. The Pogues- Thousands Are Sailing. ***% emigrants by country. ***Share of population living abroad #Ireland 18% #Portugal 14% #UK 7% #Canada 4% #Sweden 3% #Australia 2% Charlie Chaplin's The Immigrant (1917) Welcome to Razlovci, the village missing a generation by UNDPEurasia - Exposure.

Immigrants don't harm economies. In fact, the opposite may be true. Immigrants have become a major scapegoat in recent years for sputtering Western economies. 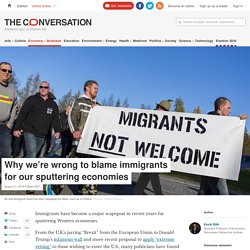 From the U.K.’s jarring “Brexit” from the European Union to Donald Trump’s infamous wall and more recent proposal to apply “extreme vetting” to those wishing to enter the U.S., many politicians have found success by casting immigrants as a threat to the physical, social and economic welfare of natives. In short, Americans (and our European brethren) are unhappy, and many are convinced immigration brings harm. A recent poll found that almost two-thirds of Americans think immigration, including the legal kind, “jeopardizes the United States.”

While it has become a popular notion in the West that immigrants jeopardize the job prospects of natives, over 30 years of economic research (including my own) gives strong reason to believe otherwise. And in fact, the opposite may be more likely: There’s evidence immigrants actually promote more economic growth. This is what would happen if Australia halted immigration. Crowds thin in international airport arrival halls. 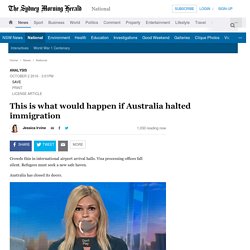 Visa processing offices fall silent. Refugees must seek a new safe haven. Australia has closed its doors. Loaded: 0% Progress: 0% 'There will always be people trying to cross to England' Migrants are good for advanced economies, says the IMF. Why are white people expats when the rest of us are immigrants? An economic impact of migration you might not have considered. Immigration: beneficial or detrimental to the host country? In which European countries is immigration the biggest public concern? @YouGov. Migrants sent half a trillion dollars home last year. These maps show where the money went. Andrew Sachs, famed for playing Manuel in Fawlty Towers, died recently. He spoke in 1979 about life and playing the man who knew nothing.

#Multicultural #Australia: over 50% of #GenX (born 1964-81) had at least one parent born overseas. That generation created massive wealth! Anti-immigrant sentiment has been rising since 1980 with a small dip during the rich and prosperous 1990s. "A family of seven sons and one daughter, Ellis Island." 1904.