Youtube. Breaking: Hitachi will tomorrow terminate plans for new nuclear power station at Wylfa in Anglesey - in yet another blow to the government's struggling nuclear programme. Dounreay. Fukushima. Twitter. It turns out that prematurely retiring your nuclear powerplants is a great way to end up burning more coal... Based on data on planned coal generation from. Svein T veitdal sur Twitter : "Nuclear power ‘cannot rival renewable energy’ Far from tackling climate change, nuclear power is an expensive distraction whose safety is threatened by wildfires and floods, experts say.…

Chernobyl. Clear and informative account of the Fukushima nuclear disaster; using lots of useful stats to explore why it’s taken so long to clear up. Great for energy for A level! #geographyteacher. Eight years after Fukushima nuclear disaster, most evacuees under age 50 say they have no intention of returning. High radiation detected at Fukushima plant. The operator of the crippled Fukushima Daiichi nuclear power plant has released the results of its latest probe of the site. A remote-controlled inspection of the Unit 2 reactor containment vessel last month detected a maximum of 8 sieverts per hour of radiation.

Experts say exposure to such radiation for about an hour would be fatal. Officials from Tokyo Electric Power Company, or TEPCO, released the results on Thursday. They said the radiation reading was taken near what appeared to be fuel debris, the term used to describe a mixture of molten fuel and broken interior parts. The finding shows that nearly 7 years after the meltdowns, radiation levels remain so high that they present a major challenge to decommissioning work. Plans for major nuclear power station in Wales win green light. Plans for a major new nuclear power station in Wales have taken a crucial step forward as UK regulators approved the project. 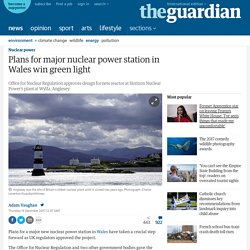 The Office for Nuclear Regulation and two other government bodies gave the green light on Thursday for the Japanese reactor design for Horizon Nuclear Power’s plant at Wylfa, marking the end of a five-year regulatory process. Duncan Hawthorne, Horizon’s chief executive, said: “This is a huge milestone for Horizon and a major leap forward for us in bringing much-needed new nuclear power to the UK.” Attention will now turn to financing the Hitachi-backed project on the island of Anglesey, which was the site of Britain’s oldest nuclear plant until it closed two years ago. During a visit by UK ministers to Japan last December, it emerged that London and Tokyo were considering public financing for Wylfa. This would be a significant break with the UK government’s previous approach. Mysterious Radioactive Cloud Over Europe Hints At Accident Farther East : The Two-Way. Monitoring stations similar to this one in Germany detected unusual radioactive material over Europe last month. 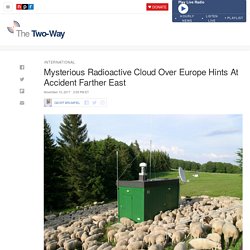 CTBTO/FLICKR hide caption toggle caption Monitoring stations similar to this one in Germany detected unusual radioactive material over Europe last month. European authorities are providing new details about a cloud of mysterious radioactive material that appeared over the continent last month. *****''I knew perfectly well that nobody would be able to correct my mistake if I had made one'' Fascinating study in decision-making. What a time to be alive (HT @RossjournoClark) The Nuclear Power Struggle. The UK appears to be embracing nuclear, a huge U-turn on government policy from just two years ago. Yet this seems to be going against the grain globally. Can nuclear help countries meet their commitments to the Paris treaty?

When a 15-metre tsunami disabled the power supply of three nuclear reactors at Fukushima in Japan in 2011, causing the cores to melt, the disaster seemed to represent the death knell for the nuclear industry. Not only was the damage catastrophic, but the industry now resembled an also-ran, overtaken by advances in renewables and nimble smart grids. Big, clunky and fabulously expensive, nuclear was a dinosaur in a modern age of emerging alternatives.

*****"Artist's impression of UK plutonium piles" 1972 (Ah! Fluffy, bucolic Ladybird) Billboard swearing Manhattan Project workers to secrecy, 1945. [Sits down to finally write] Satan: "You know you can wander round Pripyat/Chernobyl on Google Street View?" Me: "No... no, please..." #Map of #nuclear plants across #Europe. #Germany soon to retire its last plants while #France is still going strong. Here's a thing you probably didn't know: nuclear is the largest source of electricity in the EU. Today in Ladybird 9 Feb 1966 a new nuclear reactor, "the system for the next century", is announced for Dounreay. Hinkley Point C subsidy scheme being investigated by National Audit Office. The National Audit Office has begun an investigation into the controversial subsidy regime for the planned new Hinkley Point C nuclear plant in Somerset, a week after Brussels approved taxpayer support for the project. 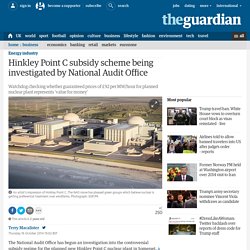 The financial watchdog, which scrutinises public spending on behalf of parliament, said it would be checking whether the guaranteed prices of £92 a megawatt hour – double the current cost of electricity – represented “value for money”. The NAO move, which follows pressure from a House of Commons committee, puts pressure on the government but has pleased green groups which believe nuclear is getting preferential treatment over windfarms.

“Our work will cover the Department of Energy and Climate Change’s commercial approach to securing this deal and the proposed terms of the contract, to report to parliament on value for money and the resulting risks which the Department must manage,” said the NAO in a formal statement. Nuclear Energy and Risk - Views of the World. Nuclear power contributes only a small share to the global energy production. 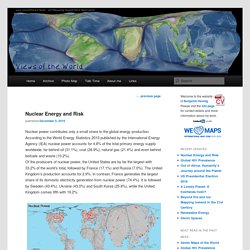 The United Kingdom’s production accounts for 2.9%. In contrast, France generates the largest share of its domestic electricity generation from nuclear power (74.4%). Swiss try to give away nuclear plants, but find no takers. Energy Transition The operator of Switzerland’s nuclear reactors, Alpiq, reportedly offered reactors to France’s EDF at no cost or “a symbolic franc.” 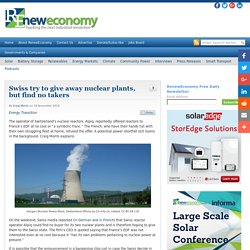 The French, who have their hands full with their own struggling fleet at home, refused the offer. A potential power shortfall still looms in the background. Craig Morris explains. Gösgen Nuclear Power Plant, Switzerland (Photo by Ch-info.ch, edited, CC BY-SA 1.0) Luxembourg offers cash to help close ageing French nuke plant. Luxembourg offered on Monday to chip in financing to close an ageing French nuclear power plant near its border, saying the tiny nation could be obliterated if the station malfunctioned. 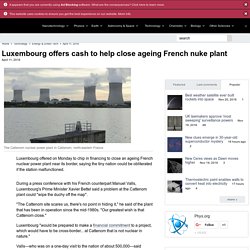 During a press conference with his French counterpart Manuel Valls, Luxembourg's Prime Minister Xavier Bettel said a problem at the Cattenom plant could "wipe the duchy off the map". "The Cattenom site scares us, there's no point in hiding it," he said of the plant that has been in operation since the mid-1980s. "Our greatest wish is that Cattenom close. " France Passes Law To Halve Its Energy Use, Slash Fossil Fuels And Nuclear. Einstein(s) celebrating... #OTD 1956 Behind the scenes at Calder Hall atomic power station, near Workington, Cumbria.