s41598 021 83413 8. Neanderthals: How close are we to our extinct relatives? The known differences between Homo sapiens and Neanderthals appear to grow ever slighter. 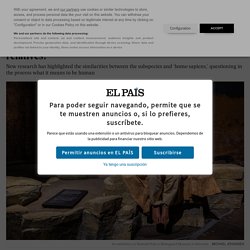 As scientists prove that we have more in common with those once considered distant cousins of humankind, new writing on the topic has exploded. The deluge of scientific papers, revelatory books and exhibitions focuses on dismantling preconceptions of Neanderthals, who lived in Asia and Europe for at least 300,000 years. As Israeli historian and essayist Yuval Noah Harari writes: “just by being, Neanderthals challenge some of our most cherished ideals and delusions.

Neanderthals force us to question the belief that Homo sapiens is the apex of creation and, more generally, what it means to be human. These questions are now more urgent than ever.” Neanderthals represent another way of being human and that is something that is very difficult for us to imagine Paleoanthropologist Juan Luis Arsuaga Harari was reviewing the bestselling book Kindred. In a video call, Wragg Sykes expresses a similar view. Most southerly evidence of Neanderthals revealed in cave in Palestine. New archaeological evidence from the cave, in the hills to the north of Jerusalem, also suggests for the first time that Neanderthals used a stone tool-making technology thought to have been unique to modern humans. 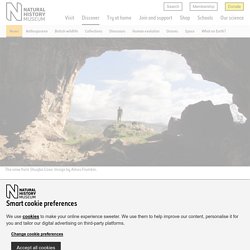 Chris Stringer, a human evolution expert at the Museum, says, 'There are two fascinating things about this discovery. 'Firstly, we have speculated for a long time whether Neanderthals ever got to Africa. Shuqba is just a few hundred miles from Africa, so this finding really adds to the possibility that they did make it there. 'Secondly, the stone tools found there were thought to be the product of modern humans. Longer overlap for modern humans and Neanderthals. Textbooks also give rise to gems like this:… Oldest Neanderthal DNA Found in Italian Skeleton. The calcite-encrusted skeleton of an ancient human, still embedded in rock deep inside a cave in Italy, has yielded the oldest Neanderthal DNA ever found. 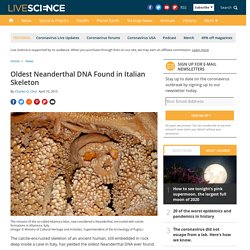 These molecules, which could be up to 170,000 years old, could one day help yield the most complete picture yet of Neanderthal life, researchers say. Although modern humans are the only remaining human lineage, many others once lived on Earth. The Ice Age ❄️ sur Twitter : "From the #IceAgeArchive This Neanderthal skeleton has been entombed in calcite inside an Italian cave for over 150,000 years. These bones have yielded the oldest known samples of Neanderthal DNA. Image credit and more: https: Neanderthal 'skeleton' is first found in a decade. Image copyright Graeme Barker Researchers have described the first "articulated" remains of a Neanderthal to be discovered in a decade. 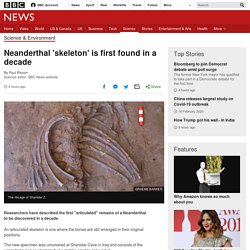 An articulated skeleton is one where the bones are still arranged in their original positions. The new specimen was uncovered at Shanidar Cave in Iraq and consists of the upper torso and crushed skull of a middle-aged to older adult. Excavations at Shanidar in the 1950s and 60s unearthed partial remains of 10 Neanderthal men, women and children. During these earlier excavations, archaeologists found that some of the burials were clustered together, with clumps of pollen surrounding one of the skeletons. The researcher who led those original investigations, Ralph Solecki from Columbia University in New York, claimed it was evidence that Neanderthals had buried their dead with flowers.

This "flower burial" captured the imagination of the public and kicked off a decades-long controversy. Early analysis suggests the specimen is more than 70,000 years old. Xavi Bros sur Twitter : "African population have 0.5% of their genome from Neanderthals. The genes have been carried to Africa by a human population that left Africa 100-150000 years ago, interbred with Neanderthals outside of Africa and then returned: ht. Neanderthals were human too. Brilliant artwork by Tom Björklund… *****10 surprising facts about Neanderthals.

The misconception of Neanderthals as stooped, brutish, hairy and dumb comes primarily from our preconceived notions. 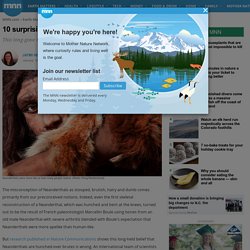 Indeed, even the first skeletal reconstruction of a Neanderthal, which was hunched and bent at the knees, turned out to be the result of French paleontologist Marcellin Boule using bones from an old male Neanderthal with severe arthritis blended with Boule's expectation that Neanderthals were more apelike than human-like. But research published in Nature Communications shows this long-held belief that Neanderthals are hunched-over brutes is wrong. An international team of scientists analyzed the skeleton of a Neanderthal man using CT scans and discovered the spine was straighter than that of modern-day humans. Also, the skeleton had a wider, lower thorax and a horizontal-shaped rib cage — suggesting Neanderthals had a greater lung capacity and breathed primarily using their diaphragm. 1.

Writing for Smithsonian magazine, writer Owen Edwards describes the sites: 2. Dr. 3. *****9 surprising facts about Neanderthals. Geochemical evidence supports the view that Neanderthals were able to control fire and start fires from scratch. New research sheds light on Neanderthals' distinctive features. With their prominent noses, protruding faces and swept-back cheekbones, Neanderthals were nothing if not striking. 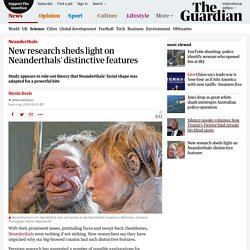 Now researchers say they have unpicked why our big-browed cousins had such distinctive features. I love these character studies of Neanderthals by the artist Tom Björklund. So rarely are they pictured as if they were real people. See hi…