Murray-Darling Basin: NSW government officials busted favouring irrigator groups. Just a week after the New South Wales corruption watchdog concluded that the state’s water bureaucrats had an “entrenched irrigator focus” that made “policy making vulnerable to improper favouritism”, the same division has been caught singling out sympathetic irrigator groups and discussing how to sideline critics. 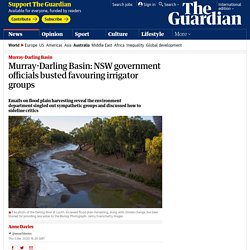 The deliberate strategies were contained in an internal email chain that was inadvertently sent out to a number of stakeholders this week. Waters of Murray-Darling rivers join for first time in two years. The waters of the Murray River and the Darling River in NSW have joined for the first time in two years, in a milestone for drought-stricken communities in New South Wales. 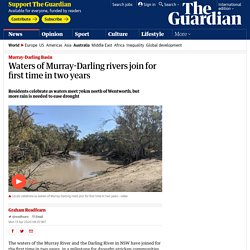 Water flowing down the Darling joined water backed up from the Murray River around 5.30pm on Sunday evening about 90km upstream from Wentworth in NSW. Sheep farmer and wine grape grower Mat Robertson, 50, witnessed the waters join at the edge of his property, Ashvale Station, on Sunday evening and had a small celebration. On Monday morning he said he “had a bit of a headache”. “Most people are just happy to see a healthy river,” he told Guardian Australia. “There have been no flows for two years.

Robertson watched as isolated pools were flushed by water as it flowed down the Darling River, which is the boundary of his property. “It pushed the green stuff out and then you have this muddy looking beautiful water. “Without water, everyone’s stock has been just going where it wants because there’s no river to stop them.” Climate change likely to blame for dwindling Murray-Darling inflows, report finds. The amount of water in the Murray river system is now only about half of what it was in the preceding century and the frequency of dry years has increased, a much-awaited report has found. 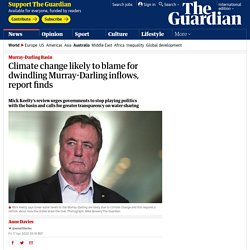 The report by the interim inspector general of the Murray-Darling Basin Water Resource, Mick Keelty, has rejected a widely held view in the southern basin that the current conditions there are “a man made drought” brought on by the policies of the Murray-Darling Basin Authority and unfair extractions in the northern basin. Instead Keelty has found that the problem is likely due to climate change and warned that this will require a rethink by the states about how they share the river.

Tough nut to crack: the almond boom and its drain on the Murray-Darling. Neale Bennett, an almond grower in Mildura, ripped out his sultana grapes and dried fruit crop and began planting almonds in the 1990s. 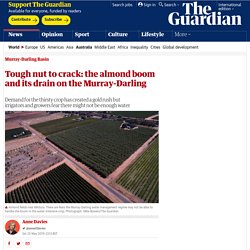 He’s ridden the wave of increased global demand for almond milk, almond meal and, well, just almonds. Rising prices for the sweet brown nuts, mechanised equipment to harvest them and the ability to trade water up and down the Murray to water the thirsty trees have created a kind of agricultural gold rush along the waterway. Over the last decade, big almond producers like Olam have bought up land around the booming town near the border of New South Wales and South Australia. Since 2016, 15,000 hectares of new trees have been planted, adding another 50% to the 32,000 hectares already there. But with increasingly severe drought conditions, questions are being asked about whether the irrigators are facing a potential catastrophe of their own making. “A lot of the development has gone on due to unbundling,” says Bennett. Scores of dead fish floating on the Darling River in Menindee. Thousands more fish have died in a key river system in drought-hit eastern Australia - just weeks after up to a million were killed - sparking fears an ecological disaster is unfolding. 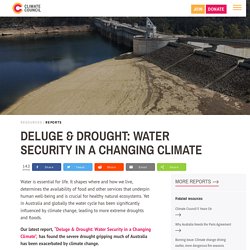 It's not perfect but implementing Murray-Darling plan in full can work. The latest proposal to cut 605bn litres of water from flowing down the Murray-Darling river system will test the nation’s faith in water reform. 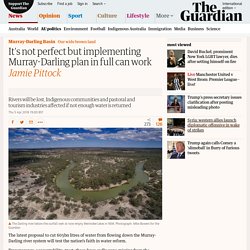 Transparency, accountability, trust: these have sadly gone missing from the nation’s plan for the health of the river system. Allegations of water theft, inequity for downstream communities and poor governance have all shaken the foundations of faith in the plan that state and federal governments agreed to in 2012. There is no perfect plan.