We know there will be another volcanic eruption in the Cascades. We don’t know when, but we can prepare for it by simulating how the volcanology community might respond to such an event. @DiscoverMag @USGSVolcanoes. Twitter. Q: What caused the Cascade Range volcanoes? A: The motion of the tectonics plates creates the volcanoes. When the descending oceanic plate reaches fifty miles below the surface, the rock melts into magma. The magma rises to the surface forming volcanoes.

USGS Volcanoes□ sur Twitter : "#40YearsAgo at #MountStHelens: People stranded along I-90, powdery ash blows everywhere. Sheriffs start slow passage of motorists on I-90 west, releasing car every 4 min & told to drive 20 mph. Plans to dredge Columbia River. Mika McKinnon sur Twitter : "We don’t think about volcanoes being a Canadian problem, and we have absolutely no justification for that It’s been less than 250 years since the Tseax eruption killed 2,000 Nisga’a in northern BC. It’ MSH at 40. The Eruption of Mount St. Helens in 1980.

Like a sinuous snake slithering over the landscape, rivers twist and turn to release energy as they journey to the sea. Make your own #Landsat flipbook of the Ucayali River meandering through Peru. #EarthDay #EarthDayAtHome @zzsylvester @USGSLandsat. *****Timelapse: World of Change: Devastation and Recovery at Mt. St. Helens. The 1980 eruption of Mt. 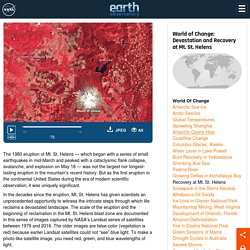 St. Helens — which began with a series of small earthquakes in mid-March and peaked with a cataclysmic flank collapse, avalanche, and explosion on May 18 — was not the largest nor longest-lasting eruption in the mountain’s recent history. But as the first eruption in the continental United States during the era of modern scientific observation, it was uniquely significant. In the decades since the eruption, Mt. St. The May 18 eruption began with an earthquake that caused the northern flank of the mountain to collapse, producing the largest landslide in recorded history.

When the mountain collapsed, it was like uncorking a bottle of champagne: hot rocks, ash, gas, and steam exploded upward and outward to the north. Not surprisingly, the first noticeable recovery (late 1980s) takes place in the northwestern quadrant of the blast zone, farthest from the volcano. April 1, 1980, eruption plume of Mt. St. Helens as seen from the Timberline Parking area, south of the mountain □… 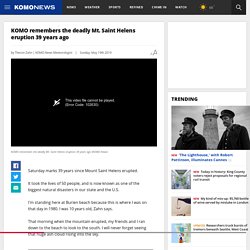 It took the lives of 50 people, and is now known as one of the biggest natural disasters in our state and the U.S. I'm standing here at Burien beach because this is where I was on that day in 1980. I was 10 years old, Zahn says. That morning when the mountain erupted, my friends and I ran down to the beach to look to the south. I will never forget seeing that huge ash cloud rising into the sky. NWS Seattle sur Twitter : "By this point in time on May 18, 1980, the St Helens ash plume was quickly moving aloft and beginning its eastward trek. Instability in the atmosphere created by the plume created thunderstorms & mammatus clouds. Here's the view. Geography made easy sur Twitter : "On this day 39 year ago the #volcano mount St. Helens erupted .... A reminder of just how powerful the #volcanicerruption was - great little movie for the classroom #geography #geographyteacher #teacher.

Washington State Dept. of Natural Resources sur Twitter : "Mount St. Helens erupted 39 years ago today, taking 57 lives and destroying 230 square miles of forest. Ash traveled east on trade winds into Montana, while pyroclastic flows and lahars flowed dow. *****Hours lost: 6. Reason: Volcano (Mount St Helens) *****"Vancouver! Vancouver! This is it!" May 18, 1980 David Johnston's last radio contact as Mt. St. Helens erupted. Remembering a brave scientist. Philippa Demonte sur Twitter : "RIP David Johnston, the USGS volcanologist who was on observational watch of a bulging Mount St Helens when a landslide released the pressure within causing a sideways eruption. Volcanologist Harry Glicken, who took this ph. *****This photo demonstrates the initial Mount St. Helens May 18, 1980 eruption and the reaction of this climber. Photo from Mt Adams by John V. Christiansen around 8:32 am local time on May 18, 1980 & published in a 1981 Nati.

Probably the most famous eruption in recent #history: Mount St. Helens before and after the eruption of 1980. Source. In the same envelope where these original prints from May 18, 1980, at 7pm.… Public Land Lover sur Twitter : "A pilot friend of my grandparents (unknown) took these pictures of @MtStHelensNVM on March 30, 1980, printed them and sent them to my grandparents stuffed inside a greeting card. I found them last year when I was helping t.

Dead tree trunks sticking out of the lahar deposit from the 1780s eruption of Mount Hood. #IAVCEI2017. Rainier had a little lenticular action going on. Not much, but it looked cool. Unseen photos of deadly 1980 Mount St. Helens eruption. On May 18, 1980, Mount St. 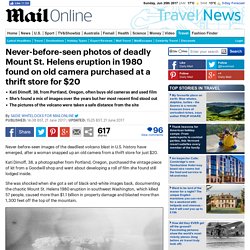 Helens in southwest Washington erupted. The cataclysmic event killed 57 people and blasted more than 1,300 feet off the top of the mountain. The eruption was triggered by a magnitude five-plus earthquake, which was accompanied by a debris avalanche. Deadliest in U.S. history: The eruption killed more than 50 people and blasted more than 1,300 feet off the mountain's peak This abruptly removed the pressure at the top of the volcano, allowing hot water to quickly become steam, expanding ‘explosively,’ according to USGS. A wave of decreasing pressure travelled down the volcano to the magma reservoir lying below. The magma then began to rise and bubble, creating a massive eruption that lasted for nine hours. The debris avalanche travelled westward as far as 14 miles down the North Fork Toutle River valley, with a total volume equal to one million Olympic swimming pools. Unseen photos of Mt. St. Helens eruption discovered in forgotten camera at Goodwill.

By: Ashli Blow, KIRO 7 News Updated: 1 of 6 Share this with your friends! 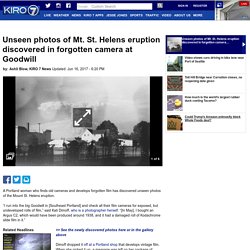 From Unseen photos of Mt. St. A Portland woman who finds old cameras and develops forgotten film has discovered unseen photos of the Mount St. “I run into the big Goodwill in [Southeast Portland] and check all their film cameras for exposed, but undeveloped rolls of film,” said Kati Dimoff, who is a photographer herself. *****Mount St. Helens Eruption, 1980. Eruption of Mt. Saint Helens as viewed by climbers on nearby Mt. Adams, 1980. *****Analyzing Mt St Helens before and after the 1980 eruption. 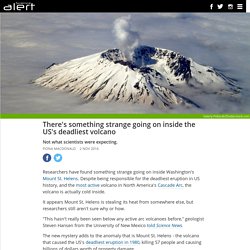 Helens. Despite being responsible for the deadliest eruption in US history, and the most active volcano in North America's Cascade Arc, the volcano is actually cold inside. It appears Mount St. Helens is stealing its heat from somewhere else, but researchers still aren't sure why or how. "This hasn't really been seen below any active arc volcanoes before," geologist Steven Hansen from the University of New Mexico told Science News. Mt. St. Helens eruption, 1980. *****Eruption of Mt. Saint Helens as viewed by climbers on nearby Mt. Adams, 1980. *****MSH: Relive the #1980 eruption of #MountStHelens week of April 24- As tourist season approaches, #volcano remains closed. View from Portland, Oregon of the #MtStHelens □□ eruption in 1980.

5/18/80 anniversary of #MtStHelens eruption: A pic of memorial in Menlo Park for David Johnston, @USGS scientist who died during eruption. On this day 37 years ago, a catastrophic eruption changed Mount St. Helens forever #earthscience #history. Spirit lake in 2016 with trees still floating from the #MountStHelens May 18 1980 eruption. Surreal view of mammatus clouds under Mt St Helens ash plume spreading E over Washington #OnThisDay in 1980 (Photo: D. Miller, Ephrata, WA) #MtStHelens during its May 18,1980 eruption. See more aerial images at #tbt.