*****US Border: Risking everything for an American dream. Risking Everything to Come to America on the Open Ocean. Below him, a pair of pangas appeared. 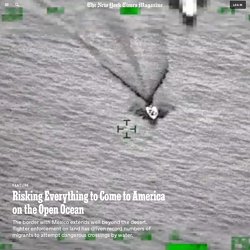 They were heading northeast from offshore fishing grounds toward Ensenada, heavy with bundled nets. The wind was blowing chop across a moderate swell. Even loaded with gear and, presumably, catch, they zipped along at 27 knots, bounding and slamming into waves as they beat their way to port. This kind of speed can be decisive. When winds subside and seas go calm, a panga crowded with migrants and pushed by the 200-horsepower Yamaha outboards common to Baja’s fleets can cruise at more than 30 knots, slipping past the authorities and quickly hitting drop-off points. Enforcement difficulties are compounded by gaps in patrol schedules.

Agents also say they have seen indications of real-time smugglers’ communications. Even as public tensions have accompanied enforcement, Southern California has experienced a rise in boat-smuggling traffic and migrant drownings, all but ensuring those tensions will continue. US-Mexico border wall: Kids play together on seesaws - CBBC Newsround. LUIS TORRES/AFP/Getty Images Three bright pink seesaws were put into the border wall between the United States and Mexico. 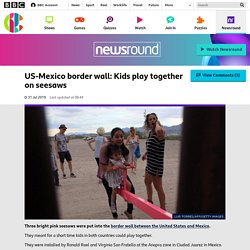 They meant for a short time kids in both countries could play together. They were installed by Ronald Rael and Virginia San Fratello at the Anapra zone in Ciudad Juarez in Mexico. They then posted photos and videos on social media of adults and children using them. To enjoy the CBBC Newsround website at its best you will need to have JavaScript turned on. Ronald Rael described it as a "Teetertotter Wall" and that seeing them being played on was "an event filled with joy, excitement, and togetherness". Pink seesaws across US-Mexico border named Design of the Year 2020.

A collection of bright pink seesaws that allowed people to interact over the US-Mexico border has won the prestigious Design of the Year award, with its creators saying they hoped the work encourages people to build bridges between communities. 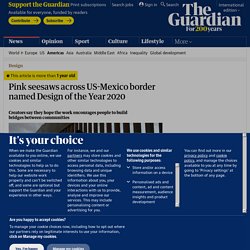 The Teeter Totter Wall, which bridged across El Paso in Texas and Ciudad Juárez in Mexico during a 40-minute session, was described as not only feeling “symbolically important” but also highlighting “the possibility of things” by the judging panel. What a brilliant starter image for a lesson on borders! #geographyteacher. Fluorescent-pink seesaws were fitted on a frontier fence along the U.S.-Mexico border to symbolically bridge the divide… Twitter. American Gothic. Painting by Grant Wood American Gothic is a 1930 painting by Grant Wood in the collection of the Art Institute of Chicago. 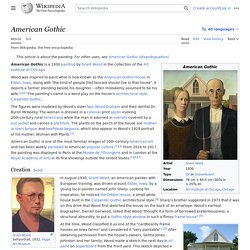 Wood was inspired to paint what is now known as the American Gothic House in Eldon, Iowa, along with "the kind of people [he] fancied should live in that house". It depicts a farmer standing beside his daughter – often mistakenly assumed to be his wife.[1][2] The painting is named for the house's architectural style. The figures were modeled by Wood's sister Nan Wood Graham and their dentist Dr. Byron McKeeby. “The New American Gothic” by Criselda Vasquez (Oil on Canvas 72″ x 48″) In this oil on canvas painting by Criselda Vasquez, she uses her parents to reinterpret and contemporize the iconic 1930 painting by Grant Wood, American Gothic. 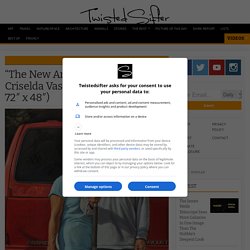 Completed in 2017 and measuring 72 inches tall and 48 inches wide, Vasquez adds: Twitter. Magician Dynamo appears to walk straight through Trump's border wall… Laiken Jordahl sur Twitter : "People still tell me that Trump isn’t building new wall, that he’s only replacing existing barriers. I wish they were right. Take a look at the stark difference between tiny vehicle barriers & the massive wildlife-killing wal. #Map shows the most common origins of immigrants in each US state, excluding immigrants from Mexico. Source. Julia Macfarlane sur Twitter : "An excellent podcast and a must-listen for anyone who works on immigration and foreign aid policy. What is the root cause of Central American migration? It’s not so much violence - but poverty and food insecurity. Mauricio Martínez sur Twitter : "Artists installed seesaws at the border wall so that kids in the U.S. and Mexico could play together. It was designed by architect Ronald Rael. ⁣ ⁣ Beautiful reminder that we are connected: what happens on one side impacts.

"The income gap between the United States and Mexico is the largest between any two contiguous countries in the world." David Kennedy. American GDP is nine times that of Mexico.… Father-daughter border drowning highlights migrants' perils. Sir Michael Palin: "Immigration has done an enormous amount of good" In brief 'Most people want to live peacefully with their neighbours' Travel forms a major part of Palin’s new live show Sir Michael Palin is the most famous traveller since Gulliver. 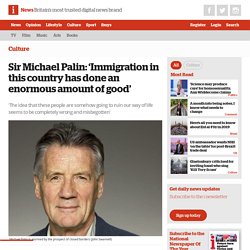 In a series of epic and widely loved TV documentaries, he has journeyed from the North Pole to North Korea – and all points in between. So he is extremely well placed to assess the importance of travel. In a clear reference to the toxic schisms caused by Brexit, Palin emphasises that it is vital to remain open to other cultures; when you close borders, you close minds. “It saddens me that people should be mistrustful of foreigners to such an extent that they would rather not mix with them. Trump wall - all you need to know about US border in seven charts. Trump supporters build US-Mexico barrier. Image copyright Facebook, courtesy We Build the Wall A group of Trump supporters has begun building the first privately constructed US-Mexico border wall after a crowd-funding campaign. 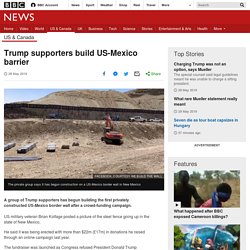 US military veteran Brian Kolfage posted a picture of the steel fence going up in the state of New Mexico. He said it was being erected with more than $22m (£17m) in donations he raised through an online campaign last year. The fundraiser was launched as Congress refused President Donald Trump funding for his signature campaign promise. Image Copyright @BrianKolfage @BrianKolfage. BBC Newsround sur Twitter : "The US-Mexico border is over 3000km long. People live, work and go to school on either side of it. We spoke to them about what they think of Donald Trump's border wall plans. Watch all of Newsround's Living With The Wall repor. Simon Kuestenmacher sur Twitter : "Birthplace of US immigrants as % of total population by country of birth (1850-2017). Migration shifted from Europe to the Americas. Y-Axis shows that today about 14% of the US population was born abroad. Not very high w.

100 years ago: July 9, 1919. This is a wonderful thread that will be read and considered by approximately zero members of the MAGA cult.… The Killers - Land Of The Free. 6 things that could topple Donald Trump's border wall. Three Places Where Migrants Tried to Cross the Border, Facing Tear Gas and Barbed Wire. Five million steps to the American dream #ibgeog #core #hl #flipboard. Eyes of a #Dreamer on the table for a "forbidden picnic. #Map of #USA shows the 100 mile zone. If you live or work within the area depicted in orange ICE agents can stop you and demand you prove you're a US citizen. Source. Real talk from @IanVolner, reporting from the US-Mexico border on those wall prototypes. Girl on the street. Hollywood, California. April 1942. Many young people flock to Hollywood in hopes of becoming Hollywood Royalty, many nev… 8 prototypes for a Trump border wall have been built. @jacobsoboroff shows what they look like now on @NBCNightlyNews.

Trump’s border-wall fantasy is crumbling. In the annals of pathetic climb-downs, this Sunday-morning tweet from President Trump deserves a special place of honor, or perhaps dishonor: “Eventually, but at a later date so we can get started early, Mexico will be paying, in some form, for the badly needed border wall.” 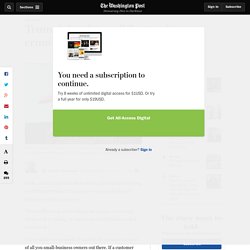 To put those weasel words in context, let me ask a question of all you small-business owners out there. If a customer brings some merchandise to the cash register and promises that one of his neighbors will pay you for it “eventually . . . at a later date . . . in some form,” what are your odds of ever seeing that money? How likely is it that “in some form” means cash? Do you let him walk out with the goods, or do you remind him you weren’t born yesterday? Opinions Orlando Shooting Updates News and analysis on the deadliest mass shooting in U.S. history.

Border Post: Seeing Boundaries from Space – Planet Stories – Medium. In some instances, three borders come together at a single spot called a tripoint. 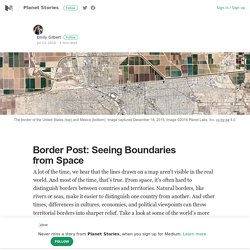 One tripoint, Tres Fronteras, lies deep in the Amazon rainforest and is where Brazil, Columbia, and Peru meet. The similarly named, Triple Frontier, joins Argentina, Brazil, and Paraguay. In the first image, Peru lies to the west of the river, Brazil to the east, and a small sliver of Colombia extends down from the top center. In the second image, the left part of the frame is Paraguay, the top right is Brazil, and the bottom right below the river is Argentina.

While there are no international boundaries between four nations in a single spot, there are plenty of instances where four states or territories come together at a single location or quadripoint. Look closely and you’ll see the Four Corners Monument in red. Today in 1848 the US and Mexico signed a treaty which transferred huge swathes of land (including California) to the USA. A short history of US immigration. Read more. What would a wall between the US and Mexico mean for jobs and trade? Nation of immigrants. Great 3D map showing migration into the USA. Other countries are available. #geographyteacher. *****The areas where Trump’s wall would be built voted heavily against Trump. A family looks toward metal bars marking the United States border where it meets the Pacific Ocean in Tijuana, Mexico. 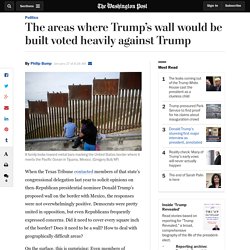 (Gregory Bull/AP) When the Texas Tribune contacted members of that state’s congressional delegation last year to solicit opinions on then-Republican presidential nominee Donald Trump’s proposed wall on the border with Mexico, the responses were not overwhelmingly positive. Democrats were pretty united in opposition, but even Republicans frequently expressed concerns. ***A fugitive being dragged by border patrol across the USA border. Visualizing the U.S.-Mexico Border. What does the southern border of the United States look like? For all the talk of “securing the border” and “building a wall,” there is surprisingly little visual material that conveys just how vast this stretch of space is. In total, the U.S. -Mexico border spans 1,954 miles. According to Google Maps, it would take 34 hours to drive its entire length. Mexico to USA Migration Case Study Resource. Futuristic city blurs the U.S.-Mexico border.

One of Mexico’s most famous architects is taking a conceptual approach to border development, imagining a future much different than Donald Trump’s dystopian walled-off border ghetto. Fernando Romero, who has led some of his country’s most ambitious urban mega-projects in recent years, including Mexico City’s new international airport, is now setting his sights on the border region where he’s drawn plans to build the world’s first binational metropolis.

His latest project, simply titled “Border City,” is a proof-of-concept for a more than 3-billion square foot city that would literally straddle the U.S. -Mexico border in a way that would revolutionize and integrate community dynamics between both nations. The Mexican architect insists the project is feasible and will become reality someday. “We’ve considered several locations to physically shape the Border City concept,” Romero told Fusion in an email. Screenshot Google Maps.