"Dreaming of a red #Christmas: Festive features spotted near Mars south pole" The first ever colour image taken on the surface of Mars, by Viking 1 lander on July 21, 1976. Credit: NASA/JPL.

Mars craters. Mars like Earth. Mars rover. Water and rivers on Mars. Mars animations. Mars moons. A flight over a vast field of icy ripples near Mars' North Pole. A bright red impact crater marks the landscape, reminiscent of a recent Star Wars battle. You won't see any footprints or AT-AT tracks in the ice here, though. Created with @HiRISE data. Mars dust devils. Cassiopeia sur Twitter : "Mars with Deimos and Phobos. Phobos is the larger of the two moons. It is likely that the both moons were captured by Mars. Phobos is approaching Mars more and more and will probably sometime fall to its surface. Or break and may. Amazing simulation of a Marsquake from InSight data. . Credits NASA/JPL-Caltech/ETH Zurich/Van Driel.… 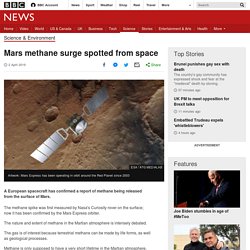 The methane spike was first measured by Nasa's Curiosity rover on the surface; now it has been confirmed by the Mars Express orbiter. The nature and extent of methane in the Martian atmosphere is intensely debated. The gas is of interest because terrestrial methane can be made by life forms, as well as geological processes. Methane is only supposed to have a very short lifetime in the Martian atmosphere, so detecting it there means it must have been released very recently. *****Martian eclipse by Phobos: If you take the 9 frames roughly in the middle and animate them - you get this.... the bit of each file name before EDR is the time in seconds - so these are about 8 seconds apart....80 or so seconds in this gif.

I’ve released the slack in my cable so it won’t flutter as much in the wind and pull on the seismometer. Keeping it still will help as I listen for #marsquakes.… Good morning. Here is a beautiful sunrise on Mars. (Image credit: NASA/JPL)… Following @MarsCuriosity - An awesome video composed in Blender from 41 Navcam images by Rob Haarsma [full video. We're returning to the Moon, preparing to go beyond to Mars. We are going. We are NASA.… New Cameras on Mars! The flow of raw images sent from Mars, straight to the Web, has begun. Now that NASA's InSight is on Mars, what's it going to do? See for yourself with your smartphone (this is a lot of fun on desktop, too) #MarsLanding. Twitter. Fun space fact: There is a volcano on #Mars, called Olympus Mons, that is the size of #France. It's the largest known volcano in the Solar System. Source. Ancient Mars could have supported sub-surface biosphere. It’s now accepted that Mars once was a warmer, wetter world, with organic compounds and liquid water on its surface. 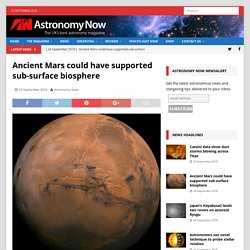 New research shows the red planet also could have supported microorganisms below the surface for hundreds of millions of years. “We showed, based on basic physics and chemistry calculations, that the ancient Martian subsurface likely had enough dissolved hydrogen to power a global subsurface biosphere,” said Jesse Tarnas, a Brown University graduate student and lead author of a study in Earth and Planetary Science Letters. “Conditions in this habitable zone would have been similar to places on Earth where underground life exists.” On Earth, microorganisms in subsurface lithotrophic microbial ecosystems – SLiMEs – can thrive in the absence of sunlight by stripping electrons off dissolved molecular hydrogen. “The question then becomes: What was the nature of that subsurface life, if it existed, and where did it get its energy?” *****360 interactive of Mars: Curiosity Surveys a Mystery Under Dusty Skies.

This 360-degree panorama was taken on Aug. 9 by NASA's Curiosity rover at its location on Vera Rubin Ridge. 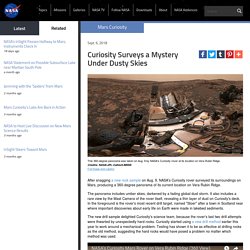 *****Kaiser Crater, Mars. Highest quality @HiRISE video 4k. These are holes in a rock on Mars that humans shot with a laser on a robot TODAY.… Big underground lake discovered on Mars. Super cool animation shows a dust devil being formed on Mars. Had never seen something like that before.… Brian Cox sur Twitter : "Spending day writing about Mars - the place is a genuine mystery. Put simply, nobody would have been surprised if the planet had always been an arid dead world, small and far from the Sun. But it once had rivers and seas, possibly. Giovanni Schiaparelli was the first to map Mars in detail. He wrote about the planet's 'canali,' which was misleadingly translated into English as "channels" (rather than "canals. Can you guess what planet this globe depicts? @AGSLib… Theconversation. The search for life on Mars has taken a step forward with the NASA Curiosity rover’s discovery of organic matter on the bottom of what was once a lake. 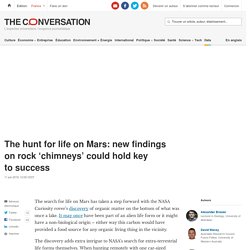 It may once have been part of an alien life form or it might have a non-biological origin – either way this carbon would have provided a food source for any organic living thing in the vicinity. The discovery adds extra intrigue to NASA’s search for extra-terrestrial life forms themselves. When hunting remotely with one car-sized machine, the question is where best to focus your efforts. It makes sense to look for the same types of places we expect to find fossilised microorganisms on Earth. This is complicated by the fact that these fossils are measured in microns – mere millionths of a metre. The Curiosity rover looks for certain sedimentary rocks deposited near water, as it did for the latest discovery. Mono Lake Before our visit, geologists were essentially divided about these chimneys. We went to Mono Lake to find out who was right. In 1949, the rocket pioneer Wernher von Braun wrote a novel about a manned mission to Mars, in which the leader of the Martian government is called ‘Elon’.

Mars is beautiful in the early morning light. Snow on the dunes. (photo from the amazing folks @NASAJPL)… Photo from Mars @MarsRovers held up to outcrop of redbeds and gypsum of Permian Nippewalla Group in Kansas.… We've learned a little bit more about Mars since this was made.… Are there earthquakes on Mars? Or rather, "marsquakes? 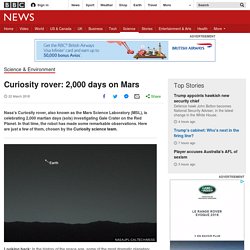 In that time, the robot has made some remarkable observations. Here are just a few of them, chosen by the Curiosity science team. Image copyright NASA/JPL-Caltech/MSSS Looking back: In the history of the space age, some of the most dramatic planetary images ever taken have been of Earth, but photographed looking back from deep space. Great view of Martian topography, showing the intriguing ‘global dichotomy’ - the northern hemisphere is on average over 5km lower than the south. There are also some very big volcanoes :-)…

NASA sur Twitter : "Tiny, crystal-shaped bumps seen in fine-layered bedrock of this Martian ridge are being inspected by our @MarsCuriosity rover. These bumps could explain an important transition in the planet’s history. Are they remnants of an evaporate. This image of Mars taken by the Mars Reconnaissance Orbiter on Nov 19, 2013, shows a fresh impact crater that appeared on Mars between 2010 and 2012. @HiRISE. *****I am watching a video from Mars on a computer in my hand. Just sayin'… NASA's Curiosity rover captures an incredible panoramic view of Mars from the Gale Crater, showing dunes, buttes and ridges across the Red Planet's surface.

Climate Resource Center - Earth from Mars. This photo from NASA’s Curiosity rover shows the Earth as seen from the surface of Mars, shining brighter than any star in the Martian night sky. 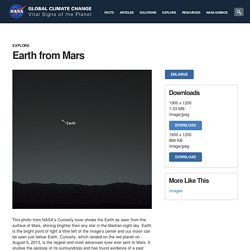 Earth is the bright point of light a little left of the image’s center and our moon can be seen just below Earth. Curiosity, which landed on the red planet on August 6, 2013, is the largest and most advanced rover ever sent to Mars. It studies the geology of its surroundings and has found evidence of a past environment well-suited to support microbial life. Researchers used the left-eye camera of Curiosity's Mast Camera (Mastcam) to capture this scene about 80 minutes after sunset on the 529th Martian day, or sol, of the rover's work on Mars (January 31, 2014). The image has been processed to remove cosmic-ray effects. This picture adds to our collection of photos of planet Earth from afar, giving a unique perspective to our place in the cosmos.

Just outwordly! "@JPMajor: View from NASA's #Opportunity rover while backing away from the rim of the 800-meter-wide Victoria Crater on Aug.… This major health risk is stopping us travelling to Mars. NASA is dead-set on sending astronauts to Mars within the next 15 to 20 years. 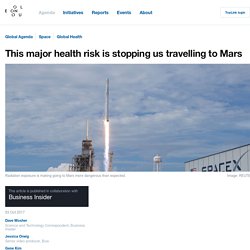 China has said it hopes to send people there between 2020 and 2030, and even Russia is floating plans to put boots on the red planet. Meanwhile, SpaceX founder Elon Musk is trying to cut the cost of spaceflight enough to start establishing a permanent Martian colony of 1 million people as soon as possible. But if a study of radiation exposure in mice has any bearing on humans, going to Mars may be much more dangerous than anyone expected. The root problem is cosmic rays, as detailed in a May 2017 Nature study and highlighted by a recent Business Insider video. The Danger of Cosmic Rays Cosmic rays are high-energy atomic and subatomic particles that get blasted out from exploding stars, black holes, and other powerful sources in space. Researchers know that astronauts receive much higher radiation exposure than those of us who remain on Earth, since the planet’s atmosphere absorbs a lot of that harmful energy.