Twitter. Matt Henderson sur Twitter : "we can model a lightning strike by finding the shortest path in a random maze, from a point at the top to the ground. To find the path, we send out a frontier through the maze, and trace it back once it reaches the ground… ht. NOAA Satellites sur Twitter : "Just in: Here's imagery from #GOES16 of Invest 90L, a system that's been brewing near the Bahamas over the last 24 hours. It combines #GeoColor and the Geostationary Lightning Mapper (#GLM). More imagery. Christophe Suarez sur Twitter : "Voici une image particulière, réalisée en 2017, en Savoie. La foudre tombe sur un arbre, près d'une clôture électrique, ce qui suscite un effet couronne marqué. @PGraines #orage #orages #foudre #StormHour #lightning… https.

St Elmo's Fire. We never really cover #lightning ... such a shame ... such a shame as I would love this video as a starter next year some how #geography #geographyteacher #scienceteacher #weather. Ground-to-cloud lightning fills the sky over Burleigh Heads, Australia, in an awesome display of the power of nature. Credit: Hayden Milne. Mike Olbinski sur Twitter : "As we were shooting east towards the sunset, a storm built up essentially on top of us and a loud blast of thunder freaked us out. I turned my camera that way and a second bolt dropped less than a mile away. #azwx #stormhour… This luminous plasma discharge is a weather phenomenon known as St. Elmo's fire. ⚡️ Lightning strikes near a plane at Christchurch Airport, New Zealand today.⚡️… Neither a map nor data, just a crazy moment in nature! The exact moment lightning strikes water. Source. ITV News sur Twitter : "This is the moment a man was struck by lightning while walking his three dogs causing him to collapse and fall flat on his face. Luckily he was rescued by the swift actions of two bystanders.

Paul Smith sur Twitter : "Sprite lightning 8/19 Ok. I sure hope we uncover all the secrets of these marvels of nature in my lifetime.. Until then , I will just keep trying to shoot as many as I can. Maybe one day something I capture will help in better fi. Lightning strike next to the road in Hong Kong □ MenClub AUTO… EO On This Day: Red Sprites Above the U.S. and Central America Within three minutes, astronauts acquired two photographs of elusive red sprite emissions above thunderstorms in 2015. #NASAEO20 #EarthDayEveryDay. Poland lightning strike 'kills several' in Tatra mountains storm. Image copyright EPA At least four people died and more than 100 were injured in lightning strikes during a thunderstorm in Poland, Prime Minister Mateusz Morawiecki says. 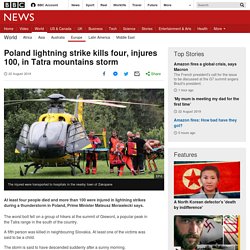 The worst bolt fell on a group of hikers at the summit of Giewont, a popular peak in the Tatra range in the south of the country. A fifth person was killed in neighbouring Slovakia. At least one of the victims was said to be a child. The storm is said to have descended suddenly after a sunny morning. "Nobody expected such a sudden storm to break out and from our human point of view it was something which was impossible to predict," Mr Morawiecki said an emergency meeting in the region. There were reports of casualties in different parts of the mountain range.

What should you do during thunder and lightning? The worst incident occurred on Thursday at the top of the 1,894m (6,214ft) Giewont mountain, where a metal cross is sited. "We heard that after (the) lightning struck, people fell. *****Ed Piotrowski: MUST-SEE VIDEO! Romulus McNeill was walking out of the Academy for Technology and Academics located near Conway and was struck by lightning! As you would imagine, it freaked him out. Thankfully, he's ok! (After one take at nor.

Spectacular slow motion video of lightning on July 28th by Jonas Piontek Photography!… *****How thunderstorms form: Tomasz Schafernaker explains (incl cumulonimbus, thunder and lightning) Here's an interesting graphic. A map of the UK and where it is most likely to see #thunderstorms during the year. Data Source: @metoffice. Map: @esriuk. #UKWeather. *****Knackered this morning (along with half the country I expect) after last night’s heat and pyrotechnics. Here’s how the thunderstorms moved north during the night. Revealed by detected lightning strikes. Via @Blitzortung_Org… htt.

Slow-motion video of lightning bolt in France on Jun 19th. Thanks to Brice Volo for the report! ⚡️⚡️⚡️An amazing time lapse video of the lightning last night, looking out to sea from Brighton seafront.⚡️⚡️⚡️ Video: @Love_Brighton / @deckchairhq… Some of the rarest lightning in the world to capture .. on a cell phone?..… Severe-weather.EU sur Twitter : "Spectacular red sprites captured from the International space station and identified in photos by Frankie Lucena! These were captured on May 10th. Also note the orange sodium and green oxygen natural airglow.…

Such an unlucky walker. #BenNevis #Scotland. *****Thats a close call - lucky dude !… Scary scene during the weather delay at the #USWomensOpen. Players and fans are safe, and play is about to resume.… If you need a reminder why you shouldn't shelter under a tree during a thunderstorm... □⚡️□ Spectacular (!!) upward lightning captured in Cyprus on April 19! Video: Stefanos Mistrellides via Meteo Reporter Storm… Awesome 7200+ FPS Lightning… Woah! Lightning on the plane, BANG.... #severeweather #extremeweather #Lightning… One of the most striking pictures of red sprites: captured by Doug Parker over Costa Rica in April 2017. Espectacular rayo a los pies de los Montes de #Málaga esta mañana. Vídeo: @vayamananacstv… An oak tree that was struck by lightning and split into three. (Image: David P Howard)… Some of your shots of the #thunderstorms last night. Wainfleet in Lincolnshire saw 68.4mm of rain in the 24 hours up to 4am this morning and reported a gust of 60mph.… WEATHER/ METEO WORLD sur Twitter : "Here those #LightningStrikes from yesterday. What a busy day thank you for all your reports.. large hail, downbursts and lightning all sent to me! #severeweather #ExtremeWeather #ukweather via: @Blitzortung_Org.

WOW!!! Over a huge 215,000 #lightning strikes have been detected over and around the U.K. in the period from 7am Friday to 7am Saturday. What a blip in the #Heatwave #severeweather #ukweather… WOW... Gorgeous image of #redsprites #Lightning from Arizona, USA early this morning 18th July... brilliant capture by @SirlinJohn thank you. #severeweather #StormHour #extremeweather… Simon Kuestenmacher sur Twitter : "#Map shows that #lightning follows shipping lanes: As it turns out particles in ship exhaust increase the likelihood and intensity of thunderstorms. Really cool fact that I had never considered! Source.

Love this and had to share it. Beautiful #Fireworks with #lightning over Abilene, Texas, USA last night 23/24th June. Thanks to @RealTateEllison #severeweather #extremeweather. This map shows lightning strikes over 4 days. It's over 60,000 points, animated and it's in the browser. The power of WebGL!… Thames Barrier Alan sur Twitter : "My #ThamesBarrier dayshift is coming to an end as #thunderstorms are forming nearby. I'm handing over to Danny who captured the amazing #lightning yesterday evening. Looking like a similar show ahead in #London tonight!… Liam Dutton - Weatherman sur Twitter : "If you were in S’ern England yesterday and wondering why you could see a storm cloud and lightning but had no rain or thunder, it’s because it was over Buckinghamshire. It reached so high - 40,000ft/7.5 miles up - t.

And another amazing #lightning display from this #Cumulonimbus to the northwest of London seen from Ealing. (Mix of real-time and time-lapse)… Frequent within cloud lightning over London.… Flying alongside the cell over Gatwick at 30,000 feet - a very active CB!… In pictures: 'Spectacular' lightning strikes parts of UK. Image copyright Reuters Thunderstorms and torrential rain are sweeping across parts of southern Britain, with frequent lightning flashing across the sky. 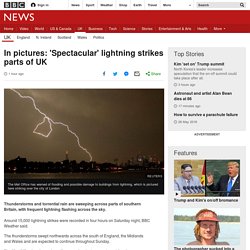 Around 15,000 lightning strikes were recorded in four hours on Saturday night, BBC Weather said. The thunderstorms swept northwards across the south of England, the Midlands and Wales and are expected to continue throughout Sunday. The Met Office has issued a yellow warning for heavy rain and flooding. Many people got out their cameras to photograph and video the electrical storm, which was called "utterly insane" and "like being under a strobe light". Image copyright PA/TowerRNLI Image copyright Ems - Hayling Island/@auntymems Others remarked that they had "never seen a storm quite like this" and said the flashes were "stunning". Another woman remarked it was "like a rave outside". Image copyright Andrew Lanxon Hoyle/@Batteryhq Image copyright Kate/@tearscrynomore "Oh boy!

Image copyright Paul Greenford tyres/@Atko80 Image copyright J/@dxtjxsh. NOAA Satellites sur Twitter : "If you saw #lightning yesterday, you were not alone. NOAA's #GOESEast (GOES-16) monitored major storm activity across the United States. The satellite will soon share this critical duty with her partner in orbit, GOES-17 'Fi. Lightning crackles over the Severn Bridge on Saturday. More of your striking shots.

One of the most striking pictures of red sprites: captured by Doug Parker over Costa Rica in April 2017. NOAA Satellites sur Twitter : "Happy #FridayThe13th! In the mood for something weird and wonderful? Check out this #GOESEast imagery of SPIDER □ LIGHTNING ⚡️captured by the Geostationary Lightning Mapper! Learn more about the frightening phenomenon of str. Hunting mystery giant lightning from space. Image copyright ESA/NASA Thunderstorms are some of the most spectacular events in nature, yet what we can see from the surface of our planet is only the beginning. 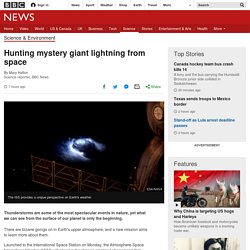 Lightning captured by camera on Roadster. That's awesome.… A THUNDERPLUMP is a heavy or stormy fall of rain.… Spectacular view of a thunderstorm from cruising altitude by pilot Santiago Borja. Exceptional!… What is thundersnow? One from 2017. #Lightning strike terrifyingly close to a boy in #Argentina. A reminder of to be wary of storms like this. Watch until the en…

Fewest number of lightning fatalities on record in the U.S. in 2017. We've roughly halved the average number every two decades. NWS lightnin… Lightning vs Pole. #Map shows that #lightning follows shipping lanes: As it turns out particles in ship exhaust increase the likelihood and intensity of thunde… Extraordinary findings @PeterGWeather. *****Ships are triggering intense lightning storms. Heavily-laden ships carrying trade around the world leave behind a trail of storms and lightning. 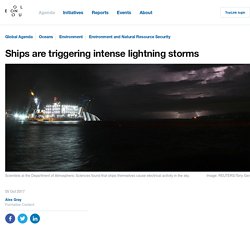 That’s the hypothesis of a team of researchers at the University of Washington, who found that emissions from ships were triggering intense lightning storms. The scientists at the Department of Atmospheric Sciences analyzed data from the World Wide Lightning Location Network (WWLLN) and noticed a certain pattern of lightning strikes across the Indian Ocean. The pattern could not be put down to atmospheric conditions. However, once they compared the lightning strikes with shipping routes an explanation began to emerge: the ships themselves were causing electrical activity in the sky.

Image: Thomton et al/Geophysical Research Letters/AGU “We already know that ships influence cloudiness and clouds,” the study’s lead author Joel A. Using WWLLN data, the team looked at the locations of 1.5 billion lightning strikes from 2005 to 2016 and plotted them against shipping channels across the ocean. Share. Have you ever seen a lightning storm like it. Nothern Saudi Arabia a few months back. Source; @StormchaserUKEU Fb #severeweather… Did you know that #aircraft can produce small discharges as they fly though charged clouds? Here is an example of a flight detected by the…

VIDEO: Moment a lightning bolt strikes feet away in Australia. #Lightning in #Valencia, #Spain earlier on this afternoon. Nice shot there by @JordiVidal1983 #severeweather. #GOES16 #lightning mapper captures huge flash that spread 250 miles over Oklahoma, Kansas & Missouri! Learn more. *****Why you don't go outside in a lightning storm. This is what the Grand Canyon look like when it's lit only by lightning. #Thunderstorm from an aircraft on route to #cancun, #mexico on 17th October. Great capture...via; FB #lightning #severeweather.