Roman v Common Law. Impact of laws. Fear of crime. Crime UK. Risk index. Corruption. Slavery index. Corporal punishment. Gun law. Capital punishment. Prison population. Simon Kuestenmacher sur Twitter : "Where are the deadliest cities on Earth? This #map shows that 84% of them are in #LatinAmerica. Only 3 are outside of the American continent. Read more about the ranking here. 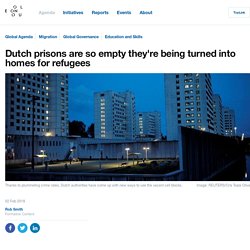 The number of prisoners in the Netherlands fell from 20,463 in 2006 to 10,102 in 2016. This is equal to about 59 prisoners per 100,000 population, according to data from the World Prison Brief. In comparison, the United States, which has the world’s highest incarceration rate, has 666 prisoners per 100,000 population, or a total of more than 2.1 million inmates. The Netherland’s low incarceration rates are largely thanks to relaxed drug laws, a focus on rehabilitation and an electronic ankle monitor system. These measures have resulted in the closure of multiple prisons across the country in recent years, including Bijlmerbajes in Amsterdam, which was shut down in 2016.

Prof.Frank McDonough sur Twitter : "25 February 1982. The European Court of Human Rights ruled that corporal punishment in UK schools was a violation of the Human Rights Convention. It would lead to legislation banning it in UK state schools.… Good Morning America sur Twitter : "ONE LESS: Scott Pappalardo owned his AR-15 rifle for more than 30 years. He even has a Second Amendment tattoo on his arm. This weekend, he destroyed his gun “to make sure this weapon will be ever be able to take a life.

“We are going to be the kids you read about in textbooks. We are going to be the last mass shooting.” This powerful speech on gun control by a student who survived the Florida shooting moved many who heard her to tears.… http. In 2015, Brazil had as many homicides as all the blue countries combined.