We Built this City - London. The Irish In Britain. The lives, opportunities and challenges for the Irish in Britain which remains the main destination for Irish emigrants. 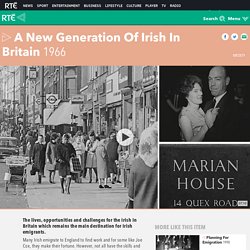 Many Irish emigrate to England to find work and for some like Joe Cox, they make their fortune. However, not all have the skills and many of those that do have the skills end up in the wrong job. Irish in Britain sur Twitter : "Mapping the Irish part 4. Today it's the Merseyside. Unsurprisingly, Liverpool is a nice dark green with 1000s of Irish voters. #GE2019 is nearly upon us, only 5 days to go. Read about other ☘️ areas. Irish in Britain sur Twitter : "Mapping the Irish part 5. For the final part in our series ahead of #GE2019, check out the constituencies for the Irish-born in London. Over 1/4 of the Irish community in Britain lives in the capital. #LondonisGreen Read ab.

Irish in Britain sur Twitter : "New series! Mapping the Irish ☘️ Over the next 5 days leading up to #GE2019 we'll be publishing maps showing the density of the Irish-born population in different parts of Britain. To get us started here’s the West Midlands.