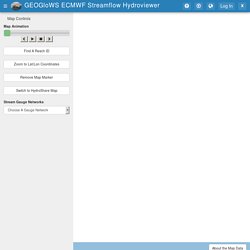 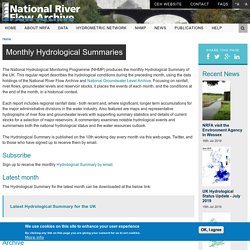 This regular report describes the hydrological conditions during the preceding month, using the data holdings of the National River Flow Archive and National Groundwater Level Archive. Focusing on rainfall, river flows, groundwater levels and reservoir stocks, it places the events of each month, and the conditions at the end of the month, in a historical context. Each report includes regional rainfall data - both recent and, where significant, longer term accumulations for the major administrative divisions in the water industry. Also featured are maps and representative hydrographs of river flow and groundwater levels with supporting summary statistics and details of current stocks for a selection of major reservoirs.

A commentary examines notable hydrological events and summarises both the national hydrological status and the water resources outlook. Subscribe Latest month Archive. This is 1 of my top 5 web apps from #esri - The Water Balance App. Use it for teaching and learning about Planet Earth! #maps #gis… Changes in discharge for selected rivers in the HKH region. Shifts in the seasonality of flows can have major implications for regional food security, especially when the timing of peak flows and growing seasons do not coincide. 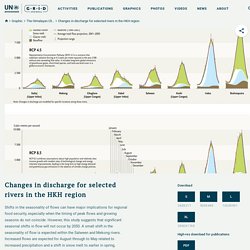 However, this study suggests that significant seasonal shifts in flow will not occur by 2050. A small shift in the seasonality of flow is expected within the Salween and Mekong rivers. Increased flows are expected for August through to May related to increased precipitation and a shift in snow melt to earlier in spring, whereas decreased flows are expected in June and July. The snow melt peak will decrease in magnitude because more liquid precipitation (rain) will fall in response to increased temperatures. Water Balance App. About this App This app is based on data from NASA’s Global Land Data Assimilation System (GLDAS-2.1), which uses weather observations like temperature, humidity, and rainfall to run the Noah land surface model. This model estimates how much of the rain becomes runoff, how much evaporates, and how much infiltrates into the soil.

These output variables, calculated every three hours, are aggregated into monthly averages, giving us a record of the hydrologic cycle going all the way back to January 2000. Soil moisture plus snowpack is the water storage at any given place. Every month that storage volume changes according to the water flux - recharge occurs when precipitation is high, depletion occurs when evapotranspiration and runoff are higher. Did you know drought orders can be used to protect rivers when there is "Such a deficiency in the flow", it poses "a serious threat to any of the flora or fauna which are dependent on those waters.

StoryMaps. COSMOS-UK. *****River regime change: An interesting hydrograph from the report show that snow melt fed rivers (characteristic of Canada) are forecast to have smaller but earlier Spring peaks, high winter flows and lower summer flows.… Jess Neumann sur Twitter : ".@imprex_eu Risk Outlook aims to help inform water sector decision-makers about potential upcoming extreme hydrological events in Europe... we asked UK stakeholders what they thought was important to know. *****Lag times after Hurricane Florence. Hydrological Summary July 2018. *****#Map sizes rivers in #USA according to the amount of average annual flow. Source. Hydrological Situation Update December 2017. Explore Climate Trends with the Water Balance App. Most discussion of climate change has focused on temperature or sea level rise, but changes in freshwater availability will be an even larger challenge in many regions of the world. 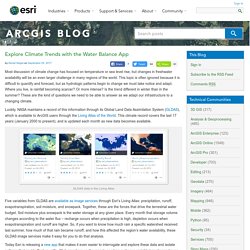 A river's meanderiness [Stølum number] is the length traveled by water divided by the direct distance. *****The Storm Hydrograph Revision and Exam Technique. So, I spent about 40 hours (seriously, it took me HOURS) making a video tutorial to help my AS class after they almost all failed some homework questions on the storm hydrograph. 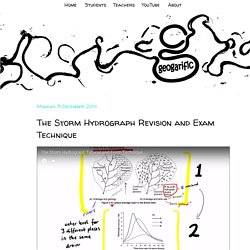 This bus image from Coverack certainly demonstrates something very Hjulström #flashfloods #Cornwall. We've made available 53 million water quality samples - updated daily. It's an alpha so pls tell us what you think. Open WIMS data. *****When you mix water with science. *****Search for gauging stations. Skip to main content #ICYMI Read our recent newsletter for details of what has been happening over the last few months! 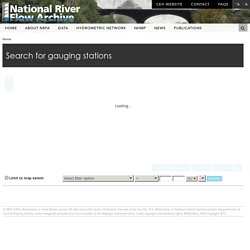 — 4 days 4 hours ago 41 years ago during the 1975-76 drought 41027 - Rother at Princes Marsh experienced it's lowest flow @EnvAgencySE… — 5 days 8 hours ago RT @CEHScienceNews: The UK #Drought Portal: near real-time updates to help explore and map meteorological drought status… — 5 days 10 hours ago. *****GaugeMap. @naomiandersson @BIFoRUoB Used to add a litre of water to a plastic bottle with its bottom cut off and set in the soil... gave a rough guide and could be replicated. 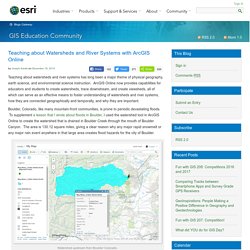 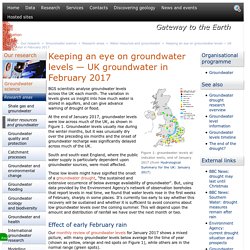 The variation in levels gives us insight into how much water is stored in aquifers, and can give advance warning of drought or flood. At the end of January 2017, groundwater levels were low across much of the UK, as shown in Figure 1. Groundwater levels usually rise during the winter months, but it was unusually dry over the preceding six months and the onset of groundwater recharge was significantly delayed across much of the UK. South and south-east England, where the public water supply is particularly dependent upon groundwater sources, were most affected. These low levels might have signified the onset of a groundwater drought, "the sustained and extensive occurrence of below average availability of groundwater". Effect of early February rain. Just launched: Near-real-time Rainfall API. To complement our (the Environment Agency’s) publication of open data on river levels, we have now made near real-time rainfall data available via an API. 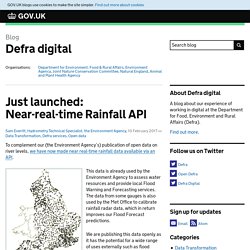 This data is already used by the Environment Agency to assess water resources and provide local Flood Warning and Forecasting services. The data from some gauges is also used by the Met Office to calibrate rainfall radar data, which in return improves our Flood Forecast predictions. We are publishing this data openly as it has the potential for a wide range of uses externally such as flood forecasting, farming, and recreation.

Why do the Environment Agency have their own rainfall network? We are required to provide flood warning and water resource assessment at a much higher resolution than the Met Office rain gauge network is currently capable of. First map of Earth’s hidden groundwater reserves shows we’re using them too quickly. An international team of hydrologists has come up with the best estimate yet for Earth’s total supply of groundwater, saying that nearly 23 million cubic kilometres of groundwater is contained in hidden reserves under the surface of the planet. 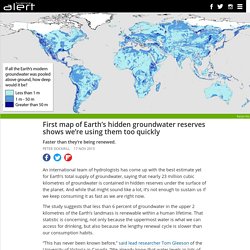 And while that might sound like a lot, it’s not enough to sustain us if we keep consuming it as fast as we are right now. The study suggests that less than 6 percent of groundwater in the upper 2 kilometres of the Earth’s landmass is renewable within a human lifetime. Realtime Stream Gauges. Log In. Rivers meander. Lakes grow and shrink. Engineers build dams and farmers flood fields. In the 30-year animation* above, Bangladesh's Brahmaputra River sweeps unpredictably across the landscape. ***Hurricane Matthew impact on hydrographs on eastern seaboard. Hurricane Matthew's Water Footprint Data Sources Streamflow: U.S. Geological Survey National Water Information System ( Time series of discharge at selected gages within ~200 km of the eye of the storm are shown through time, ordered by latitude and normalized to site-specific maximum discharge observed over the duration of the hurricane.