Subscribe to read. World's First Large Size Commercial Hydrogen Carrier To Be Developed By HHI, Hyundai Glovis, Liberian Registry And KR. ‘Green hydrogen’ from renewables could become cheapest ‘transformative fuel’ within a decade. “Green hydrogen” made with wind and solar electricity could become the cheapest form of what the Australian government has described as a “transformative fuel” much faster than expected, analysts believe. 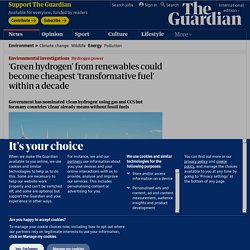 Chinese manufacturers have reported making systems to create hydrogen with renewable energy for up to 80% less than official Australian estimates from just two years ago. Energy analysts said it suggested green hydrogen was likely to leapfrog hydrogen made with gas and coal as the most cost-effective form of the energy before the end of the decade, and by the time an industry could be developed at scale. The government has nominated “clean hydrogen” as a priority low-emissions technology that could eventually help replace fossil fuels in transport, electricity and in industrial processes as the world moves to cut greenhouse gas emissions. But it has not defined what “clean hydrogen” would mean in terms of emissions. Herne Bay should soon have the first hydrogen manufacturing plant in the southeast - exciting times! Hear more in my update on the work of our climate change group - aiming for #NetZero by 2030 □… Theconversation. Let us start, in the spirit of steampunk, by imagining a new and different past. 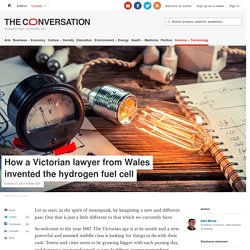 One that is just a little different to that which we currently have. So welcome to the year 1867. The Victorian age is at its zenith and a new, powerful and monied middle class is looking for things to do with their cash. Towns and cities seem to be growing bigger with each passing day, and horizons are transformed as new buildings appear everywhere. One aspect of the urban landscape never changes though. In both this imagined and the real past, the gas battery was invented in 1842 by a young Welshman from the then town of Swansea, William Robert Grove.

However in this timeline, unlike our own, within 20 years the Welsh man of science’s amazing invention had ushered in a new industrial and cultural revolution. Our imagined scene is the British Empire’s new electrical age. Of course, none of this actually happened. A curious voltaic pile Economical batteries Born of necessity. 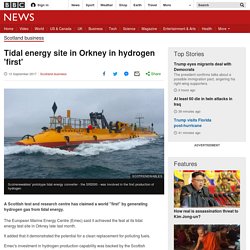 The European Marine Energy Centre (Emec) said it achieved the feat at its tidal energy test site in Orkney late last month. *****Solar fuels could be Australia’s biggest energy export #hydrogen #cleantech. Norway races Australia to fulfill Japan's hydrogen society dream. OSLO/MELBOURNE/TOKYO Norway and Australia are racing each other to show they can supply Japan with hydrogen, hoping to fulfill its ambition to become the first nation significantly fueled by the super-clean energy source. 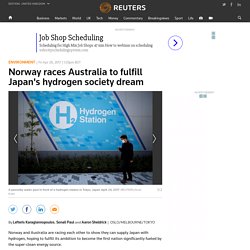 While Australia has planned to derive liquid hydrogen from brown coal for some time, Norway could steal a march if a pilot project producing the fuel using renewable energy - a climate-friendly method more in keeping with Japan's aims - is cheaper. Japan is betting heavily on becoming a "hydrogen society" despite the high costs and technical difficulties which have generally slowed its adoption as a carbon-free fuel.

Prime Minister Shinzo Abe is pushing his vision of vehicles, houses and power stations using hydrogen to end Japan's energy crisis since the 2011 Fukushima disaster, which led to a dramatic drop in electricity production from its nuclear plants. KHI has been looking at using brown coal from the Australian state of Victoria, where supplies are plentiful. *****How Australia can use hydrogen to export its solar power around the world. Nearly a century ago, British scientist JB Haldane saw an energy future in which wind power would be used to generate hydrogen; a fuel he described as, weight-for-weight, the most efficient known method of storing energy. 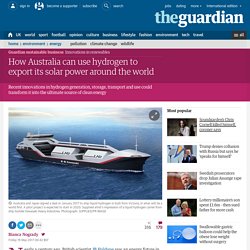 He thought this future was four hundred years away, but the so-called “hydrogen economy” may arrive a lot sooner thanks to a recent burst of innovations in hydrogen generation, storage, transport and use. And it could open a new energy export market for Australia. Hydrogen itself isn’t actually a fuel – it’s an energy carrier. The gas is produced by splitting water molecules into hydrogen and oxygen by the electricity-driven process electrolysis. That hydrogen is then condensed under pressure and at very low temperatures into a liquid, which can be used in much the same way as petrol and diesel, or it can be used in fuel cells to generate electricity. Hydrogen’s greatest asset is its potential to be the ultimate source of clean energy.