*****Mass Movement + deposition on Holderness. The torn edge of Holderness #yorkshire… Coastal erosion over time e.g. #Holderness peninsula. Use @Digimap4Schools if access or use georeferenced 3D @natlibscotmaps (see below) Communities lost to erosion in Holderness #Yorkshire. The incomparable Spurn Point #Yorkshire @YorksWildlife @HumberLifeboat… Increased rates of erosion along the Holderness Coast put properties at immediate risk #geographyteacher. These shocking photos show the extent of clifftop erosion at Skipsea on the Yorkshire coast. Residents of Skipsea have accepted the inevitable - their homes will fall into the sea. 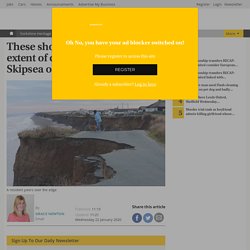 Skipsea's soft clay cliffs are the fastest-eroding coastline in northern Europe, and since last March 10 metres of land has vanished. Gardens, fences and walls regularly fall off the edge, and several roads are now so unsafe that they have been permanently closed. Meet the Skipsea residents living on the edgeIt's thought that 24 homes are at immediate risk, and East Riding Council has called for government funding to help those affected. These shocking images by Press Association photographer Owen Humphreys shows the extent of the erosion. On Green Lane, residents claim that around 3ft of the cliff vanishes every month, and they are now used to checking their garden fences every morning. Skipsea will not be the only settlement between Bridlington and Hull to have been lost to the sea - villages such as Out Newton, Dimlington, Monkwike and Ringborough disappeared long ago. Quintin Lake sur Twitter : "✔️ 3x empty camera batteries ✔️ 4x empty drone batteries ✔️ 1x empty food bag ✔️ 1x empty gas canister ✔️ 2x empty powerbanks ✔️ 2x empty water bottles ✔️ 8x full SD cards I've reached Hull after leaving Newcastle on New Year’s.

Last light over the Humber #Hull #Yorkshire… Excellent resource for teaching about Holderness for A level Geog Coastal landscapes #geographyteacher. The Holderness Coast is the most rapidly eroding coastline in Europe. Find out more about this case study #geographyteacher. Clifftop homes and road in Yorkshire threatened by coastal erosion saved by £3 million grant from Europe. Dozens of homes and a key coastal road in Withernsea which are threatened by coastal erosion have been thrown a lifeline by a £3 million grant from Europe. 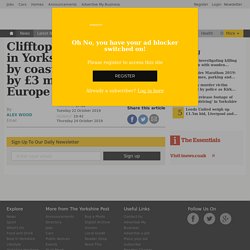 Campaigners are celebrating after hearing that their "11th bid at the 12th hour" for money from European Regional Development Fund towards the £5.5 million scheme had been approved. It should save hundreds of chalets as well as Newsham Gardens, a cul de sac to the west of Holmpton Road, and spare emergency vehicles travelling south and residents a long detour inland.

Ward councillor Dave Tucker said: "I'm shaking with excitement. "We've lobbied Ministers, MPs, we've done everything we can. This is the 11th bid put in for this money and it has come in at the 12th hour. "This £3m will secure the long term economy and the safety of south Withernsea. "If we'd lost that, it would be catastrophic. Holderness coast: Major cliff landslides 'every six years' Image copyright British Geological Survey Major landslides occur on the cliffs of East Yorkshire - some of the fastest eroding in Europe - every six to seven years, a study has concluded. 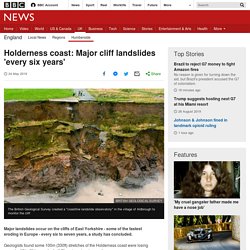 Geologists found some 100m (330ft) stretches of the Holderness coast were losing enough cliff to fill two-and-a-half Olympic swimming pools a year. The 18-year study was carried out by the British Geological Survey (BGS). Researchers said it could help to forecast how landslides would respond to climate change predictions. A team created the BGS's first "coastline landslide observatory" in Aldbrough in 2001, with laser scans, GPS and drone photography later used to generate 3D models of the cliffs. Six 20m (66ft) boreholes were drilled at differing distances away from the cliff to monitor groundwater pressure and physical movements, with weather data also collected offshore. Latest news and stories from Yorkshire Storm frequency and wave energy were also contributing factors. Erosion on the Holderness Coast - Residents' shock as 50m crack suddenly appears metres from homes. 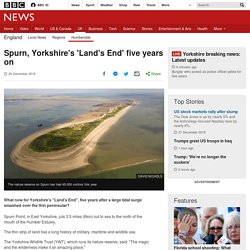 Internetgeography.net □ sur Twitter : "New Hornsea 360° gallery just uploaded. View the impact of coastal defences at Hornsea on the cliffs to the south of the town. Looks great on an interactive whiteboard. #geographyteacher… http. Hornsea - Internet Geography. Location of Hornsea Hornsea is a small coastal town located between Bridlington and Withernsea along the Holderness Coast. 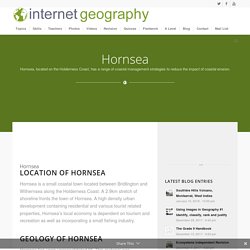 A 2.9km stretch of shoreline fronts the town of Hornsea. A high density urban development containing residential and various tourist related properties, Hornsea’s local economy is dependent on tourism and recreation as well as incorporating a small fishing industry. Geology of Hornsea Hornsea lies upon unconsolidated till. Coastal Features at Hornsea The groynes on Hornsea beach ensure wide and relatively steep beaches. The Holderness Coast - living with coastal erosion. Land quality and coastal management What is the relationship between land quality and the approach taken to manage its erosion? 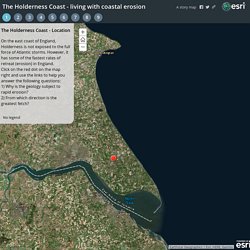