31 July 2020. Australian climate scientist Tim Flannery: Australia Dec 2019. This is a pretty horrifying statistic - although it doesn't go back far enough to show the 18000 killed in the tsunami in 2011 - so not strictly speaking representative.… Heatwaves June/July 2019. Keeping cool. BBC News - UK weather: The UK's record-breaking heat in maps and charts. Do Brits need to toughen up in a heatwave? Image copyright Getty Images Why do Britons find it so hard to cope in a heatwave? 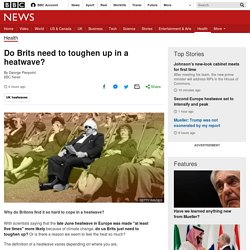 With scientists saying that the late June heatwave in Europe was made "at least five times" more likely because of climate change, do us Brits just need to toughen up? Or is there a reason we seem to feel the heat so much? The definition of a heatwave varies depending on where you are. The World Meteorological Organization defines it as "a period of more than five consecutive days where the daily maximum temperature exceeds the average maximum temperature by 5C or more". So, while five days of 30C or more is a heatwave in the UK, in India temperatures may have to climb to a sweltering 40C to earn the same title. Nigel Taylor, a former associate professor at Australia's University of Wollongong, says the human body is very good at adapting to changing temperatures, because we have to keep our bodies within a 4C range to prevent hypothermia and hyperthermia.

The number of #heatwaves in #France has doubled in the past 34 years and is expected to double again by 2050, per @meteofrance #ClimateChange… Tomasz Schafernaker sur Twitter : "Is it really February? Today’s weather for many of us was/is indeed sensational...and a record temperature in Wales of 19.1°C. At the same time, is it a warning of what’s to come in a future climate? Be careful what you. Simon King sur Twitter : "Meteorologically speaking we're currently in a #heatwave. Temperatures will have been more than 5 degrees above the average for 5 consecutive days. Feb all time record for Scot and Wales beaten, we'll be close to the NI and Eng r. *****Halfway to boiling: the city at 50C. Imagine a city at 50C (122F). 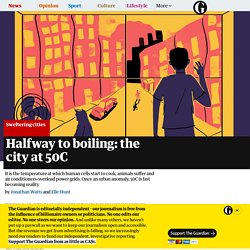 The pavements are empty, the parks quiet, entire neighbourhoods appear uninhabited. Nobody with a choice ventures outside during daylight hours. Only at night do the denizens emerge, HG Wells-style, into the streets – though, in temperatures that high, even darkness no longer provides relief. Uncooled air is treated like effluent: to be flushed as quickly as possible. School playgrounds are silent as pupils shelter inside. Those without the option of sheltering indoors can rely only on shade, or perhaps a water-soaked sheet hung in front of a fan. Asphalt heats up 10-20C higher than the air. Melting asphalt cause road markings to distort in New Delhi Maybe in the beginning, when it was just a hot spell, there was a boom in spending as delighted consumers snapped up sunglasses, bathing suits, BBQs, garden furniture and beer.

The temperature is recalibrating behaviour. A motorcyclist is sprayed with water in Karachi “You could see the physical change. It’s mind-blowing to consider climate change & death due to heatwaves. 2,000 places since 1980 where people died in large #’s from heatwaves mapped. Most vulnerable: old & depressed. Conditions of temperature and humidity (Mor. Exceptional heat across southern Spain today.

*****Heat damage to road: It isn't just the UK that has seen hot weather recently - the heat did this to a road in Belgium yesterday (thanks to @JillPeetersWX) An Anthropogenic Heat Advisory. Cascading impacts of transport disruption in hot weather #Anytown.