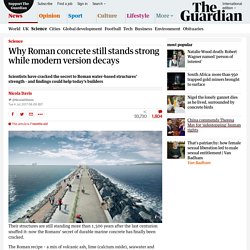 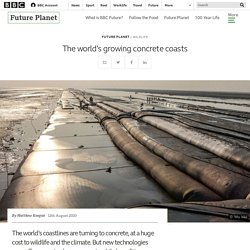 These types of habitat tend to increase in height naturally and they can also retreat further inland as sea level rises to provide constant protection. Going forward, nature-based coastal defences might be the best solution as hard concrete structures in the ocean are likely to encounter increasing problems as a result of climate change. Scientists say we’re going to see more than one metre of sea level rise within the next 80 years, causing traditional coastal defences to fail.

“Building hard concrete structures that don’t naturally adapt to increasing sea level could create an additional problem that periodically those defences will have to be built up or even replaced,” says Rogers. “Whereas nature-based solutions provide you with a solution that essentially self-repairs and keeps up with that sea level rise.”

Today I joined the opening of the excellent Stolford coastal flood scheme in Somerset. The scheme uses new Dutch ‘Hillblock’ tech. These blocks are more effective at absorbing wave energy, reduce the height of the defence and save moving 15000 tonnes of s. Hard engineering approaches to coastal management. Description Course links: GCSE • IGCSE • A-level • IA-level • IB • National 5 • Higher Geography When the natural defences of a coastline are not carefully managed, or when they simply cannot cope to prevent coastal flooding, hard engineering is often necessary to protect towns from the sea. 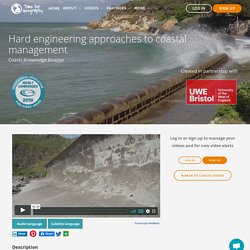 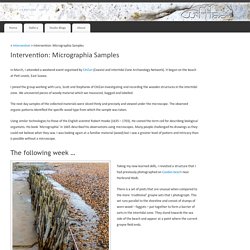 It began on the beach at Pett Levels, East Sussex. I joined the group working with Lara, Scott and Stephanie of CitiZan investigating and recording the wooden structures in the intertidal zone. We uncovered pieces of woody material which we measured, bagged and labelled. Study reveals huge acceleration in erosion of England's white cliffs. The iconic white cliffs of southern England are eroding 10 times faster than they have over the past few thousand years, a new study has revealed. 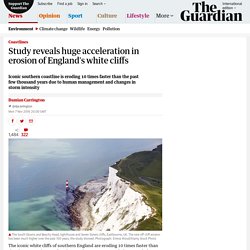 The cause of the huge acceleration is likely to be human management of the coastline, which has stripped some cliffs of their protective beaches, as well as changes in storm intensity. Climate change, which is bringing higher sea levels and fiercer waves, will make the erosion even worse, say scientists. Researchers analysed rocks from Beachy Head and Seaford Head in East Sussex and discovered that the cliff erosion rate over most of the past 7,000 years was just two-six centimetres a year. But the erosion rate over the past 150 years has been much higher at 22-32cm a year. Breakwater, Saltcoats, Ayrshire #Scotland #ukcoastwalk. Planning the @polders of @noordholland anno 1926… #Bexhill groyne 71 the saltwater oxidises the mental, the oxide stains the wood and bonds the metal object to the wood.… #OTD 1968: Tomorrow's World visited the "frost-free" Sea City, 15 miles off the Norfolk coast. The future used to be much more ambitious, didn't it?…

*****Netherlands without polders #Netherlands. EU effect on Blackpool beaches – before and after pictures. *****Groyne Post Portraits. 2008, 2012, 2013, 2014, 2015, 2017. By @clifffart. *****Hard engineering: Concrete Dolosse (interlocking sea defence units) near Colwyn Bay, Conwy. #ukcoastwalk. Are seawalls the best answer to rising sea levels – or is retreat a better option? The extraordinary pictures of subsumed gardens and a swimming pool wrenched from the ground by the giant waves that battered Sydney’s northern beaches last month have revived debate about seawalls and the impact of human attempts to keep the rising ocean from our doors. 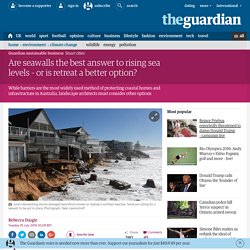 Given their spectacular locations, the homes in the frontline of raging waves are usually valuable property. Attempts to fortify them are met with resistance from ecologists and other beach users, who say the houses should not have been built there in the first place. They object to seawalls because they stop the beach from being a dynamic system, in which wind and waves continually reshape the shore.

Natural processes will usually redeposit much of the lost sand back on to beaches in the weeks after a storm. But where there is a seawall, heightened waves run up the shore and slam against it. But seawalls, like dykes, levees and berms, have been used across the world for centuries to protect homes and other assets. Sea wall / Breakwater, Skinburnessbank, Cumbria. #ukcoastwalk. Seawalls: Ecological effects of coastal armoring in soft sediment environments.