Glasgow and nearby (Changing Places)

Catching the light, woman with cat, the Gorbals, Glasgow 1948 by Bert Hardy. He was a fearless and engaging photographer who could take photos anywhere. This is a particularly poignant image.… Glasgow as it was in 1980 by Raymond Depardon. His photos of the city were considered too bleak to publish at the time.… PHOTO OF THE DAY. Glasgow slum area (1868).… Empress of Britain at John Brown's Shipyard, Clydebank in 1931. Torpedoed by a U-boat in October 1940 and sank. Alexandra Parade, Glasgow. Backlash after Ferguslie Park rated 'most deprived' Residents of a Paisley housing scheme have hit back after official statistics rated it the most deprived community in Scotland. 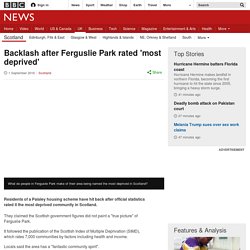 They claimed the Scottish government figures did not paint a "true picture" of Ferguslie Park. It followed the publication of the Scottish Index of Multiple Deprivation (SIMD), which rates 7,000 communities by factors including health and income. Locals said the area has a "fantastic community spirit".

It is the second successive time that Ferguslie Park has featured at the bottom of the official deprivation index, which is published every four years. Parish priest Father Oliver Freney told BBC's radio's Good Morning Scotland programme he was "quite disappointed" by the results. He said: "There are plenty of good people living in Ferguslie and people that do care about the Ferguslie area and put a lot of work into trying to up it. " She now has a "flourishing" career with the NHS - but she still lives in Ferguslie Park. 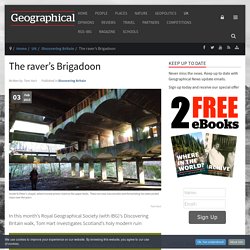 At a dinner party in London about ten years ago, someone said “Hey, you’re Scottish. Have you been to that weird abandoned church?” I’d never heard of it,’ says Paul, an architectural photographer. He’s standing in a concrete shell that was a chapel, and a seminary. For seven centuries, Scottish aristocrats – Napiers and Burns – held the estate, which overlooks the Clyde. A long-forgotten Napier built a tower-house, which is now the estate’s oldest ruin. ‘Look at the brickwork over there.’ Kilmahew’s is an archaeological garden. A doorway in the ruins of Kilmahew Castle. image: Tom Hart Kilmahew’s ruin triple echo is St Peter’s seminary. Two young architects were given the job, Andy Macmillan and Isi Metzstein. Glasgow in 1980 by Raymond Depardon. Sunday in Glasgow, Scotland, 1980. Photograph by Raymond Depardon.

The Glasgow effect: new study reveals causes of city's high mortality rates. Robert Preston takes the grainy photo – just a few square centimetres and yellowing with age – from his wallet and with a careful thumb and forefinger holds it up to the light. 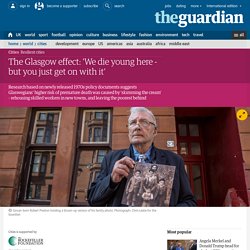 In the picture he is just seven and his three brothers are aged three to 11, the youngest grave-faced and chubby cheeked. His 14-year-old sister, her dark hair perfectly coiffed, peeps over the tops their heads. It’s the Glasgow Fair holiday circa 1947 and they are in Dunoon, a coastal town that sits on the Firth of Clyde and a popular “doon the watter” destination for Glaswegians escaping the urban sprawl. “I’m the only one left now.” Queen Street Station, Glasgow. (1985) Take a look at this picture from 1973 of the #Collins factory in Bishopbriggs, about 4 miles outside of #Glasgow. #ThrowbackThursday □ View from Millarstone high flats in Paisley. Ferguslie Park on the left. (1970s) Picture: Mark Flemming.

A Corporation bus at the Haven Bar on Springburn Road, Glasgow in 1982. Had to share this great pic from a Daily Record Celtic '67 story. I love seeing the European Cup in unusual settings. Parkhead Station, Glasgow. (1963) Buchanan Bus Station, Glasgow. (1979) Pic: Guy Arab UF. George Square, Glasgow. (1955) *****Glasgow Underground (1977) The Glenburn service in Paisley town centre. (1970s) A Glasgow bound train inside the now demolished train shed at Oban Railway Station. (1977) Pic: EMRC. Hawthorn Street, Possilpark, Glasgow. (1950s) Celtic v Aberdeen at Hampden in 1937. 147,365 attendance the largest ever for a domestic match in Europe. (PA) Glasgow in 1980 by Raymond Depardon. He was commissioned to photograph the city for the Sunday Times but his photographs were considered too bleak to publish at the time.…