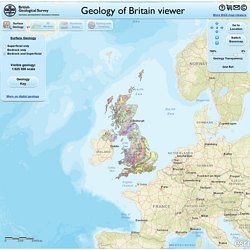 To facilitate this, the viewer can operate in one of four modes: To switch modes, use the 'Surface Geology', '3D Models', 'Borehole Scans' and 'Earthquake Timeline' buttons located under the banner. *****Make-a-map : a geological map of Britain and Ireland. What Is Geology? Geology is an earth science concerned with the solid Earth, the rocks of which it is composed, and the processes by which they change over time. 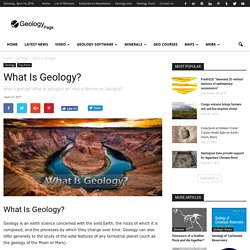 Geology can also refer generally to the study of the solid features of any terrestrial planet (such as the geology of the Moon or Mars). Geology gives insight into the history of the Earth by providing the primary evidence for plate tectonics, the evolutionary history of life, and past climates. Geology is important for mineral and hydrocarbon exploration and exploitation, evaluating water resources, understanding of natural hazards, the remediation of environmental problems, and for providing insights into past climate change.

Geology also plays a role in geotechnical engineering and is a major academic discipline. Mapping & Fieldwork Field mapping:Geologists traditionally record in field notebooks their observations, including sketches, measurements (for example, the angle of tilted strata), and narratives. Jason Sawle sur Twitter : "This is pushing the new Interactive Key App to the limits. UK 625k geology that you can explore by clicking on the Key to show a particular rock unit. Great for simplifying and understanding geological structures and their exten. Ok geology Twitter I need help!!! This was in Joshua Tree. What is happening here??? What are those lines??? How are those lines???? My dad's hand for scale… *****Neil Armstrong (right) and Buzz Aldrin (@TheRealBuzz) (left) inspecting rock samples on their geology field trip today near El Paso, Texas. #Apollo11 #Apollo50…

My right foot is on 540 million year old rocks, while my left foot is on 1.7 billion year old rocks! This is an outcrop of the Great Unconformity near Las Vegas that I visited over the weekend. You can track this "missing. Hafsa Bobat sur Twitter : "Always remember my #geographyteacher drawing this diagram on the board; it was just a simple drawing but really stuck in my mind and I remembered it ever since, using it in my own teaching! □ @Portsmouthhigh… Yep, even in the British Isles, there are new, unexplored geological frontiers. Check out the thread below. #welljel… Geological Outreach sur Twitter : "For 14-18 year-old students in the UK who are interested in geology, here's a compilation of schools and colleges that offer GCSE or A level qualifications. Let me know if I've missed any or you spot any other errors htt.

Wow. Just like a schematic diagram from a geology textbook.… Dr. Chris Bedford sur Twitter : "Modelling chain silicate cleavage using #kitkat another great idea from #ESTA18 (but why doesn’t it just cleave like a sheet silicate instead of zigzagging it’s way between the chains...??) @SBC_Geology @GeologyReph… https. As true today as it was in 1857 "Now geology is one of those sciences which ought not to be neglected in the education of youth.

It's not everyday you can put your hand on the very layer in the rock record that marks the "day the dinosaurs died out. BGS sur Twitter : "From Instagram: It’s #tectonictuesday and this week we’re in Ardwell Bay, near Stranraer in Dumfries and Galloway. The image shows an anticline in greywackes of the Garheugh Formation, Silurian with the fold hinge plunging gently south- Ferris Jabr sur Twitter : "If you put chalk under a powerful microscope—white cliffs of Dover type chalk, not the modern blackboard variety—you will see something like this Because it's not just a rock. It's an accumulation of ancient skeletons: the armor. Twitter. □ All edible! #geogbakeoff #geographyteacher… Emapsite sur Twitter : "Late to the party, but what a great idea! British Isles #map showing off its unusually varied geology, with actual rock from respective areas □ @BritGeoSurvey Credit to @DuncanSKing for image □…

Twitter. Small fault in a cobble I found in the Rush Creek Delta:… Rock stars: Geologists on the silver screen. Credit: K. 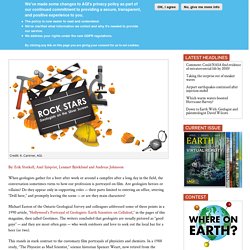 Cantner, AGI. By: Erik Sturkell, Axel Sjöqvist, Lennart Björklund and Andreas Johnsson When geologists gather for a beer after work or around a campfire after a long day in the field, the conversation sometimes turns to how our profession is portrayed on film. Are geologists heroes or villains? Do they appear only in supporting roles — their parts limited to entering an office, uttering “Drill here,” and promptly leaving the scene — or are they main characters? Michael Easton of the Ontario Geological Survey and colleagues addressed some of these points in a 1990 article, “Hollywood’s Portrayal of Geologists: Earth Scientists on Celluloid,” in the pages of this magazine, then called Geotimes. This stands in stark contrast to the customary film portrayals of physicists and chemists. Much has changed in the last few decades, however, so we decided to reexamine the question of how geologists are portrayed on film, incorporating movies released since 1990.

Rock found on Rheidol River beach near Aberystwyth, Wales. Can anyone help me identify? Is it a #fossil coral, is it #Ordovician. #geology… #HolidaySnaps: Lovely view of the Ardnamurchan volcanic complex on the most westerly point of the British mainland. The complex was formed ~43 million years ago. Great interpretation board explaining the geology by @lochabergeopark… What is geologic time, and how does it work? I’m sure you all remember where you were when you found out that the statistical correlation of magneto-biostratigraphic calcareous nannofossils with M-sequence magnetic anomalies approximated new boundaries for Tethyan Kimmeridgian of Sardinia (Muttoni et al. 2018). 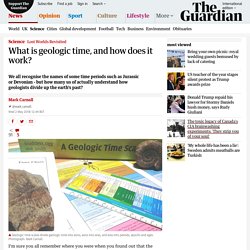 I was on my laptop at the time. I’ll confess, I struggle to even begin to understand what this new paper is about, beyond the broad principle that a chunk of the rock record as it relates to geological time is being slightly tweaked. The Kimmeridgian is a stage of the Upper Jurassic series – the last series in the more-famous-than-most Jurassic System.

We are talking, of course, about the geological time scale, the ridiculously complex scale we use to describe and divide the history of the Earth into different sections. Unlike the periodic table, despite the fancy sounding magneto-biostratigraphic techniques used to create the geologic time scale, it doesn’t really mean a great deal. Now that's what I call bioturbation! Tertiary (?) limestones Alghero, Sardinia. @geolsoc @SBC_Geology @ESTA_UK @SwchsGeology @Geol_Greenhead @EmmaEarth @geoggeol @StagYale6th @GeoBus_StA @MikeGeolHorton… Faulted Sedimentary Rock Layers, Guatemala. BGS sur Twitter : "Our Climate Through Time online map allows you to explore the geological history of the UK and Ireland through the various climates we've experienced in our long and varied history. #MappingMonday.

Devon village is rising 2cm a year, and scientists have no idea why. Geological Society sur Twitter : "It's finally here...Porgs, @geoscientistmag, demogorgons and #MinCup - it can only be the Great #Geobakeoff 2018! Send us your entries by Sunday 13th May to win Eternal Geobaking Glory □□⛏□ https: TEACHERS: this chart is great for helping to determine the texture and mineral makeup of igneous rocks! #geology… Stephanie Mills sur Twitter : "So sorry, here is the corrected bonus puzzle! You all are doing so well on the 1st puzzle! Here is a bonus challenge puzzle. Answer with a reply (freestyle or choose an option) or do poll below. Answers to both #Superpositio. Stephanie Mills sur Twitter : "Happy #SuperSundayStructures! Here's the 1st #SuperpositionPuzzle: in what order, oldest to youngest, were these structures formed? There are some tips pinned to my page. You've got 24hrs! This one is easyish to get us warme. 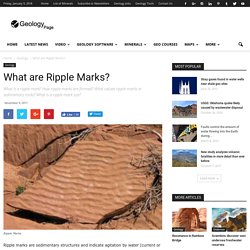 Ripple marks are ridges of sediment that form in response to wind blowing along a layer of sediment. Ripple marks form perpendicular to the wind direction and each ridge is roughly equidistant from the ripple mark on either side. The troughs and ridges of fossilized ripple marks in sandstone and siltstones are hardened versions of the short-lived ripples in the loose sand of a modern-day stream, lake, sea, or sand dune. Ripples may be made by water or, in sand dunes, by wind. The symmetry of water-current ripple marks indicate whether they were formed by gentle waves or faster water currents. There are two types of ripple marks: Symmetrical ripple marks Often found on beaches, they are created by a two way current, for example the waves on a beach (swash and backwash).

Asymmetrical ripple marks These are created by a one way current, for example in a river, or the wind in a desert. Tissue & foam to make minor folds. Clearly, some geological education needed here but at least that's the Christmas tipple sorted! @SBC_Geology @ESTA_UK @ign_petrology. A lovely day exploring the north west coastline of Papa Westray. So much incredible geology on one tiny island! #visitorkney #papawestray… Looking for inspiration for a #PlateTecStories competition entry? Look no further than our blogpost, packed full of ideas for entries from a… As promised, here are some more detailed climbing ripple pictures. Brace yourselves... cc @EC_Kosters @CosyNomad. This is Geography writing at its informative & lyrical best.