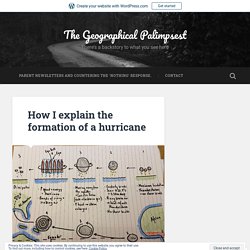 Sure, cross sections where students can identify the features and the pre-requisites for their formation are fine, but I wanted to delve deeper. I want students to know the genesis of a hurricane from its humble beginnings as a series of small thunderstorms in equatorial Africa to the phenomenal hurricanes that news stations are so happy to send reporters out in to. To begin, I ask what Mark Enser would term a fertile question – ‘Why is the United States interested in thunderstorms in Africa?’ Step Two – Planning the Page Again, I would always suggest using a student exercise book to plan out drawings and explanations.

Step Three – Planning Stages I would draw the birds-eye view first then follow this with the cross-sectional view. Step 4 – Thunderstorms over Africa The key points I would want students to know are: *****Why do Tropical Cyclones maintain intensity or even strengthen slightly inland over the Everglades? Due to evaporation from "Wet" Soils, a.k.a. the Brown Ocean Effect. *****Danger of flying debris: The remnants of #TyphoonMaysak in Vladivostok, #Russia, 3 September 2020. Videos from @vkontakte via @WeatherSarov1. *****An ‘unsurvivable storm surge’ forecast by NHC for southern US states due to Hurricane Laura. Watch what that means. Scary stuff. *****Watch - How hurricanes form (animation) With two named storms already under our belt, you may be wondering why hurricane season officially starts today, June 1st. Believe it or not, it used to begin later. 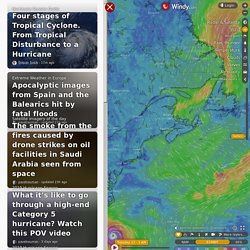 Virginia Beach Moosonee Ontario. Hurricanes and Climate Change - BBC Weather. *****Visualization of how storm surge: Here's a powerful representation of the impacts of a storm surge. But this is 6ft. #HurricaneDorian brought a 20ft surge to parts of the Bahamas! *****Visualization of how storm surge can quickly become the deadliest threat associated with a hurricane. #HurricaneDorian has brought devastating storm surge to the Bahamas as it continues to churn over the area as. Prof Ray Wills sur Twitter : "Extraordinary @weatherchannel visualization of storm surge VR tech using Unreal Engine to render real-time to educate and reveal the havoc that extreme storms like hurricanes can cause #HurricaneDorian #Immersive #MixedRealit. *****Puerto Rico population near 40-year low in 2018 after hurricanes. The population of Puerto Rico stood at 3.2 million in 2018, its lowest point since 1979 and down sharply from 2017, when hurricanes Maria and Irma hit the island, according to a Pew Research Center analysis of U.S. 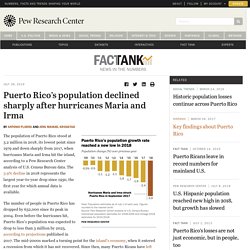 Census Bureau data. The 3.9% decline in 2018 represents the largest year-to-year drop since 1950, the first year for which annual data is available. The number of people in Puerto Rico has dropped by 632,000 since its peak in 2004. Even before the hurricanes hit, Puerto Rico’s population was expected to drop to less than 3 million by 2025, according to projections published in 2017.

*****Tropical cyclone wind speed relative to ocean sea surface temperature. Very warm ocean water is a necessary, but not sufficient, criterion for forming the strongest tropical cyclones such as Category 5 hurricanes and super typh. Twitter. Hurricanes! Almost all of those that hit the USA develop in the same spot off of the West coast of Africa. *****Are hurricanes getting worse? As Florence barrels toward the US east coast, two more hurricanes follow closely behind. 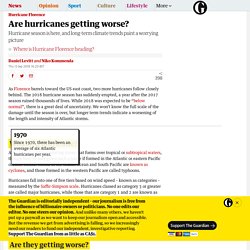 The 2018 hurricane season has suddenly erupted, a year after the 2017 season ruined thousands of lives. While 2018 was expected to be “below normal”, there is a great deal of uncertainty. We won’t know the full scale of the damage until the season is over, but longer term trends indicate a worsening of the length and intensity of Atlantic storms.

Since 1970, there has been an average of six Atlantic hurricanes per year. *****Simulation: Storm surge will be a huge factor for Hurricane #Florence Check out what it might look like with @TWCErikaNavarro:… This kind of coastal development never made sense. Now it's dangerous. (Assateague, MD on left. Topsail, NC on right)… This is located at the Wrightsville Beach Museum. #Hazel literally is heads above the rest!… Japan hit by deadly earthquake and mudslides. Image copyright EPA/Jiji press Japan's northern island of Hokkaido has been hit by a powerful earthquake, triggering landslides that engulfed houses. 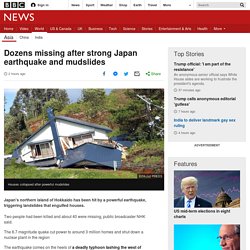 Two people had been killed and about 40 were missing, public broadcaster NHK said. The 6.7 magnitude quake cut power to around 3 million homes and shut down a nuclear plant in the region. *World Weather* Braving the winds of Typhoon Jebi in western Japan two days ago - and failing. Video via Meteo Hellas… WOW... Debris blown around from #typhoonJebi in south japan at the moment, very strong winds and heavy rain is affecting the the area... report; @PwankoP #severeweather #extremeweather #Japan. Stronger storms mean new 'category six' scale may be needed.

The increasing strength, intensity and duration of tropical cyclones has climate scientists questioning whether a new classification needs to be created: a category-six storm. 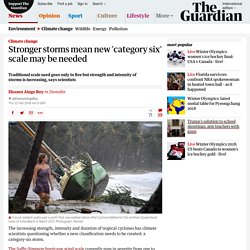 The Saffir-Simpson hurricane wind scale currently runs in severity from one to five, with five describing near-total destruction. But climate scientists meeting at a conference in the New Zealand city of Wellington have floated the idea of creating a category six to reflect the increasing severity of tropical cyclones in the wake of warming sea temperatures and climate change. Climatologist Michael Mann, the director of the Earth system science center at Penn State University said the current scale could be viewed as increasingly outdated. I ended up putting all of this into a video, describing how this phenomenon happens. Incredible loop of Cyclone Kelvin making landfall in Australia AND THEN forming an eye.…

Teaching TS - Why? Low pressure area over north-western #Australia expected to move over the ocean and become a tropical #cyclone tomorrow.… Best read in @The_GA Teaching Geography so far! Topical and fascinating! Can’t wait to share in class □□‍□□#hurricane #geography #fact. Hurricanes take their toll on US jobs market. Image copyright Getty Images US employment fell in September for the first time since 2010 as hurricanes Harvey and Irma took their toll on the jobs market. 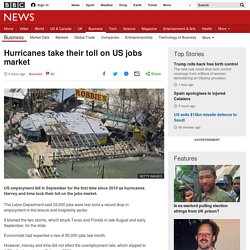 The Labor Department said 33,000 jobs were lost amid a record drop in employment in the leisure and hospitality sector. It blamed the two storms, which struck Texas and Florida in late August and early September, for the slide. Economists had expected a rise of 90,000 jobs last month. However, Harvey and Irma did not affect the unemployment rate, which slipped to 4.2% - the lowest since February 2001.

The US Labor Department uses separate surveys to capture payrolls data and the unemployment rate. Year 9s learning the recipe for a hurricane #mocktails. *****#Hurricanes explained... #HurricaneMaria #hurricanemaria2017. What Are Hurricanes, and How Do They Form? Every year, coastal regions brace themselves for violent windstorms known as hurricanes. 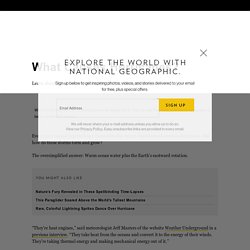 But how do these storms form and grow? What are hurricanes, typhoons and tropical cyclones? *****Storm surge warnings have been issued for Hurricane #Irma. Here's what makes storm surge so dangerous. Why you don't go near the sea during a storm surge. *****Why more people are killed in storm surge than by anything else in a hurricane. Who made this. □

***Bus blows over - Tropical cyclone Vardah hit Chennai, on the east Indian coast today. Flying through a Hurricane Eye wall. Caught between a rock and a soft place @PeterGWeather. How do hurricanes form? - BBC Weather.