Plant evolution. Extinction events GENERAL. Fish fingers. 1 Origin of life on Earth. Amazing adaptations. Darwin flaws. Creationism. Dinosaurs. Human evolution. Iterative Evolution. Recent evolution. Timelines of evolution. Sir David Attenborough and @ProfBrianCox talk about 'On the Origin of Species' #DarwinDay. I love when people send me infographics and maps to share. This one is particularly stupid which is why I love it even more.… Gannets underwater off Noss, #Shetland photographed with my #GoPro… When it comes to extinction, body size matters. On a certain level, extinction is all about energy. 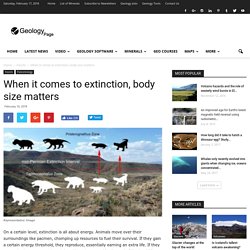 Animals move over their surroundings like pacmen, chomping up resources to fuel their survival. If they gain a certain energy threshold, they reproduce, essentially earning an extra life. If they encounter too many empty patches, they starve, and by the end of the level it’s game over. Models for extinction risk are necessarily simple. Most reduce complex ecological systems to a linear relationship between resource density and population growth — something that can be broadly applied to infer how much resource loss a species can survive.

This week in Nature Communications, an interdisciplinary team of scientists proposes a more nuanced model for extinction that also shows why animal species tend to evolve toward larger body sizes. “Unlike many previous forager models, this one accounts for body size and metabolic scaling,” Kempes explains. The other Dodo: Extinct bird that used its wings as clubs - This bird has evolved into a new species right in front of our eyes. In Brief A decades-long study shows that evolution can happen in as little as two generations. 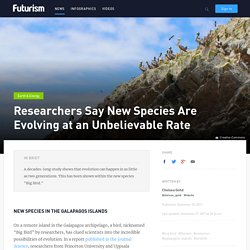 This has been shown within the new species "Big Bird. " New Species in the Galapagos Islands On a remote island in the Galapagos archipelago, a bird, nicknamed “Big Bird” by researchers, has clued scientists into the incredible possibilities of evolution. In a report published in the journal Science, researchers from Princeton University and Uppsala University have shown how Big Bird emerged as a new species in only two generations. This study came from research on Darwin’s finches on the Galapagos Islands. “The novelty of this study is that we can follow the emergence of new species in the wild,” B. Fossil hunters find man-sized penguin on New Zealand beach. #Geology #GeologyPage #Dinosaur #Fossil Displayed at Indroda D… The woolly mammoths range at its peak - The glasswing butterfly is so named for its transparent wings. (Photo by David Tiller.)

Mega-landslides as a vehicle for colonisation of distant islands. *****It's Alive! Algae Survive 16 Months Exposure To Space. Samples of algae that were exposed for almost a year and a half to the harsh conditions of space on the outside of the International Space Station, returned to Earth still alive. 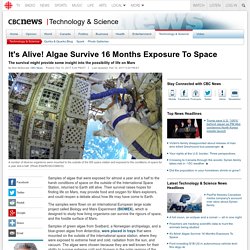 Their survival raises hopes for finding life on Mars, may provide food and oxygen for Mars explorers, and could reopen a debate about how life may have come to Earth. The samples were flown on an international European large scale project called Biology and Mars Experiment (BIOMEX), which is designed to study how living organisms can survive the rigours of space, and the hostile surface of Mars. Samples of green algae from Svalbard, a Norwegian archipelago, and a blue-green algae from Antarctica, were placed in trays that were mounted on the outside of the international space station, where they were exposed to extreme heat and cold, radiation from the sun, and vacuum.

No more rats: New Zealand to exterminate all introduced predators. The New Zealand government has announced a “world-first” project to make the nation predator free by 2050. 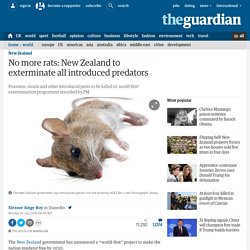 The prime minister, John Key, said on Monday it would undertake a radical pest extermination programme – which if successful would be a global first – aiming to wipe out the introduced species of rats, stoats and possums nation-wide in a mere 34 years. According to the government, introduced species kill 25m native New Zealand birds a year including the iconic ground-dwelling, flightless Kiwi, which die at a rate of 20 a week, and now number fewer than 70,000. The government estimates the cost of introduced species to the New Zealand economy and primary sector to be NZ$3.3bn (£1.76bn) a year. ***Urbanisation signal detected in evolution, study shows.

A "clear signal" of urbanisation has been identified in the evolution of organisms, which has implications for sustainability and human well-being. 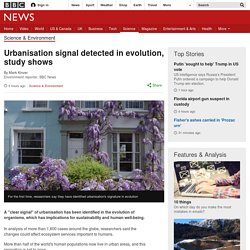 In analysis of more than 1,600 cases around the globe, researchers said the changes could affect ecosystem services important to humans. More than half of the world's human populations now live in urban areas, and this proportion is set to grow. The findings appear in the Proceedings of the National Academy of Sciences. "We found that there is a clear urban signal of big change, and also greater [physical and biochemical] change in urbanising systems compared to natural or non-urban anthropogenic systems," said co-author Marina Alberti from the University of Washington's Department of Urban Design and Planning.

"So urbanisation, globally, is clearly affecting things. " Refuting aquatic ape hypothesis. Occasionally in science there are theories that refuse to die despite the overwhelming evidence against them. 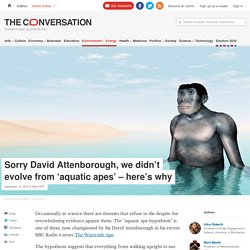 The “aquatic ape hypothesis” is one of these, now championed by Sir David Attenborough in his recent BBC Radio 4 series The Waterside Ape. The hypothesis suggests that everything from walking upright to our lack of hair, from holding our breath to eating shellfish could be because an aquatic phase in our ancestry. Since the theory was first suggested more than 55 years ago, huge advances have been made in the study of human evolution and our story is much more interesting and complicated than suggested by the catch-all aquatic ape hypothesis.

In 1960, marine biologist Alister Hardy published an article in New Scientist, titled: Was man more aquatic in the past? For Hardy, this aquatic phase would have occupied the gap in the fossil record that then existed - between around four and seven million years ago. Fossil sheds light on evolution of birdsong.