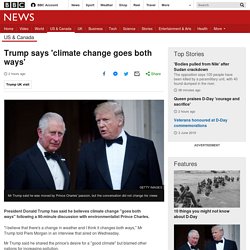 "I believe that there's a change in weather and I think it changes both ways," Mr Trump told Piers Morgan in an interview that aired on Wednesday. Trump's new science adviser says it's not his job to correct the president on climate change. WASHINGTON — For the first time since he took office, President Trump has a science adviser. 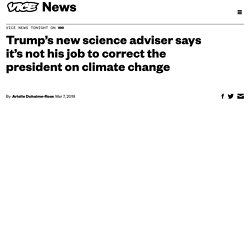 Kelvin Droegemeier is a meteorologist and, by all accounts, a thorough, well-respected scientist. But he doesn't appear to be the climate-change savior scientists hoped he’d be. Droegemeier, 60, became director of the White House Office of Science and Technology in January. And there was little on the record about his specific views on climate change.

But given his stellar reputation, scientists might expect him to act as a corrective to a president who regularly uses winter storms to mock climate change and erroneously suggests that global warming isn’t real. But in an interview in his brand-new office next to the White House, Droegemeier evaded questions about his own views. “The main thing for me is to provide the president with the best science advice possible,” he said. Droegemeier said he does believe climate change is occurring, and that humans play a “significant” role in it. Home / Twitter. #ClimateChangeIsReal… Australia PM adviser says climate change is 'UN-led ruse to establish new world order' - Telegraph. In his comment piece – described by critics as “whacko” – Mr Newman said the world has been “subjected to extravagance from climate catastrophists for close to 50 years”. 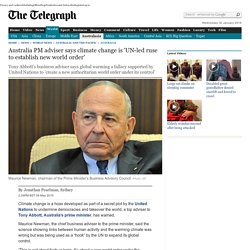 “It’s a well-kept secret, but 95 per cent of the climate models we are told prove the link between human CO2 emissions and catastrophic global warming have been found, after nearly two decades of temperature stasis, to be in error,” he wrote. “The real agenda is concentrated political authority. Global warming is the hook. Eco-catastrophists [ ...] have captured the UN and are extremely well funded. They have a hugely powerful ally in the White House.” Environmental groups and scientists described Mr Newman as a 'crazed’ conspiracy theorist and some called on him to resign. Twitter. AP to Trump on climate: Scientists say we're getting to a point where it's irreversible Trump: My uncle was a scientist...and. So according to Donald Trump, 62 drafting authors plus many many more climatologists from all over the world who put together the IPCC 1.5°C report have a political agenda. Remarkable stuff.

'It's hyped up': climate change skeptics in the path of Hurricane Florence. Republican lawmaker: Rocks tumbling into ocean causing sea level rise. Originally published by E&E News The Earth is not warming. 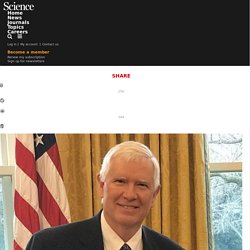 The White Cliffs of Dover are tumbling into the sea and causing sea levels to rise. Global warming is helping grow the Antarctic ice sheet. Those are some of the skeptical assertions echoed by Republicans on the U.S. House of Representatives Science, Space and Technology Committee yesterday. A leading climate scientist testifying before the panel spent much of the two hours correcting misstatements.

The purpose of the hearing was to focus on how technology could be deployed for climate change adaptation. Rep. "I'm a little bit disturbed by, No. 1, over and over again, I hear, 'Don't ever talk about whether mankind is the main cause of the temperature changing and the climate changing,'" he said. Rep. "To solve climate change challenges, we first need to acknowledge the uncertainties that exist," Smith said in his opening remarks.

"Is this chart inaccurate, then? " Rep. Brooks added that Antarctic ice is growing. The Pentagon erases ‘climate change’ from report drafted during Obama administration. FEMA Drops 'Climate Change' From Its Strategic Plan. Not even Level 1 on a 6-mark GCSE answer on climate change. Zero for SPaG, too.… For climate change deniers getting very excited that it's cold outside at the end of December, here's the ratio of hot extremes to cold extr…

"Natural #disasters caused by #climatechange often affect the world's poorest people, so the fact that the leader of one of the most powerfu… Dear science twitter, please don’t give up. Fight the good fight. We all want to scream after reading this nonsense but… The president is still the world’s leading proponent of the world’s stupidest talking point about climate change.… Nice moment to tell you my favourite weather/climate analogy... Your mood today doesn't necessarily tell me much about your personality. #28 of #125geotips Start a collection of geographical misunderstandings in the media to show the importance of a geographical education. It’s cold the day after tomorrow so there’s no global warming. FFS. Great to use in the classroom. Students, particularly year 7, will enjoy debunking the president. Donald Trump says US needs 'good old globa… @realDonaldTrump This may be the dumbest thing that you have tweeted in 2017. And that is saying something.

This is why a geographical education is important. It might stop you making a tit of yourself to millions of people (and dooming the world w… Yes, there’s a cold snap, but global temperatures right now look an awful lot like this comic I did for @thenib two years… This guy really is just so, so stupid.