Indian Ocean Dipole. La Nina. El Nino 2018-19. Yes, Australia is a land of flooding rains. But climate change could be making it worse. Over the past three years, I’ve been working on the forthcoming report by the United Nations’ Intergovernmental Panel on Climate Change. 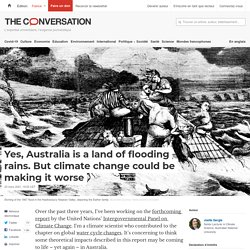 I’m a climate scientist who contributed to the chapter on global water cycle changes. It’s concerning to think some theoretical impacts described in this report may be coming to life – yet again – in Australia. The recent flooding in New South Wales is consistent with what we might expect as climate change continues. Australia’s natural rainfall patterns are highly variable. Royal Geographical Society - Geography resources for teachers. Climate change may kickstart dormant El Niño weather system in Indian Ocean. An El Niño-like weather system that has been dormant for millennia in the Indian Ocean could be kick-started due to climate change, according to new research. 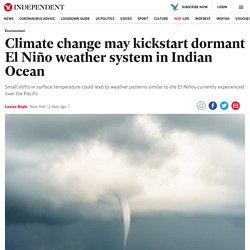 The study found small shifts in sea surface temperature in the Indian Ocean could lead to weather patterns similar to the El Niños currently experienced over the Pacific Ocean. The El Niño phenomenon is a broad, ocean-atmosphere climate interaction linked to periodic warm waters along the Equator across the central and eastern areas of the Pacific Ocean, according to the National Ocean Service. They typically occur every three to seven years and an episode can last up to two years.

Download the new Independent Premium app. @lcgeography @GISinSchools @GIS4Schools @josephkerski @GeoConor An animation using the time-enabled @Esri layer of 'Sea Surface Temperature (°C)' from 2008 to 2019. Apart from the dramatic global seasonal variations, you can pick out the 2014-16 and 2018- > 2019 is the highest on record (global average). Note the long-term warming and patterns of climate variability (e.g., El Niño/La Niña). [Data from ERSSTv5 at.

Royal Geographical Society - Geography resources for teachers. *****Want to see 168 years of climate change in two minutes? Here is our movie, updated through 2017.… Another El Niño on the horizon? / Space for our climate / Observing the Earth. 7 December 2018 The jury is still out as to whether climate change will lead to stronger El Niño events, but while representatives from around 200 countries at the COP24 conference are working to breathe life into the 2105 Paris Agreement, there is a 75–80% chance that a fully-fledged event could be with us in the next couple of months. 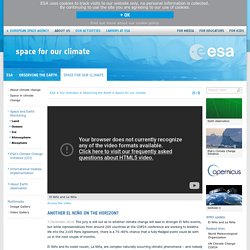 El Niño and its cooler cousin, La Niña, are complex naturally occurring climatic phenomena – and nobody really knows if our changing climate will affect them.El Niño and La Niña are opposite phases of what is known as the El Niño-Southern Oscillation and occur at irregular intervals of between two and seven years. Eu.usatoday. Met Office Science sur Twitter : "We’re on the cusp of another #ElNino, with models forecasting a moderate event. To find out what this might mean globally, check out our explainer video – which has just gone past 1 million views!! Twitter. Exclusive: Ancient Mass Child Sacrifice in Peru May Be World's Largest. Photographs by Gabriel Prieto Evidence for the largest single incident of mass child sacrifice in the Americas— and likely in world history—has been discovered on Peru's northern coast, archaeologists tell National Geographic. 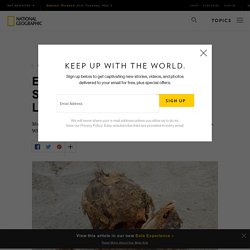 More than 140 children and 200 young llamas appear to have been ritually sacrificed in an event that took place some 550 years ago on a wind-swept bluff overlooking the Pacific Ocean, in the shadow of what was then the sprawling capital of the Chimú Empire. Scientific investigations by the international, interdisciplinary team, led by Gabriel Prieto of the Universidad Nacional de Trujillo and John Verano of Tulane University, are ongoing.

The work is supported by grants from the National Geographic Society. "I, for one, never expected it," says Verano, a physical anthropologist who has worked in the region for more than three decades. A Stunning Tally, and a Tragic End A Scatter of Footprints, Frozen in Time An Unprecedented Event? "Also, at a personal level. " El Nino's long reach to Antarctic ice. Image copyright NASA Antarctica may be thousands of kilometres from the central Pacific but events there can have a significant effect on the White Continent's ice. 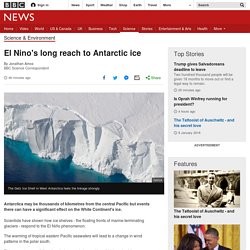 Scientists have shown how ice shelves - the floating fronts of marine-terminating glaciers - respond to the El Niño phenomenon. The warming of tropical eastern Pacific seawaters will lead to a change in wind patterns in the polar south. This promotes snowfall on the shelves, and also melting of their undersides. These are competing processes, of course. However, the net outcome is a loss, say scientists. It is another example of the complexity researchers need to grasp as they try to gauge how Antarctica will react to a warming world. 2017 was the hottest year on record without an El Niño, thanks to global warming #ClimateChange #extremeweather. Understanding El Nino (Story Map) El Niño resource with storymaps, plenary questions, student worksheets, vocab lists, PPTs for those who can't access it online, AND step by…

Climate Prediction Center - ONI. Notice: Because of the high frequency filter applied to the ERSSTv5 data (Huang et al. 2017, J.Climate), ONI values may change up to two months after the initial "real time" value is posted. 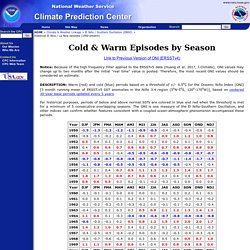 Therefore, the most recent ONI values should be considered an estimate. DESCRIPTION: Warm (red) and cold (blue) periods based on a threshold of +/- 0.5oC for the Oceanic Niño Index (ONI) [3 month running mean of ERSST.v5 SST anomalies in the Niño 3.4 region (5oN-5oS, 120o-170oW)], based on centered 30-year base periods updated every 5 years. For historical purposes, periods of below and above normal SSTs are colored in blue and red when the threshold is met for a minimum of 5 consecutive overlapping seasons. Climate Prediction Center: ENSO Diagnostic Discussion. Synopsis: There is an increasing chance (~55-60%) of La Niña during the Northern Hemisphere fall and winter 2017-18. 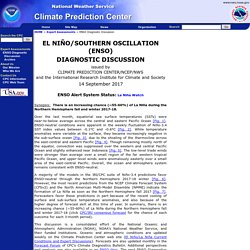 Over the last month, equatorial sea surface temperatures (SSTs) were near-to-below average across the central and eastern Pacific Ocean [Fig. 1]. ENSO-neutral conditions were apparent in the weekly fluctuation of Niño-3.4 SST index values between -0.1°C and -0.6°C [Fig. 2]. While temperature anomalies were variable at the surface, they became increasingly negative in the sub-surface ocean [Fig. 3], due to the shoaling of the thermocline across the east-central and eastern Pacific [Fig. 4]. Though remaining mostly north of the equator, convection was suppressed over the western and central Pacific Ocean and slightly enhanced near Indonesia [Fig. 5]. Extreme El Niño events more frequent even if warming limited to 1.5C – report. Extreme El Niño events that can cause crippling drought in Australia are likely to be far more frequent even if the world pulls off mission improbable and limits global warming to 1.5C. 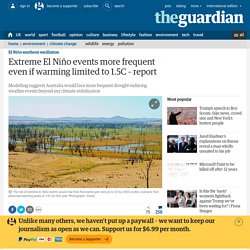 International scientists have released new modelling that projects drought-causing El Niño events, which pull rainfall away from Australia, will continue increasing in frequency well beyond any stabilisation of the climate. Even if warming is limited to 1.5C – something scientists have warned is unlikely if not impossible – the modelling suggests Australia will face more frequent drought-inducing weather events. The risk of extreme El Niño events would rise from the current five events per century to 10 per century by 2050 under a scenario that presumes warming peaks at 1.5C by that year. But the risk keeps on rising for a further 100 years – to about 14 events per century by 2150. *****The El Niño event of 2015-2016 as seen by Metop-A/B AVHRR Sea Surface Temperature (SST) data produced by EUMETSAT OSISAF. *****El Nino 2017?! (1/) Something really remarkable is happening off the coast of #Peru and here's why you should care...

Australia placed on El Niño 'watch' as weather bureau puts chance at 50% for 2017. Australia could be heading into another El Niño year according to new analysis by the Bureau of Meteorology, which found the chance Australia would be affected by the phenomenon in 2017 had increased to 50%. 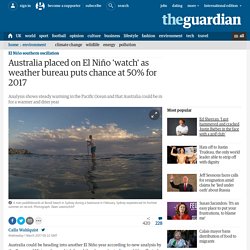 Six of the eight models used by Australian climatologists to predict El Niño and La Niña events indicate the El Niño threshold could be reached by July, while seven indicate a steady warming in the Pacific Ocean over the next six months. El Niño is declared when temperatures in the tropical Pacific Ocean are 0.8C above average, and brings a dry winter and spring to southern Australia and a warmer than average spring and summer to the eastern states. It comes as the Bureau of Meteorology (BoM) confirmed Sydney had just experienced its hottest summer on record, with mean temperatures 2.8C above the long-term average.

Sydney experienced a record-breaking 26 days of 30C or higher and 11 days of 35C or higher. Created a 3d model template for my year 10s to visually understand the difference between El Nino & La NIna. #geographyteacher #globalhazard. Australia’s climate in 2016 – a year of two halves as El Niño unwound - @ConversationEDU. Teleconnections: Lives devastated as El Niño drives drought in Mozambique – in pictures. NASA predicts a ‘return to normal’ in ENSO conditions. Not too hot, not too cold – instead, water temperatures in the equatorial Pacific Ocean should be just around normal for the rest of 2016, according to forecasts from the Global Modeling and Assimilation Office, or GMAO. 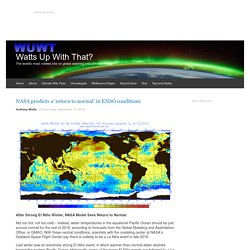 With these neutral conditions, scientists with the modeling center at NASA’s Goddard Space Flight Center say there is unlikely to be a La Niña event in late 2016. After Strong El Niño, NASA Sees Return to Normal. Elevated carbon dioxide concentrations in the atmosphere may increase water-use efficiency in crops and considerably mitigate yield losses due to climate change, according to a new NASA study. The results, published in the journal Nature Climate Change on April 18, show some compensation for the adverse impacts of temperature extremes and water scarcity caused by increasing emissions of carbon dioxide and other greenhouse gases. A wheat field in Eastern India near Murshidabad. Credits: Photo copyright Nupur Das Gupta Studies have shown that higher concentrations of atmospheric carbon dioxide affect crops in two important ways: they boost crop yields by increasing the rate of photosynthesis, which spurs growth, and they reduce the amount of water crops lose through transpiration.