Quick arithmetic. Scatter graph; Correlation; Outliers. Star diagrams / Radial graphs. Statistical myths. Venn diagrams. All possible ways to divide 360 into equal parts, animated version #mathart #animation #CreativeCoding #WolfLang #Mathematica. Ok, we found something amazing and we demand you to come on a journey with us: Just seen the original nomination form for Florence Nightingale to join @RoyalStatSoc as our first female fellow. 17 Equations that Changed the World by @joatstewart.

Just lovely.... A Squircle is a mathematical shape intermediate between a Square and a Circle. It's a special superellipse and not a "rounded square". Dashboard: Understanding the UK economy. Correlation Coefficients. Division by zero is a mathematical challenging concept: see what happens when you try in on a mechanical calculator. @TihoBrkan @simongerman600 When you start down the road of looking for patterns...pretty soon you can't NOT see them everywhere:-))

Chinese multiplication method. *****Every now and again, things are in alignment: ' These points are then aligned and rotate' Estos puntos giran y luego se alinean... □ This is amazing! But also you can just cross the letters out. But also this is amazing! Best statistics question ever. *****So useful for both GCSE and A Level Geography. Surprised to see Chi Squared and Mann Witney U methods too. *****Delayed £50m Cambridge North railway station opens.

*****The cladding of the newly opened Cambridge North station is based on the patterns generated by Conway’s Game of Life. This is how a Tower of Lire works. *****Five incredible facts about infinity. In her book Beyond Infinity, Dr Eugenia Cheng explores the inner workings of infinity, a mysterious concept that we all know about from childhood, but never truly claim to understand. 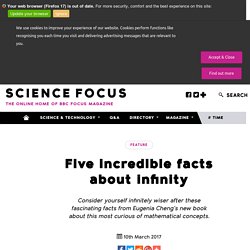 There are infinite facts in the book (well, quite a lot at any rate), but here’s just a fraction for now. Infinity plus one Imagine an infinite hotel with rooms numbered 1, 2, 3, 4 and so on forever. Even if it was full you could always fit in another guest - just ask all the old guests to move up one room, leaving room 1 free for the new guest. However, this does cause an infinite hassle, as all the guests have to move rooms.

Same means, standard deviations and correlation! by @JustinMatejka & Fitzmaurice. In the #dataviz world pie charts aren't much liked. Rule of thumb: only use to display two categories. Why numbers are sometimes better than words. What people think you say “almost certainly", “probably", or “highly unlikely”. Why you should not use pie charts. Visual proof of Pythagoras Theorem. *****Rose diagrams for temp, rain, sun: Good luck if you’re running @LondonMarathon this weekend! Keep ahead of the forecast at #LondonMarathon. #OnThisDay 1967: Three hundred and forty-eight, three hundred and forty-nine... BBC Archive has a new hobby. Amazing mathematical operations by @JustinWolfers.

Well-being dashboard. Some regular polygons can perfectly tile the plane without gaps or overlaps. But regular pentagons can't. Pie charts aren't overly popular in the #dataviz world. Rule of thumb don't use for more than two categories. A great 'Map of Mathematics' by @DominicWalliman. Penrose triangle - impossibility in its purest form. Part of today's #geo4b lesson #geog4b #geographyteacher #correlation #causation #mathschat @SJCR_GEOG. Countdown of Top 10 Reasons to Never Ever Use a Pie Chart (The Designer Experience) Pie charts are evil. 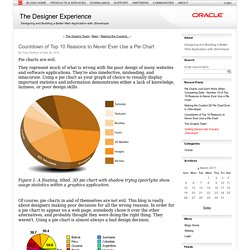