This is what we have descended to: tourists @AuschwitzMuseum posing for photos &amp; selfies. Auschwitz is a sacred place for human civilization, it is a memorial to the dead. It is not a theme park. For me, these photos, to paraphrase Hannah Arendt, show. BBC Radio 4 - Radio 4 in Four - Nine of the world’s dark tourism destinations. *****Whaley Bridge six weeks on - a town receiving international disaster tourists! The Chernobyl effect? Tourism booming in Whaley Bridge as visitors pile in to see town almost flooded off the map. It is the Derbyshire town which, just four weeks ago, was hours from being wiped off the map. 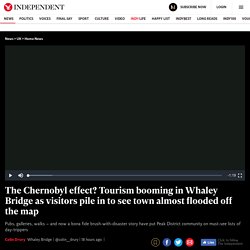 Thousands of Whaley Bridge residents were evacuated as a collapsing dam threatened to send 280 million gallons of water flooding over the Peak District community. But, it seems, a light brush with a little existential calamity may not be altogether bad for business: tourism here is booming in the aftermath. We’ll tell you what’s true. You can form your own view. From 15p €0.18 $0.18 USD 0.27 a day, more exclusives, analysis and extras. Cafes and shops are reporting record numbers of visitors, while holiday lets have seen a surge in last-minute bookings.

The Chernobyl effect is what some are calling it – although, says Martin Thomas, chair of Whaley Bridge Town Council: “Obviously there’s no danger of radiation here.” On a sunny day, it is easy to see why there is a flood (no pun intended) of visitors arriving. Visitors are intrigued by what happened, too, the 65-year-old reckons. Looking for somewhere to go this bank holiday weekend? Ireland has no shortage of popular dark tourism sites associated with death or incarceration. Your tour guide: @gillianmobrien @LJMU.

Royal Geographical Society - Geography resources for teachers. *****Nuclear wasteland selfies draw ire as tourists flock to Chernobyl. *****Looking for somewhere to go this weekend? Ireland has no shortage of popular dark tourism sites associated with death or incarceration. Your tour guide: @gillianmobrien @LJMU. ‘A culture fix like no other’ - David Farrier visits tourist attractions that offer ‘death and destruction’ Netflix’s Dark Tourist and the trouble with ‘extreme’ travel TV. One of the most unpleasant rumours I can recall emerging from the Balkan wars of the 1990s was of a German agency who organised trips for tourists to “visit” the conflict and even participate. 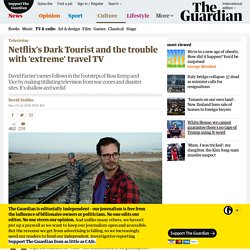 There’s nothing quite so appalling as that in David “Tickled” Farrier’s new Netflix series Dark Tourist, although it does venture into the grotesquely bizarre. He looks at the trend for Nuclear Tourism, for example, in which people flock to soak up the radiation left behind following the disaster in Fukushima, as well as the tourist industry that has built up around the serial killer Jeffrey Dahmer. He also visits locations in Africa and South America associated with death and destruction that some tourists find somehow attractive, a shameful attraction the makers of Dark Tourist assume is shared to a degree by the viewer. Meanwhile, in Misadventures, when comedian Ranganathan visits Port-Au-Prince in Haiti, he has a moment of genuine doubt as to what he is doing there. Today FM - What Is Dark Tourism? A journey from Alcatraz to Robben Island to Strokestown House & Pearl Harbour via French Revolution & US Civil War. #DarkTourism #heritage #history.

*****Dark tourism (thanatourism) Living Geography. *****Italian tourist treasure turned into ghost town by earthquake. Image copyright Getty Images From a distance Castelluccio looks the same as it has done for 1,000 years, a beautiful hilltop town in the midst of one of Italy's most celebrated plains, the Piano Grande. 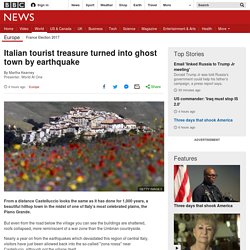 But even from the road below the village you can see the buildings are shattered, roofs collapsed, more reminiscent of a war zone than the Umbrian countryside. Nearly a year on from the earthquakes which devastated this region of central Italy, visitors have just been allowed back into the so-called "zona rossa" near Castellucio, although not the village itself. The red zone marks areas still regarded as too dangerous to visit but an exception was made for people to see "La Fioritura". 'Worst view in the world': Banksy opens hotel overlooking Bethlehem wall. The Walled Off hotel may sound utilitarian, even bleak. 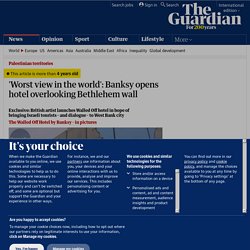 Its owner says it has “the worst view of any hotel in the world”, while its 10 rooms get just 25 minutes of direct sunlight a day. But, nestled against the controversial barrier wall separating Israel from the Palestinian territories, the West Bank’s answer to the Waldorf offers travellers something more elusive than any luxury destination. The lodging in Bethlehem is a hotel, museum, protest and gallery all in one, packed with the artworks and angry brilliance of its owner, British street artist Banksy. Home - Dark Tourism - the guide to dark & weird places around the world. Dark tourism sites around the world - Travel. Eerie Photos of 'Dark Tourism' Sites Around the World. Museums and memorials around the globe reveal histories of death, indignity, and destruction. 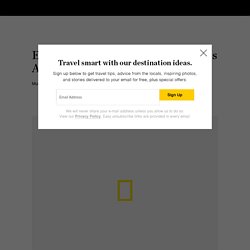 Tuol Sleng is a portrait of cruelty. Photographs of emaciated corpses dress the rooms in a macabre wallpaper, and rusty blood spatter stains the checkered tiles—evidence of the systematic arrest, torture, and slaughter of Cambodian civilians during the haunting reign of the Khmer Rouge. Eerie Photos of 'Dark Tourism' Sites Around the World.