*****Nothing better than a night under the stars #BreconBeacons #FindYourEpic. 20 of the best places to stargaze in the UK. South Downs national park, Hampshire, West and East Sussex The South Downs became an international dark sky reserve in May 2016, with 66% of the park having bronze-level skies (as assessed by the International Dark Sky Association), which means the Milky Way and Andromeda galaxy can be seen. 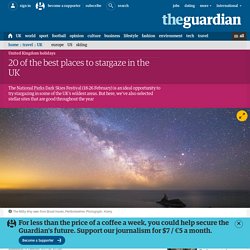 The Darkest Town In America. GERLACH, Nev. — Here in the desert, the Earth boils and stars fill the sky. 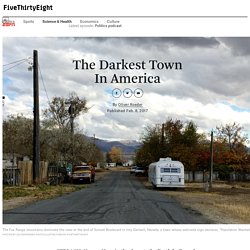 By day, you can see plumes of geothermal steam rising in every direction, pouring from vents in the ground and disappearing into the crisp, dry air. At night, you can see distant galaxies with the naked eye, their light much older than our species. Five years ago, NASA launched a satellite that’s roughly the size of a minivan and that circles our planet 14 times a day. Its largest instrument collects information from across the electromagnetic spectrum over land, ice and ocean. Scientists analyzed its data and combined that with measurements taken on the ground to map our planet’s light pollution. “As you see, the largest dark area is in northwest Nevada. So that’s where I went. Getting smarter about city lights is good for us and nature too. Ideas to enhance the liveability and sustainability of our cities have attracted a lot of interest recently. 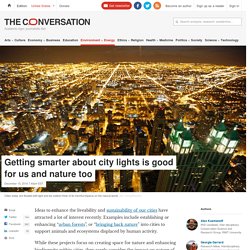 Examples include establishing or enhancing “urban forests”, or “bringing back nature” into cities to support animals and ecosystems displaced by human activity. While these projects focus on creating space for nature and enhancing biodiversity within cities, they rarely consider the impact on nature of the artificial lighting used across the urban landscape. Public lighting is often thought to be essential for improving safety and preventing crime.

Most commercial and public structures are lit up at night, although often for purely aesthetic reasons. Milky Way now hidden from one-third of humanity. The Milky Way, the brilliant river of stars that has dominated the night sky and human imaginations since time immemorial, is but a faded memory to one third of humanity and 80 percent of Americans, according to a new global atlas of light pollution produced by Italian and American scientists. 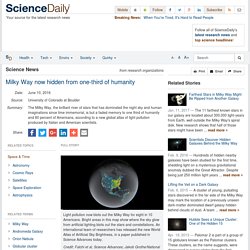 Light pollution is one of the most pervasive forms of environmental alteration. In most developed countries, the ubiquitous presence of artificial lights creates a luminous fog that swamps the stars and constellations of the night sky. "We've got whole generations of people in the United States who have never seen the Milky Way," said Chris Elvidge, a scientist with NOAA's National Centers for Environmental Information in Boulder, Colorado. Light pollution map. Close The light pollution map has two base layers (road and hybrid Bing maps), light pollution overlays and the user light pollution measurements overlay. 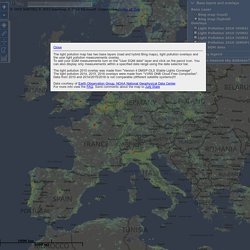 To add your SQM measurements turn on the "User SQM data" layer and click on the pencil icon. You can also display only measurements within a specified date range using the date selector bar. The light pollution 2010 overlay was made from "Version 4 DMSP-OLS Stable Lights Coverage". Puerto Rico Goes Dark. Late on September 21, 2016, a fire at a power plant substation in southern Puerto Rico triggered a cascade of problems across the island’s aging electrical grid. 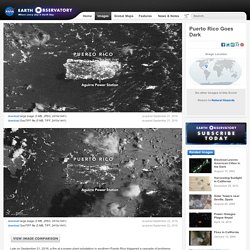 The event knocked out power to nearly 1.5 million customers. From space, the effects appeared dramatic. The Visible Infrared Imaging Radiometer Suite (VIIRS) on the Suomi NPP satellite captured these nighttime images of Puerto Rico before and after the outage. The upper image was acquired at 2:50 a.m. local time (06:50 Universal Time) on September 21, 2016; the lower image shows the island at 2:31 a.m. local time (06:31 Universal Time) on September 22, 2016. Both images were captured by the VIIRS “day-night band,” which detects light in a range of wavelengths from green to near-infrared and uses filtering techniques to observe signals such as gas flares, city lights, and reflected moonlight.