4/19/2016 @ProfTerryHughes "I showed the results of aerial surveys of #bleaching on the #GreatBarrierReef to my students, And then we wept." Great Barrier Reef: gbr reference map. Climate change at the Great Barrier Reef is intergenerational theft. That's why my son's in this story. The short film I’ve made with the Guardian stars my son, Toma, aged four years and five months. 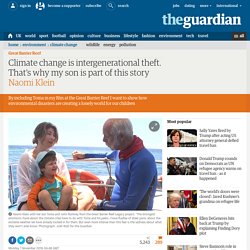 That’s a little scary for me to write, since, up until this moment, my husband, Avi, and I have been pretty careful about protecting him from public exposure. No matter how damn cute we think he’s being, absolutely no tweeting is allowed. So I want to explain how I decided to introduce him to you in this very public way. For the past eight years, I have been writing and speaking about climate change pretty much around the clock. I use all the communication tools I can — books, articles, feature documentary, photographs, lectures. Yet I still struggle with a nagging feeling that I’m not doing justice to the enormous stakes of this threat. All that information is important, of course. I was thinking a lot about these questions when the Guardian approached me about making a short film at the Great Barrier Reef while I visited Australia to receive the Sydney peace prize. 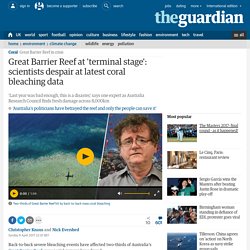 The findings have caused alarm among scientists, who say the proximity of the 2016 and 2017 bleaching events is unprecedented for the reef, and will give damaged coral little chance to recover. Scientists with the Australian Research Council’s Centre of Excellence for Coral Reef Studies last week completed aerial surveys of the world’s largest living structure, scoring bleaching at 800 individual coral reefs across 8,000km. The results show the two consecutive mass bleaching events have affected a 1,500km stretch, leaving only the reef’s southern third unscathed. Where last year’s bleaching was concentrated in the reef’s northern third, the 2017 event spread further south, and was most intense in the middle section of the Great Barrier Reef. This year’s mass bleaching, second in severity only to 2016, has occurred even in the absence of an El Niño event. *****As coral on Great Barrier Reef bleaches for second year in a row, a reminder of sea temperature trends in the region.

*****Ecosystem services: Ocean Acidification Could Cost the World its Coral... and a Trillion Dollars. Ocean acidification and coral reef damage is likely going to cost the world economy over a trillion dollars by 2100, according to a new report by United Nations (UN) experts. 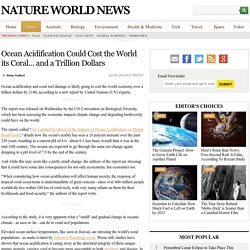 The report was released on Wednesday by the UN Convention on Biological Diversity, which has been assessing the economic impacts climate change and degrading biodiversity could have on the world. The report, called "An Updated Synthesis of the Impacts of Ocean Acidification on Marine Biodiversity," details how the ocean's acidity has seen a 26 percent increase over the past 250 years, resulting in a current pH of 8.0 - about 0.1 less basic overall than it was in the mid-18th century. The oceans are expected to go through the same net change again, dropping to a pH level of 7.9 by the end of the century. And while this may seem like a pretty small change, the authors of the report are stressing that it could have some dire consequences for not only ecosystems, but economies too.

(Photo : pixabay) What actually is coral? Why is it so important? And why is it on the front line of the climate crisis?