Subsistence farming / Subsistence fishing. Regenerative farming. *****A Farming Year – Hall Farm Park. Winter During the winter months the cattle are brought from the fields and housed indoors, the cattle usually come inside in November and will remain inside until spring. 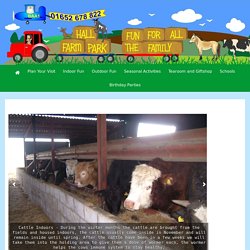 After the cattle have been in a few weeks we will take them into the holding area to give them a dose of wormer each, the wormer helps the cows immune system to stay healthy. Every day we go into the pens and put straw bedding down for them to lay on so they are kept comfy and also clean. The cattle have 24 hour access to water and hay or silage. *****Agriculture Gallery: displaying modern farming in the Science Museum diorama p115. Anna sur Twitter : "Why is the distribution of farming in the UK uneven? 1. Introduction to different farming types (hill sheep and arable) 2. Describe distribution using maps 3. Investigate the factors influencing the location of farming types… Intensive farming 'least bad option' for food and environment. Image copyright Getty Images Intensive, high-yielding agriculture may be the best way to meet growing demand for food while conserving biodiversity, say researchers. 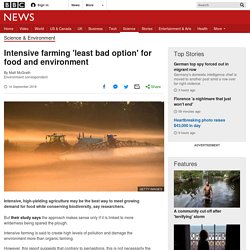 But their study says the approach makes sense only if it is linked to more wilderness being spared the plough. Intensive farming is said to create high levels of pollution and damage the environment more than organic farming. However, this report suggests that contrary to perceptions, this is not necessarily the case. Organic groups though have rejected the report's findings. Most common type of livestock by region across Europe. Surprised that not all of #Ireland was sheep country. Source. Twitter. Global spread of #agriculture output. GIF shows 23 #maps. You get 10 seconds per #map. For more images go here. #Map shows all the agricultural land in the world. Source. Simon Kuestenmacher sur Twitter : "Animated #map shows the #coffee exports of the largest producers nations over the last 30+ years. Global consumption increased and #Brazil in particular increased production accordingly. Source.

RTÉ Archives. How the gig #economy can transform farms in the developing world. Super quick recent #history of #agriculture in #USA in two charts and one #map: A smaller number of workers on a smaller number of farms produce more food than ever before. Technological improvements and switch to larger farms responsible. Source. Map shows pigs per square kilometer. Unsurprisingly many Muslim countries don’t even bother collecting that data. Also I had no idea where pig farms are located in the US. Source. Lambs carried by donkeys in special side-saddle as flocks of sheep move from pre-Alpine hills to summer pastures on Lombard plains. (via my sister, who knows important news when she sees it) The hidden poetry of Ladybird, pt 8 “A flock of lapwings is circling to come down and join in the feast. They have a flickering flight” #Tunnicliffe #ELGrantWatson… The terrible truth about your tin of Italian tomatoes. Two of Italy’s biggest food companies have been implicated in labour abuses of migrant workers picking tomatoes bought by thousands of British and European consumers every week, according to court documents. 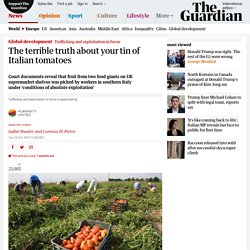 Italian prosecutor Paola Guglielmi has named food giants Mutti and Conserve Italia as benefiting from “conditions of absolute exploitation” in the country’s hugely lucrative tomato industry, as part of an investigation into the death of a seasonal labourer. Both Mutti and the Conserve Italia brand Cirio [see footnote] supply major UK supermarkets with premium tinned tomatoes and passata, and are named in court documents signed by Guglielmi. RTÉ Archives. *****Automation / Mechanisation: This is how a Tomato Separator works. *****1949: Rural employment / Primary sector decline since: BBC Archive is a sucker for a good potato clip. This one, from Arran, is frankly gorgeous. *****GCSE Agriculture? Now this seems a very sensible idea. #Countryside. #OnThisDay 1952: Picking plums? Piece of cake! Picking piles of plums? Possibly a problem.

I read in the death certificate of my gt gt gt g'father ('Farm Labourer') in 1873, his cause of death given as "exhaustion" #OToBeAHiredMan. Farmland is shrinking for the first time on record, so what does this mean for the future of food? *****UK agriculture & farming shot with drones (drone footage) *****Towy Valley Farm (drone footage) *****Boroughbridge Farm (drone footage, with cross-fade) 1930's Soviet textile. Tractors. *****Mechanisation in agriculture: The farmer's work horse, 1940s and 1963 #Hickling #JohnBerry. 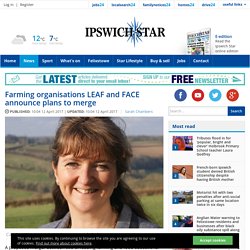 The two hope to increase their impact on improving education and understanding of farming, food and the environment through the merger, which, if approved, would take place in the summer. LEAF chief executive Caroline Drummond said it had never been more important to state the case for British agriculture. Both organisations have charitable status, have worked on projects together such as Countryside Classroom and LEAF’s Open Farm School Days and share many common goals. Farming: At the heart of our life. Tom Heap looks at the past, present and future of agriculture at the Science Museum.